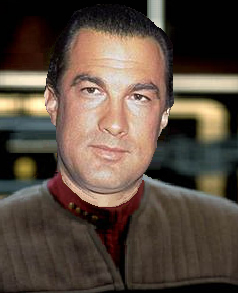 After years of retirement, William returns to Star Fleet after a call for former commanders to return to duty. The war took several good commanding officers and crews. Now with new ships and cadets to fill the the void, Star Fleet is turning to old veterans that can teach and lead a younger generation of officers and crews into the next century. Taking over command of one of the newest ships, Captain Drakno must take cadets from the academy and into the fire of a new frontier with hazards that they have never been trained to handle. Leaning back on years of experience, Drakno must show the crew how to due their jobs both on the ship and engineering projects that help thous who are in need. It's a risk that even Star Fleet admits will pushing the limits. Can it be done.

Ensign Drakno Graduates from Star Fleet Academy with Honors and assigned to USS Endeavour under the Department of Tactical
Operations.

Stardate: 62297.4
Commander William Drakno given command of the USS Akira and assigned to Task force 44

Personal File:
Drakno is the son of Ambassador Sel’lar of Vulcan and was born in a temple far from the main cities. It is believed this
was done as Drakno’s father was human and thus was raised in a V’tosh ka’tur temple so that his human side could be
better controlled. When he was old enough, Drakno was sent and tested at the Vulcan Learning Center, where his test
where confusing. It was latter learned where his up bringing was and thus assigned to a special skill dome that would
retrain him into a better Vulcan student. Drakno would go on to finish his training and applied to Starfleet where his skills
as a tactical officer was honed . Though Drakno’s passion for engineering was seen over and over through out his life
as he spent much of his off time helping build engineering projects. After Drakno retired from command, he joined the
Civil Engineering Corp where he spent his last 10 years working on projects all over the Alpha quadrant and is well known
for his skill and work as an engineer.