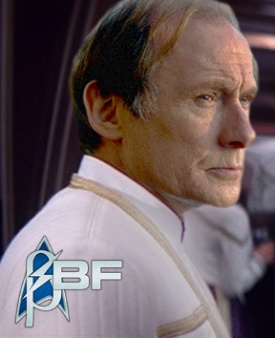 Chris entered Starfleet Academy in the year 2359, majoring in tactical studies and minoring in starship operations. Chris achieved high marks and graduated into the service 4 years later at the end of his academy period. He graduated Cum Laude and was awarded the honor of being on the Dean’s List. He was posted to the USS Baxter, fast-tracked to the rank of Lt. Junior Grade, serving as Assistant Chief Tactical Officer. After 2 years service in this posting Chris was promoted to the rank of Lieutenant. In 2369 Lieutenant Christopher Johnson was given the senior staff posting aboard the Baxter, filling the vacated Chief of Strategic Operations role. In the year 2372 Chris was again promoted, due to exceptional standards of work, to the rank of Lt. Commander. In the year 2375 Chris applied for command training and posting. Chris became Executive Officer of the USS Polaris during the Dominion War. During that stint as Executive Officer, his CO was killed in battle. Chris had to take command and bring the crew of the Nebula Class home. Out of a crew of 600, 347 came back alive from the Battle for Cardassia. The ship was so badly damaged it was scrapped and Chris went back to Starfleet Academy. There he taught Strategic Operations. In 2380 he was approached by Starfleet to take command of a newly commissioned ship, the USS Devestator. She would be one of the last Nebula’s built and they felt that Chris deserved his chance to command. He was given the Command of the USS Devestator-C and has held that post since.

Since Chris’s taking command of the Dev he has been Promoted to Commander, Captain, and finally Commodore, taking an important spot in the 4th Fleet’s Task Force 58 as it’s Task Force Executive Officer.

Due to his successful performance as Task Force 58 Executive Office, when Ta’pez was promoted to Alpha Division CO, Johnson was chosen to lead Task Force 58. After being promoted to Rear Admiral it was decided, after recent dangerous missions, that he should be stationed planet-side for risk of losing him in battle. He took over command of Hawkeye Island on Raeya 3. Though historically a marine base, there would be a Starfleet Command base built adjacent to the marine sector. He was posted there to oversee construction and command the Task Force.

At the age of 47, Johnson was becoming more experienced and obtaining more seniority. Bravo Fleet’s CO tapped him to lead an entire division. Beta Division would be his new command. At the opening ceremony for the major groundbreaking at Hawkeye he was promoted to Vice Admiral by Admiral Clarissa McRoberts. In a short amount of time Johnson found himself in the position of Executive Officer to the Fourth Fleet. Due to massive staff changes and retirements Johnson only served in that position for just under three months. He became the Commanding Officer of Task Force 86 for a period of time before being moved back to Task Force 58 to take up the position (again) of Task Force Commanding Officer.

Running Task Force 58 has became a full time job for an admiral in the Fourth Fleet. No longer was the admiral in charge able to fly about the cosmos looking for a fight. When Chris took command of the Task Force the first time he established the Task Force 58 Command and Control Headquarters on Hawkeye Island. In addition staff positions were added to the Admiral’s Office to ensure the smooth running of the Task Force. It was time for the admiralty to be rooted in specific spot that could be protected at all times. The Raeayan Sector is not exactly Sector 001, far from it in fact. Daily, the Office of the Admiral receives threats which are taken seriously no matter what. To that end, the Admiral-in-Charge was given a beefed up security detail to match that of the scale of a Secretary in the Federation President’s Cabinet. This detail continued into the new position of Director of Raeyan Sector Operations.

Eventually the Fourth Fleet Command Staff decided to dissolve Task Force 58. Ships were moved out of the sector and reassigned elsewhere. However, Starfleet still wanted to maintain an presence in the sector. The Directorate of Reayan Sector Operations was created and Johnson was tasked with running the office. Starfleet believed that this volatile area of space still deserved some attention.