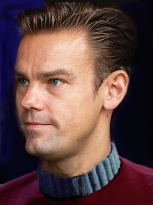 Warren Paige was a Human Starfleet Officer in the late-23rd century.

Warren was born on Earth in 2257 at the undersea Challenger Reach Research Center in Earth’s Western Pacific Ocean where his parents were employed. He spent his first few years at the facility before his parents decided that the ocean floor was no place to raise a child, so the family relocated to the village of Agana on the nearby island of Guam to provide a more suitable environment and from then on, split time between the research station and dry land.

Growing up on an island, water-based leisure activities were a large part of Warren’s upbringing.   He was an accomplished swimmer and enjoyed diving as well.  As a youth, Warren expressed a hope in one day joining his parents in their undersea research, but eventually found himself disinterested in hard science, and found other pursuits. As he grew older, the idea of pursuing a career that was connected in some way to the ocean still appealed and on a whim Warren answered a recruiting advert for the nascent Federation Naval Service, surely an exciting thing for a young man to do.  However, on the day of the interview, while waiting to speak to the naval representative, he partially saw a competing recruiting spot for Starfleet on the broadcast net and summarily opted instead to sail a different ocean.. an ocean of stars!