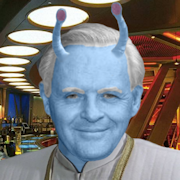 A round face sits atop an equally rotund body. Light piercing eyes seem to stare through anything they peer at. His smile is warm but calculating. His voice and expressions are jovial. There's an intelligence in his many gazes. He walks quickly, sometimes looking over his shoulders. Wrinkles and laugh lines showcase a lifetime of laughter and good spirits. General Overview: Thov th'Zeles is the type of person who smiles with calculating eyes. He sizes up every person and situation he sees. His personality comes off warm, though he still feels distant. One feels as if they can only get so close to the jovial Andorian. He has spent many years on a starship. It feels as if he's seen it all. Starfleet and the Federation carried on without him. Thov still felt he could be useful.

Children: Bosial th’Kaakret (60)(Mining Ship Captain)
Jhessa zh’Kaakret (58)(Tailor)
Sovi sh’Kaakret (55)(Doctor)
Kethev th’Kaakret(49)(Chief Tactical Officer – USS Ranger)
Father: Tob ch’Thyllehr (110)(Retired Starfleet Captain), Ryb th’Rethrol (111)(Diplomat)
Mother: Ithyraa sh’Vysrot (111)(Retired Starfleet Engineer), Sava zh’Kaakret(110)(Tailor)
Brother: Kihl ch’Kaakret (Deceased)
Ishrinaav th’Kaakret (85)(Biologist)
Sister: Vroro zh’Kaakret (77)(Station Commander)
Thov has a strong attention to duty. He’s come back to work for the good of the Federation. Retirement left him without a purpose. This role defines a new era in his life. He knows he can make a difference. The commander is professional and reliable on the clock.
The Andorian is easily distracted. He has love for a good Andorian Ale. Taking a shuttle on a trip to a cooler climate always sounds like a fun alternative to the daily grind. This leaves him always waiting for his next expedition.
His temper can also cause issues. He has also been known to speak off the cuff. Controversial remarks about the destruction of the Romulan home world are a black mark on his political file. More aggressive Federalists have supported him.
Ambitions:
Thov feels quite accomplished. His bondgroup has produced several offspring. He looks back on a successful career with Starfleet. There’s a part of him that feels like he can still do more. He’s 89 years old and watches his parents in their more advanced age.
The former Intel officer left retirement because it seemed like the galaxy was facing just as much turmoil as ever. Thov wants to make himself useful. He’s also curious to be ‘in the know’.
Thov has become a staunch Federalist in the past few decades. He has goals of going into politics and working with the Federation Council after his return to Starfleet.
Hobbies:
Thov has become accustomed to the finer things in Andorian life. His bonded Zhen has become a Flabbjellah of some ilk. Her songs are prized because they were written during an important time in Andorian history.
One of his mothers and his oldest daughters are tailors. They work with the especially soft Andorian silk. Thov enjoys their new wares, though he tends to tell them to keep his designs modest.
The former intelligence analyst is interested in all of his family’s business. His family has major ties to a small mining company. The mining industry is therefore on the back of Thov’s mind.
Such a large family gives the Andorian the need to escape every now and again. Exploring alien worlds has always been fun.
History:
Ensign th’Zeles started his career at Starbase 84. He spent his early career studying Romulan and Klingon operations. News from across the Alpha Quadrant came through Starbase 84. Thov was able to piece together the larger picture of fleet movements throughout the region.
Thov cut his teeth aboard the USS Miranda. The ship conducted a wide variety of operations, giving Thov a tour of the quadrant. He collected reports on various species.
His time with the Miranda ended in 2343Thov had been up for a promotion to Chief Intel Officer. A fistfight with a Vulcan over what he imagined was an insult saw Thov moved to a yearlong conference on Earth.
The trip gave Thov a chance for his bondgroup to have a third child. The family had two other offspring while Thov served on the Miranda.  The youngest would arrive not long after the Andorian returned to Starbase 84.
The Andorian put in six good years on an Excelsior class ship called the Decatur. This ship had a strong focus on intelligence gathering and scouting. It provided the fleet with valuable information.
Thov spent eight years between XO and CO positions on the USS Atlantic. The Steamrunner focused on the Neutral Zone during a critical time.
Command was taxing on a person who would rather enjoy life’s comforts. His bondmates had done well to establish themselves. They convinced Thov that he’d done enough for the Federation.
There are rumors that he continued to work with Starfleet Intelligence in unofficial capacities throughout his retirement. These proved to be somewhat true after he returned as an official consultant. Thov still continued to deny rumors of espionage during his years away from the Fleet.
He returned to Starfleet in 2396. Many thought he was old, but Andorians lived to be about 130 years old on average. Thov still feels young and imagines himself living closer to 140 or more. He restarted in the field of Strategic Ops, focused more on planning and coordinating tactics as opposed to gathering intel.
Commander Th’Zeles began his new career as Chief of Strategic Ops aboard the enormous Typhon class carrier. This was totally different from anything he was used to. It was a test given to him by Starfleet to see how he would adapt to a different fleet.
Thov did well, proving himself useful and earning his spot as the ship’s executive officer. This was another test to see how well he could handle command situations. It became clear that his experience was still relevant.
He received word that he was to move to Starbase 72 where he would prepare for command. Limited spots for command left the elderly Andorian in a holding pattern. This was valuable time for him as he used it to train and study. He felt less like an outsider and more in touch with modern Starfleet. Commander Th’Zeles is also using this time to scout available crew members he could request for his senior staff.