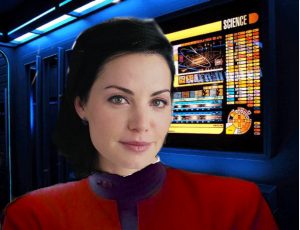 Born in 2355 to a pair of Starfleet Officers on a border outpost on the edge of Cardassian space. When she was two years old the outpost was attacked by the Cardassian during the Border Wars. During the attack the Cardassians boarded the station and massacred a majority of the crew before retreating when the U.S.S. Rutledge and U.S.S. Gettysburg arrived and rescued the survivors including the two year old Juliette Hewitt. She was sent to Earth to live with her maternal grandmother. She grew up in awe of Starfleet and joined the Academy after she graduating from High School. In 2373 the Federation found itself engulfed in a war, and was taking extreme losses. All Academy Cadets were rushed through the Academy to fill vacant spots due to losses. Juliette was assigned to the Nebula Class USS