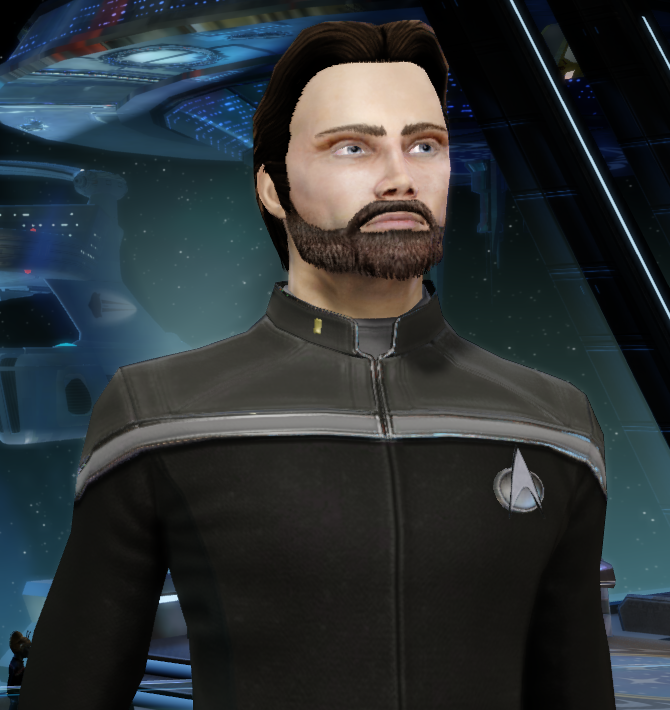 1.77M long, with a weight of 55KG. He has brown hair with blue eyes. His hair is often short and quite messy. His personality, however, is something that some captains find, leave something to desire. He can often be quite sarcastic or brash but has his heart in the right place. When under stress he can be snappy but is always ready to get the job done. He sometimes wears glasses to protect his eyes from bright lights as they sometimes give him migraines.

Grew up in the Netherlands on earth. His hometown was nothing to write home about, a little place called Hoofddorp. He, however, moved to England quite early on in his life. And that is where he stayed most of his youth. He was interested in computer science and took those classes with quite some delight.

Wanting to join Starfleet he arranged for a place in the Starfleet Academy. His dream was to go and explore space.  He was not sure what way to go, what position to study for but soon he learned that he would be most happy as an intelligence officer. His knack for communication sciences would help him excel within the intelligence branch. His knowledge about encryption and decryption methods would help in more than one occasion. As time went on and his studies got more in-depth he gained more confidence. At one point he even became the fastest student in the academy when it came to decryption of messages. This earned him a high accommodation.

After his studies, he went on to become an officer on the USS Teardrop. This being his first starship to serve on, it would become one of his most beloved ships. He first served as Intelligence Officer under lieutenant-commander Cerkis. With the Dominion War happening he would discover that the intelligence officer had a hard task on the ship. They would have to manage a lot of information and filter this to the most useful bits. Seeing the stress his commanding officer was under he wanted to, one day, develop a method to keep his head cooler. This anti-stress method as he called it would become something of a passion project for him. During one of the more “sensitive” missions, his commander would turn up missing. This made John rise in rank to Assistant Chief Intelligence Officer. At this rank, he became one of the most promising officers on the ship. His high point was during the Dominion War. He was faced with an almost impossible code to crack but managed to do so. This made sure that the crew of the USS Teardrop survived an ambush. This post he served on for many years, eventually receiving the offer of this post on another starship sent out on a mission. This would gain his preference and he was transferred. The USS Strahd became his temporary home until the post of Chief Intelligence Officer was offered to him on the USS Diligent.