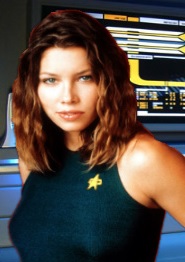 Alexandra or “Alex” as her friends call her, lived on Earth, San Francisco to be exact. Alex’s parents had a good marriage despite how much they were apart. Her father, Mack, was a teacher but not at Starfleet Academy. He not only had to be Dad but Mom as well but he was okay with this arrangement. Her mom, Vicky, served on various ships and settled on the USS Essex as Captain T’Lar’s first XO when she took command. She had to retire one year later due to health concerns.

In 2372, Alex married her high school sweetheart jock, Ruben, after finding out she was pregnant. In 2373, she had her first child, a boy named Paul. When Paul was around 6 months, Alex decided to further her education in order to get a career. She chose Starfleet Academy and began her schooling there. Her husband didn’t want her to go but stay home and be a mother and housewife. She had other ideas. This caused friction between them. By the time she finished Starfleet Academy, her husband refused to live his life on a ship and didn’t want to stay married to her. When she got her first assignment, he filed for divorce and custody of their son…he won. He was living on Earth in a stable home versus her on a Starship. The judge felt that a starship was no place to raise a child at the time especially as she decided to be in security and tactical which the judge deemed a dangerous career.

Alex didn’t begin classes at Starfleet Academy until she was 19. She had some training in first aid and self-defense and worked out three to four times a week, even after she was married. She continued until Paul, her son, was born. She resumed self-defense classes after she was accepted into Starfleet Academy, adding Anbo-Jytsu which is required at the Academy. She took the usual courses that a Security/Tactical major would take. Among those courses were weapons, Unarmed Combat, Diplomacy, Electronics Operations: Phaser, Security Systems and Phaser Cannon, Small weapons combat and Tactics: Small Units, and Terran Psychology. She also studied some medical in case she needed to use it on a mission. She did great in the security part of her job but the tactical didn’t come easy. She had to work harder and spent a lot of time on the holodeck doing simulations specific for her job. She improved immensely, able to hit most of her targets. After graduating, she was assigned to the USS Essex under the command of (now) Admiral T’Lar as a security guard and tactical officer. T’Lar, as a favor to her mother, requested Alexandra.

Two years later, she transferred to the USS Pegasus as ACS/TO eventually becoming CS/TO. She was promoted to Captain. Her ex-husband died, giving her sole custody of her son.

Alex gave birth to twins, Alton and Adora in the early part of 2393. Alex is now the Special Operations Group Executive Officer on Starbase 400.