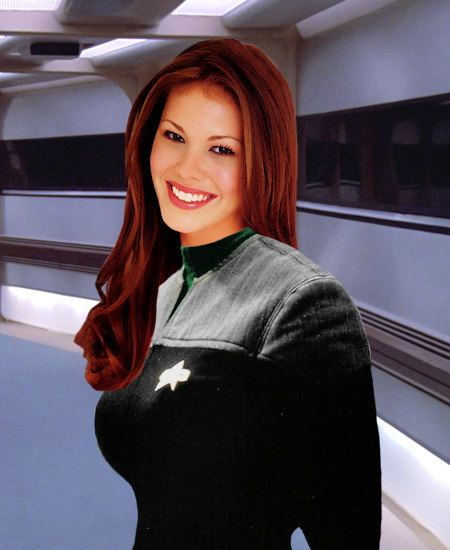 Sara Beth grew up in the rural town in Georgia. Her childhood was rather normal for a child of such upbringing, with no unusual happenings occurring for most of his first 17 years of life. While she spent a good majority of her time playing sports, and otherwise building her body, Sara also spent a good portion of his time in libraries, studying Earth history, mainly the history of Earth wars.

During her first four years at the Marine Academy, Sara showed remarkable skill for managing personnel and planning battle strategies. Her leadership skills were surprisingly developed for someone so young, and her ability to garner results from anyone she was placed with was the subject of much admiration.

Upon leaving the Academy, 2nd Lt. Mattis was given, and subsequently accepted a position in a Starfleet Intelligence Team that would soon change his life. Then Commander Brian Gentry saw potential in the fresh faced young 2nd Lt. Because of her superior ability to garner trust and information from people she came into contact with, 2nd Lt. Mattis’s first assignment was as an Intelligence Officer, a position that gave her broad experiences and contact with virtually all the members of the large intelligence team. After a few years serving as an Intel officer, 2nd Lt. Mattis requested that she be transferred to an area where she would gain a much more useful set of skills to aid her in her mission.

Her request was granted in the form of Weapons and Demolitions Expert, where she spent several months training with some of the best operatives in the field including her soon to be husband Richard Wayne. Because of her desire to learn, Lt. Mattis mastered most of what she was taught, though her level of competence began to fall off after she started to let her feelings for her husband cloud her judgement. This did not diminish her effectiveness, however, and she went on to serve in the post with remarkable flair and style. Several notable, though classified engagements with Federation enemies saw the inventive use of explosives not only to distract and confound the enemy, but to aid the team in the completion of their missions, something that greatly impressed Captain Gentry.

Her next transfer was one that now 1st Lt. Mattis never asked for. Because of her undisputed mastery of all things destructive, Capt. Gentry decided to test Lt. Mattis’ ability to use stealth and cunning to get a job done, rather than brute force and a hail of weapons fire. Such a complete shift in roles was indeed a challenge for the Marine, and though she was dealing with the breakup of her marriage, she forged on. Her first mission as an Infiltration Expert proved too much for her limited experience with the covert world. In the midst of a rather important and highly classified mission, Lt. Mattis inadvertently destroyed a power distribution network, causing herself and several team members to be discovered and captured after a lengthy battle against superior numbers. Thankfully a rescue operation swiftly spirited them away before their existence could be made public and their entire mission compromised. Subsequent missions proved far more successful, and Lt. Mattis’s exploits soon earned her notice of the powers that be in Starfleet Security.

With the Reopening of Roosevelt Station Starfleet was looking for experienced officers to help make the new roll out smooth. They approached Sara and offered her the Chief Security/Tactical post and she accepted.