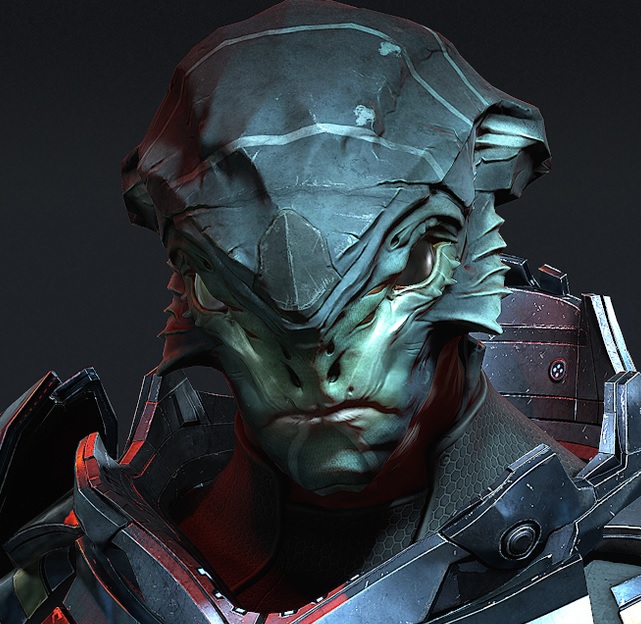 Nearly a decade since contracting a disease that consumed nearly eighty percent of his body, Fynn survived and was extensively rebuilt with cyborganic and synthetic components. He survived, recovered, and with a great deal of time and assistance, returned to duty. Now assigned to the USS Ride as her chief engineer, Fynn seeks not only to continue to survive, but to thrive.

The Chodai in general are humanoid, with a head on top, two arms and two legs. Hands each possess two grasping digits and a thumb, while each foot has two long toes. Their skin can vary anywhere in the blue or green color spectrum, and they have numerous plate-like bony growths on their bodies, most notably on the top of the head, the hips and shoulders, which offer a degree of physical protection. The Chodai only evolved beyond their water-breathing ancestry in the last ten millenia, and as such most Chodai still possess inner eyelids, webbed digits, and vestigial gill structures.

A typical example of his people, Fynn eventually grew to just over two meters in height, with skin-tones ranging from grey-blue over the epidermal plates, to pale green. He has four nostrils, two large, dark eyes, and vestigial gill structures around his eyes and upper cheekbones. At twenty seven years of age, Fynn contracted Skarin Syndrome, a Tzenkethi wasting disorder that proved especially virulent against the Chodai. The disorder attacks nerve and muscle tissue, and rapidly leads to death if left untreated. As established treatments proved ineffective on Chodai physiology, the only recourse was excision of all effected tissues. While this procedure ultimately saved his life, it also left him with only twenty percent of his original body remaining, that primarily being most of his head, spinal column, and vital organs.

As it was likely a small genetic anomaly that left him vulnerable to the disorder to start with, the medical consulate opted against attempts to clone new body parts for transplant, but instead grew him a new cyborganic body, piece by piece. While his body shape would remain the same as it had been before infection, most core bones and muscles were replaced by synthetic variants, and both arms and legs were entirely artificial. With extensive rehabilitation and training, Fynn has learned to function almost as naturally as his old body, and has been fully trained on the maintenance requirements and upkeep required.