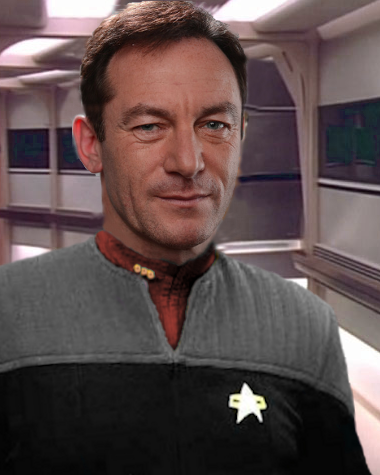 Classic Academic would be the logical moniker: tall, hawkish, but overall bland in appearance, and a little round about the midsection. He looks like a kindly librarian, someone bookish and unassuming. This, my friends, is a trap. He has risen through the ranks of Starfleet like a mountaineer, wielding a climbing axe with precision for the backs of others. What credit he can take for himself he will, and blame slides off of his snake oil salesman charm. In another time, and in another place, Benjie would be a fear head waiter at a French restaurant. But in 2389, he is the Commander of Canopus Station.

Abrasive, superior, ‘to full of himself’ and hinting towards a God Complex, Benjamin Ingram would be a danger to himself and others if his ego’s balloon-thin skin wasn’t popped every now and then. To be fair when you use a word genius, the term crazy follows closely on its heels, and for Mr Ingram, it’s all too true. After all, he’s smart, and if no one else can even think on his level, who really needs them anyway. The little people only help the gifted, they don’t become gifted. So indulge him, play to his ego, but like any uppity Springer Spaniel do not hesitate to hit him on the nose with a newspaper. Some science types only learn through the try/fail system.

Benjamin is a man with his eyes full of stars. He seems to believe that all of Starfleet is for his personal use to get him closer to those stars, and resents the fact that his personal chauffeur serves comes armed with phasers and photon torpedoes.

His interests are academic, and food adjacent.

Interpersonal skills, or a lack thereof. in fact where ever he goes people transfer out of his way like he’s able to part the red sea of paperwork. Though we’ve not told him that, given his ego is dangerously close to collapsing into a star.

To be seen as the one true genius he knows he is. And, also, to get back at the snooty, stuck-up Vulcan’s who decided he was not up to snuff to go to their prestigious school.

Anything science related though he does have an odd fascination (some might say fixation) on botany. He also has a fine appreciation for single malts and orbital skiff racing, though please don’t bring that up or you’ll hear about how he won the Saturn Lunar Freestyle almost single-handedly.

Benjamin Ingram is a gifted man, the same way Beethoven was a gifted man, and Alexander Bell. From an early age, these were terms bandied about by his parents, both respected scientists and engineers, and they were nothing if not correct.

It was, however, a shame their child heard them say that so often.

Ben grew up in a house where he was the centre of attention, every mental task catered for, every whim appeased, and he excelled at any challenge set before him. This set him apart from the other kids in his classes, and whilst they were happy to play dodgeball, Ben was more interested in the fluidic flow dynamics of the air around the ball as it flew right at him.

This led to Benjamin’s aversion to doctors, nurses, and the medically inclined.

Things did not get better as he grew older. With his keen, startling intellect Benjamin jumped classes and grades like an Olympic hurdler heading for a gold medal. By his early teen’s he’d applied and been accepted to most earth based universities and educational institutions, which allowed him to pick and choose his own subjects of choice.

At CalTech he helped to perfect the then next generation antimatter containment vessels that would go on to power some of the most renowned vessels in Federation history.

At MIT he was part of the team that nearly created an artificial intelligence that could surpass the Truing/Becker Test, but alas that final hurdle of Professors Soong’s experiments never got further than the chess playing variety.

Mars U was less academic than Ingram had been led to believe, but hands-on work in the ongoing Terraforming projects gave him the practical skills to bring out the more devious side of his intellect. Even to this day, there is a food processor in Chasm City dedicated to Benjamin Ingram, creator of the first artificial chocolate brownie, ‘The Benji Bake’, that didn’t taste like cardboard, and contained no calories.

Weight Watchers filed for bankruptcy the day following this.

His application and subsequent denial of entry into the Vulcan Science Academy has been the first recorded incident of a human being given a special invitation by the Vulcan High Command to get onto the next ship to leave Vulcan should he ever return.

Having failed to get into his first choice of superior learning establishment, he went for his second choice: Starfleet Academy, where the best and brightest from across the Federation were brought to excel and serve the greater good.

No one told Ben’s ego of this fact.

It was also to be the place where Benjamin Bob Ingram would meet his exact polar opposite, soon to be wife, and shortly after that ex-wife. They were polar opposites, as previously stated, like two sides of the same coin. Whilst Ben’s focus was on astrology and astrogation, her’s had been along starship propulsion systems and ship handling. In short, he knew where he was going, and she could get them there. This led them to win the Starfleet Academy Spatial Awareness Acuity Test three years in a row, earning them both the prestige and envy of their betters.

Unfortunately, this teamwork in the workplace did not translate to teamwork out of the workplace. They’re lifestyles and choices matched as well as their personalities, and after 6 years of marriage (Thanks to Starfleet assignments that translated to six months of time spent together), they decided to call it quits.

Well, Ben decided to call it quits, but that’s beside the point.

After that and four years of dedicated service to Starfleet, Ingram’s request for reassignment to the USS Odyssey as her chief Science Officer. And along with his flaws, his defects and foibles, he brings with him to the ship his ego.

After near disaster, from which he walked away (mostly) unscathed. he returns to Starfleet still enamoured to the idea that none of what happened was his fault. After all, it was the Captian who didn’t listen to his sage advice, and if he’d been in charge by thunder things would have been a might different.

And there inlines his new plan: if you can’t beat’em, make your own club. It worked when he was a child making friends, it’ll work now. Officer track was going to take him to command one day, might as well hit the fast-forward button and talk to the right people.

Executive Office Ingram…huum…sounds almost as good as Captain Ingram. Yes. Station Administrator…now that’s a title worthy of note. Not only at the forefront of a new frontier for all of the Federation, but poised in such a way to make sure his name lands on prominence.

It would be easier to list the wake of transfer requests and quietly hushed up complaints than it would to detail his time in Starfleet.

He breezed through the Academies academic courses with ease, helped by the previous tenure at other learning establishments before embarking on his career. Where he failed was in the more physically demanding courses, and there is an embarrassing holovid recording of a personal defence training session where he was turned into a human pretzel by the petite Bajoran instructor.

Since then he has given more respect to the Security officers he’s served with, even if it is just a guarded assurance they all know what one trick. His trainee cruise ended with middling scores, but given his academic and scholastic record he was headhunted from the Academy to help man the Farside Observatory on Luna, and then as an assistant astrogator for the Kesler Deep Space Array.

But if you want to command, you need some light years under your belt. So far he has (by some magic of Starfleet Personel) managed to land assignments on dedicated science vessels. And whilst on those ships been indispensable in their work, including the discovery of a tri-pole microscale blackhole in the Gamma Draconis star system, they did not fill him with the desired level of respect his name promised him.

There were rumours he had transferred, albeit briefly, to the Federation Colonial Administration for a time for unknown reasons. But given this department of the Federation deals with the founding of new colonies, not scientific discoveries, seems a little far fetched. Probably rumour mongering.

This would be his second attempt at gaining access to the XO role, and one he nearly got on his previous assignment to the USS Odyessy. There are rumours, and vague ones at that, that the fix was in. Money might no longer be the driving power of the universe, but prestige and power certainly are. And Ingram Nanoscale Systems has that in spades, enough for Benjie to quietly use its influence to weigh the scales.

His second went as well as one would hope.

But his third…well. That one came as a gift from the gods.