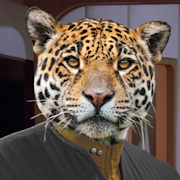 S’Toriin was born on Cait with his sister S’Noraa, but growing up never truly felt completely at home. While, he loved his homeworld and is very loyal to his people he felt the need to do something greater than himself. In 2376 he got that chance when he took the Starfleet Academy entrance exam and was one of four Caitians selected to join the following year. His sister S’Noraa was one of the others to join as well.

At Starfleet Academy he studied Warp Theory and Structural Dynamics while his sister went into the biology field. Starfleet wasn’t always easy, but he enjoyed both the challenge and the company of his sister when time permitted. S’Toriin had to study constantly in order to keep up and sought tutoring on a regular basis as well.

In 2381 after four years of struggling he finally succeeded in graduating from the Academy near the bottom of his class, but at the very least he made it. His first assignment was as an Operations Officer aboard the USS Benzar. The Benzar was an Intrepid Class starship named for the Benzite homeworld and the first time that S’Toriin would be away from his sister.

The first year he struggled to fit in away from both his sister and his family were difficult challenges, but he met them head on. He consistently proved himself to be confident and loyal to his fellow officers and while not the brightest operations officer he had a knack for engineering subsystems. Granted neither were in his field he would eventually request a transfer to work specifically on the various subsystems of the ship.

In 2383 he was promoted to the rank of Lieutenant Junior Grade following several excellent evaluations by the Chief Engineering Officer. He continued to strive to be devoted to his duties aboard the starship that he had began to call his home. S’Toriin began looking to make a huge career move by 2385, but nothing was available that he was interested in. S’Toriin was promoted to Lieutenant in 2388 before transferring to the USS Onnar a year later as the Chief Operations Officer having opted to switch from engineering to Starship Operations.