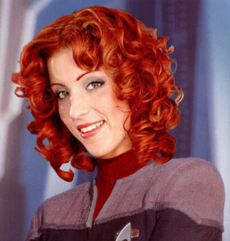 Anatrie Kheim (pronounced an-NA-tree KEE-em) is a devoted and decorated Starfleet officer, having spent the bulk of her career studying Federation and interstellar law, and served several admirals during court martials and other judge advocate general operations. She is also a rapidly-rising star in Starfleet's diplomatic efforts throughout the Alpha and Beta Quadrants, known for her quick assimilation and agile adaptation to foreign cultures. Contrastingly, at times she can seem almost uninterested or lackadaisical, although her ennui has never impacted her career. Her friends know her as a richly-cultured and well-spoken individual who sometimes comes across as whimsical and sometimes impulsive.

Anatrie is the only child of traveling entertainers. Not really knowing any permanent home, the Cirque du Soleil-type performance troupe traveled across the Alpha Quadrant, spending the bulk of its time on the major resort worlds and Federation core species’ capital worlds. Anatrie’s birth was actually an accident, the result of a too-long transit between destinations and certain preventative medications not being available for a short amount of time. She was raised more by the troupe and less by her biological parents, and the troupe enjoyed a luxurious and decadent lifestyle upheld by Ktarian cultural mores. Anatrie was exposed to a variety of illicit drugs and other hedonistic activities as young as twelve.

The stigma of her great-aunt Elena’s crimes against the Federation was realized when she entered her teenage years, and as a result began to dislike the troupe life when the troupe was denied performing rights based on her father’s distant familial association with the criminal. Eventually she asked to return to Ktaria where she would stay with family friends and finish her secondary schooling. She had her performance skills, and was extremely popular amongst her peers, and participated in student government as well as Mock Federation Club, becoming president in her senior year.

Unfortunately, Anatrie also took her addictions back to Ktaria with her, and, unchecked by more experienced indulgents, things quickly got out of control. After a brief stay in a Federation addiction center, she got the idea to join Starfleet and prove (mainly to herself and her family) that she was above base addictions and desires, what were above what Elena had done. As her life story made for a compelling application, as well as her cultural-roundedness combined with good grades and excellent extracurricular activities, she was accepted.

The bulk of Anatrie’s studies at the Academy were around the social sciences, and it seemed that she might’ve been on track to enter the counseling program – which would be ironic consider her own history with counseling. She became enamored with Dr. Robert Franck’s theory on quantum probabilities of alien cultural patterns, which she ended up turning into a holodeck model. Dr. Franck wrote a paper using Anatrie’s preliminary results, but the paper was dismissed as unprovable pseudo-science. This publication, however, opened a door for Anatrie to serve her Cadet Cruise aboard Starbase One as an exocultural analyst for Starfleet Intelligence.

After serving a two years aboard Starbase One in service to the SI office there, as well as concurrently completing a Master of Laws degree, Anatrie earned a promotion to Lieutenant JG and was assigned to the Nebula-class USS Prometheus as assistant diplomatic officer and attache to the ship’s JAG officer. Her main responsibilities involved advising her Captain on what to expect on First Contact with unknown warp-capable species, and pre-warp civilizations. She remained aboard the Prometheus until her promotion and reassignment to the USS Devonshire, where she served for two years under Commander Braxton. Unfortunately, while she had plenty of duties aboard the Devonshire, the Gorn conflict did not go as expected and hostilities prevented much of what Anatrie excelled at — negotiation and cultural exchange. An opportunity at her old stomping ground aboard Starbase One, opened up — with the Judge Advocate General’s office — and she applied for a transfer. She was a diplomat and a xenoanthropologist, not a soldier. Both Braxton and her XO, Commander Braddock, saw this, and permitted the transfer.

The 2390s were a dark time for the Federation, with demanding member-species seeing the effectiveness of the ultimatums that prompted the synth ban of 2385. Anatrie was assigned as a VIP diplomatic officer to several different starships engaged in “fire duty” throughout the Alpha and Beta quadrants. While this virtually eliminated her chances as gaining additional starship command experience — and by extension a command of her own — she still rose in rank due to her accomplishments and recognition with her superiors.

Anatrie considered retiring from Starfleet towards the end of the 2390s, feeling particularly frayed at the edges from her constant travel and frenetic schedule. After taking some extended and hedonistic leave in Ferengi space, she was surprised with a new assignment, specifically requested by name by two Admirals at Starbase 38 — a new effort at the far end of the newly-stabilized Barzan wormhole. Enticed by the notion to interact with and study Delta Quadrant species first-hand was enough to shake her out of her temporary funk.

Anatrie’s drug treatment and counseling continues to this day, as her drug of choice – a derivative of Ketracel White manufactured by the Ferengi and the Orion Syndicate – has left both psychological and physical scars. As a result, she sometimes drops into fits of disinterest and ennui; these bouts are temporarily alleviated by the use of special non-habit-forming psychotropics prescribed by Medical.