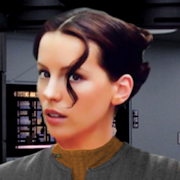 Chelsea Mae McDanielson was born in 2351 after her two older brothers Jason and Carson and, is the only daughter of Jennifer and Thomas McDanielson. The family lived in Alaska near Anchorage during her childhood. Her father Thomas was an engineer responsible for the upkeep of the planetary weather control systems on the planet and her mother was a botanist who traveled quite frequently up until they both retired. Her brother Jason joined Starfleet as a science officer and Carson became an oceanographer working on Earth.

When she was old enough she followed her brother Jason by going to Starfleet Academy after being accepted in the engineering program. Chelsea had high expectations and hopes for her future wishing to design future ships. She specialized in quantum mechanics with a minor in spaceframe engineering. She graduated early in 2373 and was assigned to the USS New York, a nebula class starship, as a junior engineering officer at the rank of Ensign. Shortly after her assignment the Dominion War broke out and the New York was put on the front lines. The vessel was destroyed early in the war and Ensign McDanielson was injured while getting personnel to the escape pods from engineering.

She was given several awards and, was reassigned to the USS Helena remaining an engineering officer on board the ship she was reassigned to. The Helena saw combat when the Seventh Fleet tried to stop the Dominion at the Tyra system. The Helena was one of fourteen ships to make it back to the lines, but suffered heavy damage. Chelsea took command of engineering when several of the high ranking officers were either killed or wounded in the battle. She was able to keep the warp core from breaching by increasing the power around the warp core. Following the battle the Helena was reassigned to the Ninth Fleet after undergoing repairs and the retaking of Deep Space Nine.

The Helena was destroyed at the second battle of Chin’toka where Chelsea was wounded and had to be carried to the escape pod. Following the battle she was promoted to the rank of Lieutenant Junior Grade and reassigned to Starfleet Headquarters for the remainder of the war. Following the war she was assigned to the Utopia Planitia Shipyard in order to work as a development engineer. She helped in both the development lab for new designs and also helped the department responsible for the fleet rebuilding project.

In 2380 she was promoted to the rank of Lieutenant and selected to lead the development department herself. Chelsea remained ambitious setting her mind from the rebuilding efforts to developing a new engine design that would be more efficient. While, her full design was not used several of the ideas were implemented on the refit project on several Nebula and Galaxy class starships. She worked on the project for three years before being reassigned to another project.

Chelsea was eventually promoted to the rank of Lieutenant Commander in 2387 before being assigned as the Chief Engineering Officer of the shipyards. However, she steadily began to loose the ambition and drive that she once felt and, needed something more out of her career. In 2389 Chelsea took a position as the Chief Engineer of the USS Onnar. But, she continued to desire leading the entire Starfleet Corps of Engineers.