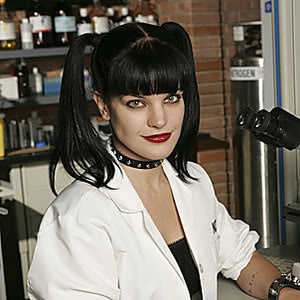 Gazelle is currently the commander of the medical services detachment assigned to the Third Marine Expeditionary Unit.

Gazelle is an only child, born to Marcus and Gail Girabaldi in August of 2336. From a young age, Gazelle disliked the bizarre name that her parents had given her, insisting on being called by such nicknames as Zelle and Ella. Her childhood was relatively uneventful, but as she grew older she developed a personality as bizarre as her given name. Unlike other young women, Gazelle was deeply into the Goth subculture, collecting a number of tattoos, most easily hidden, before she joined Starfleet.

Gazelle graduated high school early, at the age of sixteen, after being skipped ahead two grades to provide her with more of a challenge. Because of this, she was able to enter college earlier than the usual age. Due to a compulsive study habit (and taking as few elective courses as possible), she was able to finish college in slightly more than two years, moving on to medical school.

During her four years at medical school, which could not be rushed in order to obtain the proper necessary experience, she was seen as a bit of an outcast due to her admittedly strange personality. This did not bother Gazelle, as she preferred to work alone anyway. During her last year, she decided that she wanted to join Starfleet and applied to the Academy despite being older than the usual age.

At the uncommon age of twenty-two, Gazelle entered Starfleet Academy’s Medical Emphasis program. Because she already had more education and medical experience than most of the cadets, she was easily bored by the curriculum. Nonetheless, Starfleet insisted that she take the course at the same pace as the other students. She made few friends at the academy, due to a mix of her bizarre personality and how easily she managed the course material.

At the age of twenty-six, Gazelle graduated Starfleet Academy as an ensign and was posted to her first starship, the USS Basilisk, as a medical officer. She found the experience as a junior officer lacking, but the captain of the Basilisk was a firm believer in the general formula for promoting officers, forcing Gazelle to remain at the rank of ensign for all of her three years on board.

In 2365, she transferred to the Centaur and received her first promotion. Though she held the same position that she had served in aboard the Basilisk, Gazelle was given more to do, even as far as working in the on board medical laboratory. She received her second promotion earlier than usual, in 2367, after publishing an article in a well known medical journal.

Shortly after publishing that article, Gazelle transferred to the Phoenix, where she served as the Assistant Chief Medical Officer. With her job now a bit more of a challenge, Gazelle was happier, if that was even possible. Even though her interests and sometimes odd appearance had a tendency to drive people away, she had several friends on the Phoenix and even dated the Chief Engineer for a short time.

Finally, in 2381, Gazelle earned her first position as a member of a starship’s senior staff when she transferred into the Chief Medical Officer position aboard the Thestral. She made commander shortly after her assignment there. Though she enjoyed her work and her stay aboard the Thestral, Gazelle began to dream of working in a more advanced sickbay, especially with new advances seemingly made every day.

In 2385, Gazelle was unexpectedly transferred to the USS Healy, an Insignia class starship with an expanded mission profile. The Healy answered calls to all sorts of situations, and Gazelle found her work there exhilarating. She made several friends and quickly molded the ship’s sickbay to fit her unique style of medicine. When Gazelle received an invitation to join the 3rd Marine Expedition’s mission as the head of their medical attachment, she found the moment incredibly bittersweet. Though she would miss her friends, she was excited to have the opportunity to join the expedition and readily accepted.