A terrible encounter that kills many of the senior staff of the USS Endeavour also reveals a new threat: the Wild Hunt, a pirate gang operating with impunity within Federation borders.

But no, I was out for stars;
I would not come in.

For the seasoned crew of the USS Endeavour, answering a freighter’s distress call should be routine. But the pirate attack on the Perth turns out to be anything but, ruthless tactics and an on-board accident leaving Endeavour crippled and many of her crew dead and incapacitated, including beloved Captain Leo MacCallister. Starfleet at once realises these pirates, a gang named the Wild Hunt, are a well-armed and equipped organisation that have operated with impunity under the noses of Federation authorities for months on end, and a response is essential.

Dragged from the Academy back to frontline service, veteran investigator Commander Matt Rourke is assigned as Endeavour’s new captain. But more than the pursuit of pirates, he finds a scarred and embittered crew resentful of change, both of the new faces and new their mission profile. Success will take more than eliminating the Wild Hunt, but winning their loyalty. 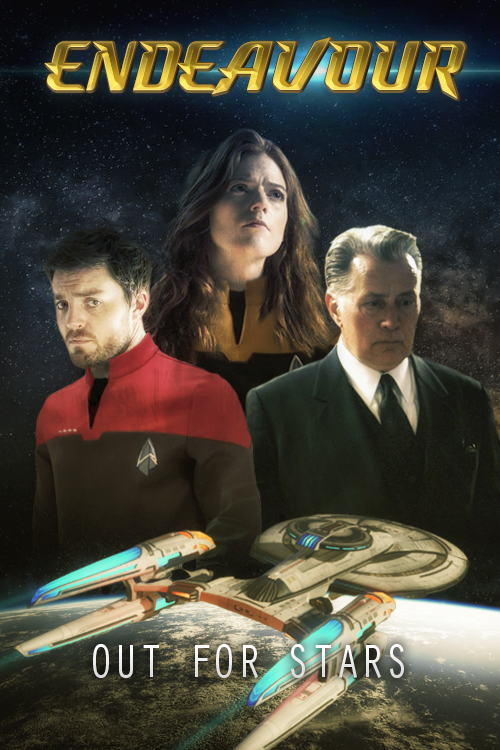 Looking for a Welcome Wagon

It was three long years since Kharth had served on a starship. A starbase was different; a starbase was a city floating gently in the cosmos. But starships ultimately existed only for their work. This extended to the off-duty facilities; a gym was a place to train, a mess hall somewhere to grab [...]

After days penned up on his new ship, the peerless blue skies of Bismarck II were begrudgingly welcome to Rourke. It was an old settlement, one of the first of a fledgling United Federation of Planet’s colonial ambitions, racing for the stars as far as they could reach. Some called it idealistic [...]

The bridge was such a bustling hive of activity that Connor Drake almost crashed into someone the moment he exited the turbolift. Only with a neat side-step did he avoid collision, throwing up his hands. ‘Woah, sorry. Sorry. ‘Scuse me.’ Less than twenty minutes from launch, he’d expected [...]

Upside-Down Within a Day

No artificial scents piped through the life support system could fully mask the disinfected smell of Starbase 157’s infirmary. Valance had spent more of her life than she cared to contemplate in medical facilities, and still it hit the back of her nostrils like an unpleasant stench, summoning [...]