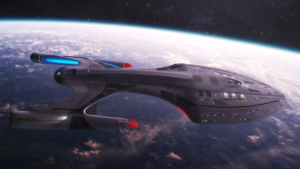 The Argonaut-class starship is a combination light cruiser/light carrier developed as a more combat-oriented version of the Intrepid-class. Though initially intended to serve during the Dominion War, these vessels didn’t enter service until the early 2380s due to design challenges. Currently, they serve with distinction in both exploratory and tactical roles, using their considerable armaments and variable small craft complement for both purposes.

Compared to an Intrepid-class starship, an Argonaut-class starship is both slower and has fewer science labs, but it balances this out by being able to embark a number of Volga-class runabouts, which extend its exploration range tremendously over its older sister, which generally only embarks shuttlecraft and perhaps a single runabout. Like with the Rhode Island to the Nova, the Argonaut compared to the Intrepid has more mission-configurable labs and is suited for general exploratory missions, but struggles with in-depth scientific surveys, while she retains the long-range sensor arrays contained in the Intrepid, and so is ideal both for front-line exploration and reconnaissance missions for the fleet. The tactical capabilities of this craft make it capable of exploring in areas that are not secure enough to send other light vessels, as it can comfortably fight its way out of most trouble spots.

The Argonaut-class is suitable for first contact missions, as it is sufficiently well-armed to travel alone when the tactical situation is unsure, but also not so heavily armed that it would represent an obvious threat to other races. It has similar capabilities to the Intrepid, with several conference lounges and VIP quarters that can be configured for a number of different atmospheres. The ship is also adept as a diplomatic courier, given its speed and armaments.

The Argonaut was not a bleeding-edge design when it was first launched, but rather it was a collection of refined systems that had been developed and perfected for other classes. The centerpiece of this ship, like the Intrepid, is the Class-9 warp drive, though her overall top speed is more limited as the ship’s mass is greater and her systems have been tuned more for ease of maintenance than raw spring speed.

The ship’s hull is a compromise between Akira-class and Intrepid-class design philosophies, with the primary and secondary hulls blending seamlessly together into a long, sleek vessel, with two warp nacelles tucked close to the ship. This arrangement both improves maneuverability and reduces construction time by having fewer independent structural members compared to vessels with completely distinct engineering and command sections.

The ship’s computers use the same bioneural circuitry used aboard Intrepid-class starships, though more of this processing power has been allocated to tactical analysis and targeting systems rather than to exploratory systems.

The Argonaut-class starship is more heavily armed than most ships of her size, but not quite to the level that she would be classified as a heavy escort, like the more robust Manticore and Prometheus-class starships. The ship has two burst-fire torpedo launchers mounted in the saucer section, as well as two forward and four aft single-fire launchers at either end of the keel. Coupled with comprehensive coverage provided by Type-XII phaser arrays and her impressive sublight maneuverability, the Argonaut is an adept tactical platform on its own. In addition, it is fitted with a large hanger that runs along the spine of the ship with doors on the forward and aft ends of this section to allow for the deployment of fighters and runabouts, which further supplement the ship’s tactical abilities, and makes it especially useful as a picket in large fleet engagements. Between its fighters and its own weapons coverage, it is adept at screening larger ships and engaging in point defense duties.

The Argonaut is considered a light carrier and possesses a unique flight deck that runs along the spine of the ship which allows it to conduct landing and launch operations simultaneously. During exploratory missions, the Argonaut typically operates with a half-dozen Volga-class runabouts to conduct reconnaissance and survey missions. They are also useful for humanitarian purposes and can hold their own in tactical situations.

For defensive missions and during wartime, the Argonaut embarks a squadron of a dozen Valkyrie-class fighters to support its primary mission of screening larger vessels. For special missions, it can also carry Apsara-class bombers in lieu of fighters to add to the ship’s direct offensive capabilities.

In addition to the main hanger, the Argonaut also has a standard shuttle bay on the bow of the ship, which stocks a standard complement of four personnel shuttles.

Argonaut-class ships are comparable to other light cruisers designed in the 2360s and 2370s for their standards of accommodation. All crewmembers above the rank of Ensign have their own staterooms and all crewmembers below that rank share quarters with one other person. The ship has two large holodecks for parties of 8 or more, as well as a further half-dozen holosuites intended for smaller groups. The vessel also has a mess hall, crew lounge, and officers’ lounge, though given the ship’s more militarized design compared to the Intrepid, these spaces do not have the same sweeping exterior views as her sister class does.

Given the ship’s two distinct mission profiles, tactical and exploratory, crews vary wildly in composition based on the ship’s assignment, carrying more scientists and fewer pilots when sent on exploratory missions and the reverse when it is tasked with defensive ones. Given this, crew changes aboard Argonaut-class ships are common when the ship shifts between mission profiles, leading to a split between the ship’s core crew and the mission specialists, which adroit captains and first officers must work to reconcile through morale-boosting events.

Argonaut-class ships are generally considered a desirable posting by members of Starfleet who favor more adventurous duties than simply scanning planets, and conversely, their scientific members tend to be displeased with her generalist facilities.

Medical facilities on the Argonaut consist of two standard sickbay modules, one located near the center of the ship and the other close to the large hanger on the spine of the ship, which allows the ship greater flexibility to respond to humanitarian missions and improves crew survivability in combat situations. The vessel has holographic projectors in every compartment to allow for the ship’s EMH to treat crew anywhere.

At the beginning of the Dominion War, Intrepid-class ships were still a rare sight in the fleet, prized for their sensor suites, but generally considered too valuable to risk on the front lines. A more combat-oriented variant was ordered that would retain her scanning capabilities, but with more emphasis on offensive potential. As such, the brief called for increasing the projectile armament to include an additional two burst-fire torpedo launchers, phaser and shielding systems derived from the new Sovereign-class explorer, and the capability to launch and recover small craft during combat.

Given that Starfleet already had a number of light cruiser designs in service, this project was never given the resources it would have needed to get off of the ground before the end of the war, but continued steadily into the 2380s, given that the Alpha and Beta Quadrants were still an unstable place following the war. The design suffered from a number of setbacks, especially when it came to power management, but the class prototype was launched in 2382.

Though they had been meant for tactical function, the first ships in this class were immediately tasked with assisting in the Romulan evacuation effort, thanks to their complement of runabouts, though following the destruction of Utopia Planitia in 2385 and the destruction of Romulus in 2387, their priorities were shifted to border security along Romulan space.

Currently, the Argonaut is a relatively rare sight within the fleet, as Starfleet has preferred to order Intrepid and Elysion-class ships over the Argonaut, but there are several dozen in service and production is expected to continue alongside her cousins for the next decade at least.

Among the Intrepid derivatives, the Intrepid is an all-rounder, the Elysion is her slightly-smaller, slightly-smarter cousin for long-range missions, and the Argonaut is the punchier version which will stick closer to Federation space. You pick a ship of this class when you’re expecting to do exploration and occasionally run into trouble.

During combat situations, you could think of the Argonaut like a modern-day amphibious warfare ship with its complement of runabouts or fighters supplementing its own weapons, but it’s meant to either support larger ships in fleet engagements or to escort other small ships light freighters and science ships.

Argonaut captains have to decide well in advance what they need for a mission–you’d need to be at a starbase or rendezvous with a large explorer to swap out small craft complements.

Where an Elysion or Intrepid might choose to run from a fight, an Argonaut stands a better chance of being to punch its way through difficult situations.