The Battle of Trafalgar from the early 18th century has gone down as one of the most famous naval battles in Earth’s history.  The story of Admiral Lord Nelson’s victory over the combined French and Spanish fleets, his proclamation that ‘England expects every man to do his duty’ and his death shortly before the battle ended has endured for centuries.  Fitting then, that a Starship named for that battle should be one originally designed as a response to Starfleet’s losses to the Borg at the  Battle of Wolf 359 and whose reputation in combat would be forged in the fires of the Dominion War.

Launched in 2374 from the Utopia Planitia Fleet Yards, with the Dominion War raging, the USS Trafalgar was pressed into service with 15% of her internal spaces still unfinished; mostly science labs and other non-essential areas.  The Trafalgar was quickly flight tested and underwent an abbreviated shakedown that focused on her tactical and defensive systems before being assigned to the Fourth Fleet.  Acquitting herself well in a number of minor skirmishes during her first few months in service, the first real test for the Trafalgar came when she was involved in the First Battle of Chin’toka.   Though she sustained major damage from the orbital platforms, the Trafalgar came through the battle in one piece and following a few weeks of repairs, returned to active duty.

The Trafalgar continued to see action during the remainder of the Dominion War, remaining with the Fourth Fleet until the conflict came to an end.  She would see her fair share of combat missions during this time but was lucky enough not to be at the Second Battle of Chin’toka, when the Dominion’s newest allies, the Breen, wiped out the Federation Alliance fleet with their energy dampening weapon.  This caused the Trafalgar, and every other Federation ship, to be sidelined until a defence could be found for this weapon.  Once that happened and the necessary modifications were made to the Akira-class ship, she was pressed back into service.  The Trafalgar was part of the Federation Alliance fleet that took part in the Battle of Cardassia.  Following the war, the Trafalgar returned to Utopia Planitia Fleet Yards where those internal spaces were finished and she was given a formal commissioning ceremony.

While the first few years of her service had allowed the Trafalgar to prove herself in combat, the years that followed saw the Akira-class starship proving herself a capable multi-mission platform; border patrol, humanitarian missions, disaster relief, anti-piracy operations, scientific study.   The Trafalgar proved herself capable of handling anything that Starfleet sent her way and her reputation only continued to grow.  When Admiral Picard began forming his fleet to evacuate the planets in the radius of the impending Romulan supernova, the Trafalgar was one of the ships he requested.  She would have several roles during this time including carrying Romulan refugees and providing security, driving away pirate ships on more than one occasion.  Starfleet’s involvement in evacuating the Romulans came to an end with the synth attack on Mars and the destruction to Utopia Planitia.

Now under the command of Commander Thomas Forrester, the Trafalgar is currently assigned to the Headquarters Group of Task Force 86, ready to take on whatever assignment that Task Force Command throw at them. 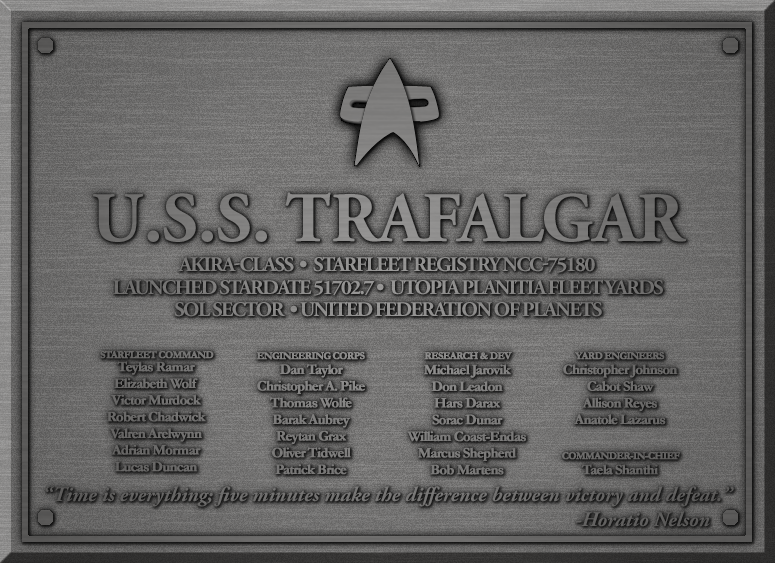