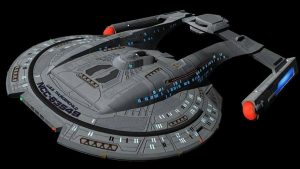 The USS Tomcat is assigned to Starfleet’s 4th Fleet, designated Bravo Fleet. Operating out of Task Force 93, the Tomcat serves as the mobile command platform for all rapid response efforts near the Klingon-Federation border. The Tomcat and its crew are war-seasoned veterans of the Battle of Sector 001 and the Dominion War, having featured prominently during several battles including, but not limited to, Operation Return and the Battle of Cardassia.

Stationed on board is SPECTRE’s Bravo Team, a special operations squad of elite intelligence operatives serving at the behest of Starfleet Intelligence’s controversial special activities division. Bravo Team is comprised of six, highly-trained Starfleet Officers with advanced specializations that uniquely qualify them to undertake dynamic missions to advance Starfleet and Federation interests throughout the Beta Quadrant.

Assigned to Bravo Team is the USS Penobscot, a Danube-class runabout whose interchangeable modules can be swapped out and adapted to fulfill mission-specific objectives. Based on its configuration, the Penobscot can operate independently for up to four weeks before needing resupply by the Tomcat, and is equipped with all of the resources, supplies, and materials to sustain the crew and advance their mission objectives.

Read more about our adventures by CLICKING HERE!