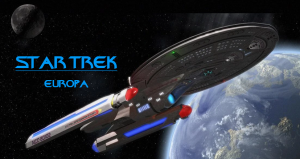 Following the destruction of Utopia Planitia and the burning of Mars in 2385, Starfleet’s brief postbellum return to long-distance exploratory missions was put on hold. Instead of reaching outwards to strange new worlds, the Federation pulled in on itself to safeguard its own enormous borders and so Starfleet was put on a largely defensive posture. This all changed in 2399, however, when the Fourth Fleet was given the mandate to spearhead a renewed focus on Starfleet’s core purpose: exploration.

The Europa is one of the original twelve Luna-class vessels ordered by Starfleet following the Dominion War. This class was designed to be a 24th century equivalent to the venerated Constitution-class, a heavy cruiser capable of truly independent years-long missions. She was first commissioned in 2380 and had an extremely successful five-year mission in the Gamma Quadrant, but then was reassigned to diplomatic duties in the Alpha and Beta Quadrants along with the bulk of the exploratory fleet in the late 2380s.

Now, in 2399 under a new captain, Gregory Alein, the Europa is ready to set off on her next five-year mission into the unknown! 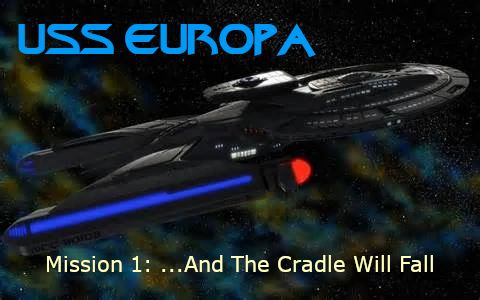 ...And The Cradle Will Fall
started September 11, 2021
Setting out from Starbase, the Europa has been tasked with assisting the Cardassian Empire in finding the Eldara. An aging transport vessel, the Eldara was last seen near the Badlands. With the vessel severely off course and no communication, the Europa heads blindly to the Badlands in search of their target. Finding the Eldara seriously damaged by the plasma storms and unable to maintain life support, Captain Alein orders the crew and passengers of the Eldara beamed over.

This service is managed by the Operations Office. If you have questions about this service, please contact an office staff member.