The USS Mercy comes from a long line of hospital ships.  The first ship was the United States Navy Ship Mercy which served faithfully.  The USS Mercy is named after the Old Earth ship and has adapted her motto, “Steaming to Assist,” as a way to honor the original ship and her crew that sought to help and heal those across the globe.

The USS Mercy is an Olympic-class starship primarily set up for a medical and science diplomatic operation.  The ship is deployed in situations ranging from search and rescue, medical emergencies, and scientific missions and rarely acts as a diplomatic envoy to colonies, ships, and stations and only when other ships cannot assist.  Onboard the command team doubles as the diplomatic team when the need arises.  There is a dedicated medical team and science team onboard.  All officers and crew are trained and endorsed in combat operations if a situation devolves or requires additional support.

The USS Mercy recently had a refit in 2400, and as such, her interior designs were remodeled.  See below for links to detailed photos.

The USS Mercy is currently operating as a Science and Medical ship.  Her current crew amounts :
150 crew, 500 hospital crew (can be expanded to 750 in emergency), 150 science 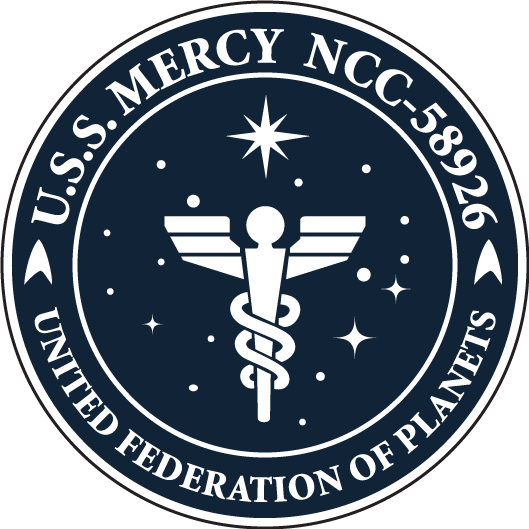 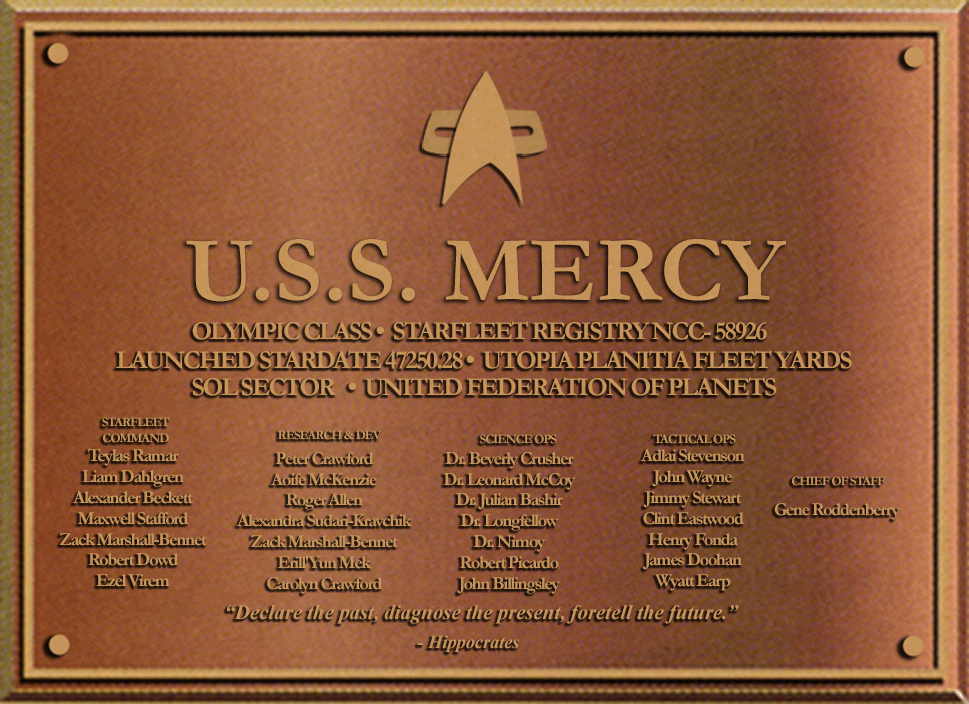 Wind ripped across the Isle of Skye from the sea.  To the east the blue line of the mainland rose out of the water. On a ridge commanding the heights of the village stood the remains of Castle Cairnmoore, a 14th Century fortification that had been abandoned since the “45” and destruction [...]

Filling in the Details

“Lieutenant Iziraa.”“Commander Sorek.  What can I do for you, sir?”“I've been checking the teams to ensure everyone is safe.  What is your status here?”Izi thought about what she should say.  She understood what the commander meant, but her knee-jerk reaction was to say, [...]

A communications officer turned to Halsey on the bridge, “Captain – Lieutenant Iziraa reported a colonist for murder.  She had him transported to the brig, and her report has just come in.” Leopold turned in his chair, “A colonist for murder?”  He stood and accepted a PADD from [...]

With a phaser, a tricorder, handcuffs, a flashlight, and a pouch on her belt filled with energy bars, Izi and the medical team she was escorting, a doctor, a nurse, and two orderlies, beamed down from the Mercy, appearing in one of the colony business districts. The shock of the devastation made [...]