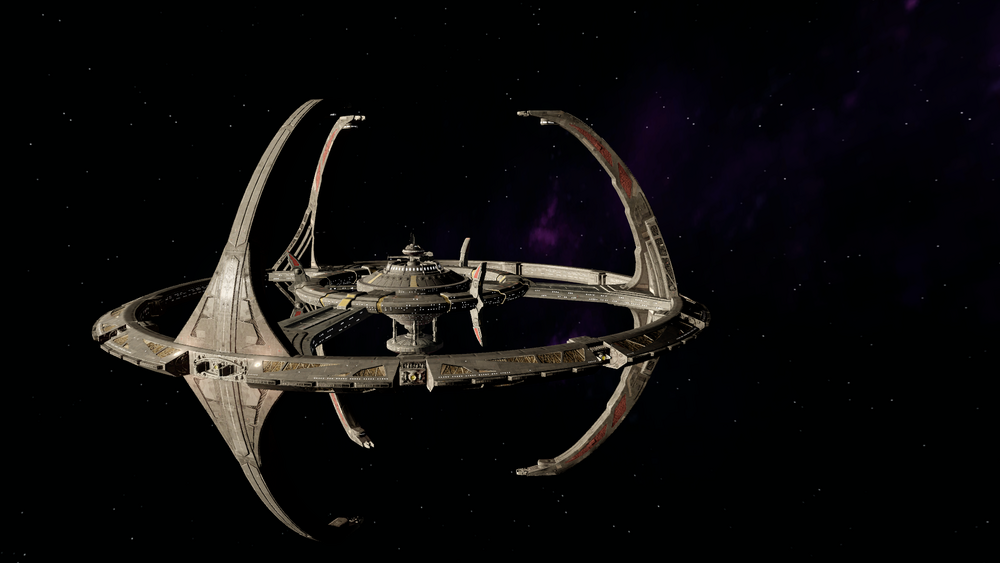 Empok Nor was a Cardassian space station located in the Trivas system. Structurally, the station was identical to other Nor-class stations such as Terok Nor (later redesignated as Deep Space 9 by the Federation). The station was abandoned in 2372, and while it was visited several times during the Dominion War period by both Federation and Dominion forces, the station did not return to operational status during this period.

Following the Dominion War, the Trivas system changed hands during negotiations with the Federation over post war boundaries as a concession to the Federation for damages during the war prior to the Cardassian Liberation Front’s rebellion of Dominion rule. During the period when the Trivas system was under Federation control (2375-2386), Empok Nor was largely left untouched, minus a few parts being removed to maintain Deep Space 9. The year following the Utopia Planetia attack, the Cardassians renegotiated the terms of the territorial concessions on the grounds that such concessions were made on the condition that post war aid would not expire until 2390. Reluctantly, the Federation agreed to return the Trivas system, as well as several other border worlds, in recompense for backing out of their aid agreement.

Despite the Trivas system returning to Cardassian control, Empok Nor continued to float in its orbit around the Trivas star undisturbed, almost forgotten, as the internal political structure of the Cardassian Union continued to decline into stagnation and schism. It wasn’t until the resurgence of the Obsidian Order, more specifically when the Order had infiltrated the higher echelons of Cardassian Central Command in 2395, that Empok Nor found itself being repurposed, albeit very slowly.

The damage done to the station, not only from lengthy abandonment but the many salvage operations that took place while the station was in Federation hands, made it necessary for the station to undergo something of an overhaul under the watchful eye of the Obsidian Order. Though no real ‘purpose’ was assigned to the station, it was in a strategic enough location that should the need arise for the Order, and vicariously the Detapa Council, to use the installation, it would be a viable platform from which the Order could launch any number of operations. The reconstruction took nearly three years to complete, bringing the once derelict station back to life. By the tail end of 2398, the facility was considered to be operational, though only a handful of people on the Council or in the Order knew of the station’s revival.

In the middle of 2399, the Chairman of the Detapa Council, Ila Rekal, took an unusual interest in the station and how it could best be utilized for the betterment of the Cardassian people. The Chairman used her connections within the Order, and her rather persuasive talents as a politician, to convince the Council to approve of a plan that she believed would bring Cardassia back to the galactic stage, and pull in a large amount of economic and political support from their cautious Federation neighbors. The move was in no way benevolent, but the idea was sold as such to the Federation Council, though the methods through which the Chairman managed to get the proposal into Federation hands was never revealed to the general public. Secrecy aside, the station was slated to become a ‘Grand Experiment’ in cooperation between the ruthlessly xenophobic Cardassian Union and the highly skeptical Federation.

Legate Sela Aren was currently listening to Glinn Talmet as he outlined the request that had been made by Captain Bastin for information regarding the behavior of his staff during his absence. None of the information was classified in any manner, which had prompted the Glinn to release it without [...]

Glinn Talmet stared through the force field that separated him from the hulking Nausicaan sitting on the slab that served as a bench and bed in the holding cell just adjacent to the Cardassian’s office. The Security Chief’s staff had been diligent throughout the night, managing to extract a [...]

Legate Sela Aren leaned back in her chair and rolled her stiffened shoulders after finally reaching a point in her backlog that could wait until the following day. Most of the work she’d had to tackle was administrative in nature and was more of an exercise in bureaucracy than anything that she [...]

Glinn Talmet and Lieutenant Nieru entered the single operating bar on Empok Nor, both of them still carrying their rifles. The Glinn had stated rather flatly that he had no desire to return to his office and the Saurian being armed was no great risk given the circumstances, which led the pair to [...]