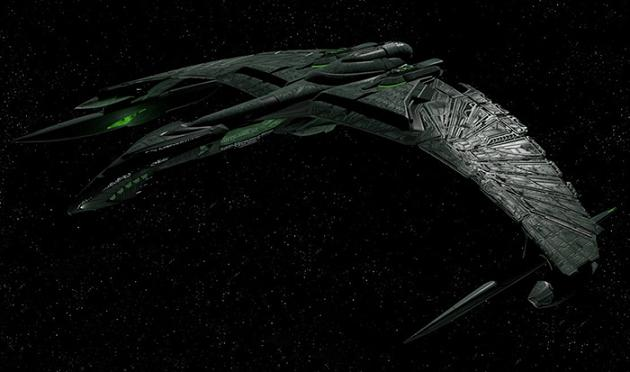 Originally designed in 2368, the Valdore was labeled as ‘unneeded’ by the Romulan Military. At the time, Romulan thinking was that the D’deridex Class of warbird was unmatched by anything in the Starfleet or Klingon fleets. With the production of the Preax class cruiser, a much smaller ship, the Romulans felt that even if an enemy had many smaller, more maneuverable ships and were able to ‘run circles around’ the D’deridex, the Preax would be an overwhelming counter. The prototype ship sat in storage at the Romulus Imperial Fleet Yard until 2376.

With the Romulan fleet taking moderate losses to the Dominion, mainly because even the largest Dominion ships could outmaneuver the D’deridex and the Preax was no match for these ships, the Romulan Senate ordered the Valdore class into production. Taking advantage of newer technologies, as well as advice from their Federation and Klingon ‘allies’, the Valdore prototype was rebuilt from the keel up.

Designed to be a strike cruiser, the Valdore’s primary beam/pulse weapons are actually more powerful then the larger D’deridex’s (3 Type-20, compared to 1 Type-21 of the D’deridex). However, this is balanced out with fewer torpedo launchers and secondary beam/pulse weapons. The Valdore also has better maneuverability then the D’deridex and is somewhat faster. However, the biggest drawback to the class is it’s shielding. Romulan beliefs are that a strike cruiser should be a heavily armed, fast ship. Able to rush in, attack a target, and get out. Not stand nose to nose with larger ships, or even with ships it’s own size unless the enemy’s tactical systems are inferior. The Valdore’s mission also includes advanced scouting, a role it’s taking over from the older Romulan scout vessels, due to it’s greater speed.

Six of the new ships were ready by mid-2376 and rushed to the front lines. Commanding the small task force was a man soon to be very well known in the Star Empire and the Federation, Shinzon of Remus. The new ‘Valdore Strike Force’ deployed on its first mission in November of 2376, attacking a Breen shipyard. The base was destroyed in less than twenty minutes. Other engagements followed, against ever-increasingly tougher targets. Shinzon proved to be a tactical master, winning every engagement he fought in and catapulting the Valdore’s status as a great ship. By the end of the war, there were nearly as many Valdore type warbirds on the front line as D’deridex type Warbirds.

Today, there are almost one hundred Valdore type warbirds in the Romulan Military. Their latest battle came against the man that helped them create a name of their own, Shinzon. However, Shinzon was able to use his knowledge of the class to destroy one and heavily damage the other (the IRV Valdore itself) when the two ships aided the USS Enterprise-E in it’s attempted to stop Shinzon from reaching Earth in his attempt to destroy all life on the planet. After the encounter, the Valdore Class’ current in service, and future ones, were refitted with higher intensity power cores and more advanced shielding systems as well as more advanced science capabilities. Now the Valdore’s are more muti-functioning vessels like the D’deridex’s, with more advanced weapons and similar shields. The Valdore’s will help pave the way for the future in Romulan ship design.