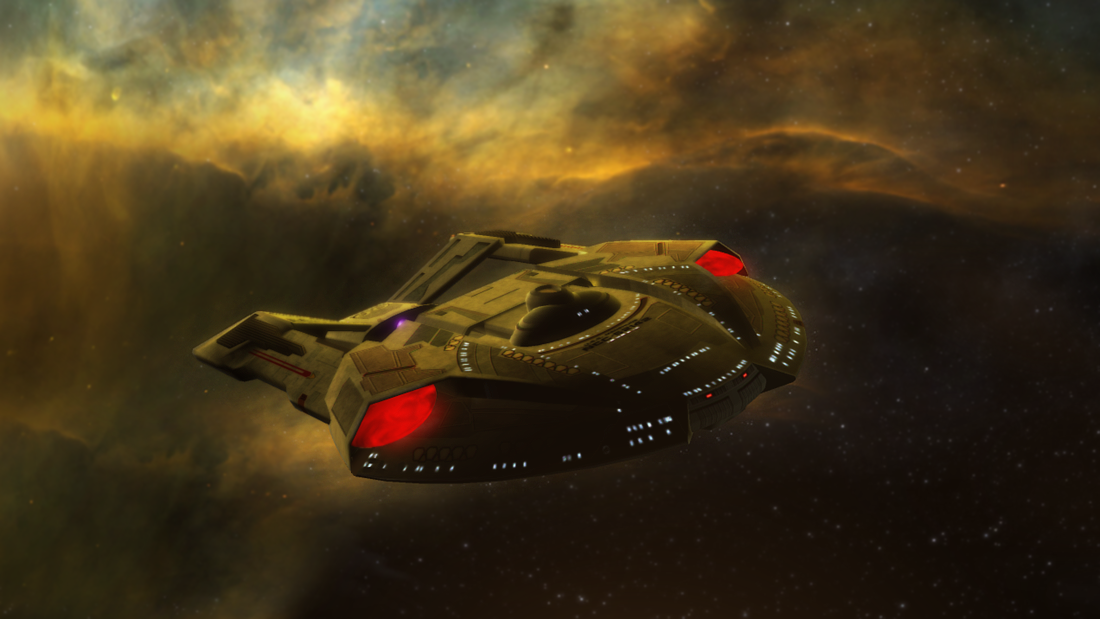 By the mid-2350s, Starfleet Command began to focus on developing a replacement for the venerable Miranda-class space frame which had successfully served the Federation in a broad variety of roles since the 2260s. The Steamrunner-class proposal was eventually confirmed based on the design’s ability to undertake non-specialised diplomatic, scientific and exploration mission profiles from a relatively small, self-sufficient, and efficiently resourced and operated platform.

Whilst lacking the depth and breadth of the science facilities found on the outgoing Oberth-class and incoming Nova-class survey vessels, Steamrunner was intended from the outset to be able to successfully complete general exploration and scientific missions as part of its multi-role brief. The class includes four configurable science laboratories and a dedicated astrometrics laboratory on Deck 4. These laboratories are serviced by a full suite of scientific sensors, supplemented by data inputs from enhanced navigational and long-range sensor arrays located in both the primary hull and aft-mounted deflector pod.

In line with the original design brief of Steamrunner being able to fulfill multi-role mission profiles, limited diplomatic facilities are provided on Deck 3 which include a number of well-appointed staterooms, two small conference rooms and a private dining / reception suite.

The Steamrunner-class spaceframe has a unique design consisting of a broad primary hull which contains the majority of the vessel’s systems and a separate navigational deflector pod situated aft of the primary hull and connected via the port and starboard warp nacelles. The nacelles themselves are angled to both minimise the tactical profile of the vessel during combat and to benefit from the significantly improved engine efficiencies experienced by this configuration during extended warp 8+ flight. The separate navigational deflector pod is accessed by a heavily shielded single-width companionway which runs the length of both nacelle cowlings.

The class-7 warp drive is maintained from Main Engineering on Deck 6 with direct connections to both warp nacelles and the paired impulse engines positioned on the trailing edge of the primary hull. Deuterium is stored in twin tanks which occupy space between Decks 6 and 7, whilst antimatter is stored under magnetic locks on the lower-most Deck 8 to allow forcible ejection away from the vessel in case of catastrophic failure of containment. Likewise, the entire matter/antimatter reaction assembly has the ability to be ejected from the ventral axis in case of a warp core breach.

The Steamrunner-class light cruiser is rated to Warp 6 for standard cruising, with a maximum velocity of Warp 9. Emergency velocity of Warp 9.5 is achievable for approximately 12 hours, with associated engineering repairs required at the earliest opportunity.

Whilst not expected to perform as an out-and-out combat vessel, the multi-role nature of Steamrunner’s mission brief requires it to be able to defend itself and any accompanied vessels. Threat simulations conducted during the class development stages indicated that due to the Steamrunner’s minimal profile, three Type-IX dorsal phaser arrays mounted on the primary hull, supplemented by a single forward mounted photon torpedo launcher would be required. From the experience gathered during early operations, this load-out was increased and the existing arrays upgraded.

The vessel’s low profile also allowed designers to maximise the protection of several key systems. The main bridge module nestles in the centre of the broad primary hull and is afforded significant protection by the raised aft superstructure of the saucer section and the large Bussard collector cowlings to port and starboard. Similarly, the main navigational deflector mounted at the stern of the vessel is screened from attack by the angled warp nacelles

Two separate shuttle bays are located at the trailing edge of the primary hull, across Decks 6 and 7. Each shuttlebay is equipped with a single Type-9 shuttlecraft, two Type-18 shuttlepods and one workbee, with both shuttlebays supported by a shared repair and maintenance facility.

With a standard crew complement of 120, the Steamrunner-class vessel is equipped with substantial recreational and communal spaces including a large mess hall, gymnasium, two holodecks, an aft observation lounge and an expansive forward recreation & observation lounge which is large enough to accommodate the entire crew for all-crew briefings or celebrations.

Quarters assigned to the Commanding and Executive Officers are located on Deck 3 due to the proximity to the bridge, whilst department heads and those officers of lieutenant-grade and above enjoy the privacy of individual quarters across Decks 4 and 5. Junior officers occupy shared quarters with a colleague, as do all enlisted crewmembers. The quarters assigned to engineering officers and crew are located on Deck 6 to provide convenient access to main engineering and its support functions.

All crew members have access to a well-equipped medical suite operated under the aegis of the Chief Medical Officer and the Ship’s Counselor.

By the mid-2350s, the Miranda-class multi-role light cruiser which had become so prolific across all fleets was rapidly starting to fall behind in terms of capability when compared to contemporary Starfleet designs, as well as those of known threat and potential-threat forces across the Alpha and Beta Quadrants. Development of the Steamrunner-class replacement was first begun in late 2358, with the hull NX-52135 laid-down at Utopia Planitia fleet yards in 2362 to provide the basis for a new multi-role platform intended to fulfill the general diplomatic, scientific and exploration mission profiles previously conducted by the Miranda-class.

Spaceframe trials commenced in 2367 but development was halted that year following the loss of almost all Federation vessels involved in Starfleet’s engagement with the Borg at Wolf 359. All of the ships currently in development at that time – Steamrunner, Akira, Norway and Saber – were reviewed and updated with a view to hardening the designs and creating toughened, more protective hulls to improve the survival of this new generation of ships in combat. With these new designs in place, development once again continued, with the NX-52135 shakedown cruise completed during 2370. In early 2371 this lead vessel was commissioned as USS Steamrunner NCC-52135 and production of the class commenced.

During the earliest skirmishes with Dominion vessels; ahead of the Dominion War proper; it became evident that three dorsal mounted phaser arrays were not sufficient. Existing vessels were hurriedly retro-fitted with an additional two Type-X phaser arrays. The existing arrays were upgraded to Type-X and a second forward torpedo launcher was installed directly above the first. These untried and untested modifications were deployed ahead of schedule when USS Appalachia and USS Hiroshima were hurriedly dispatched from Utopia Planitia in 2373 to take part in the Battle of Sector 001. Following the successful performance of these two Steamrunner-class ships, the modifications were included in all future construction plans.

Although the objective of the Steamrunner design being the successor to the Miranda-class light cruiser was eventually superseded by the larger Reliant-class light cruiser which entered service in 2385, Steamrunners still see service wherever Starfleet operates due to their smaller size and thus reduced construction costs and operating requirements.