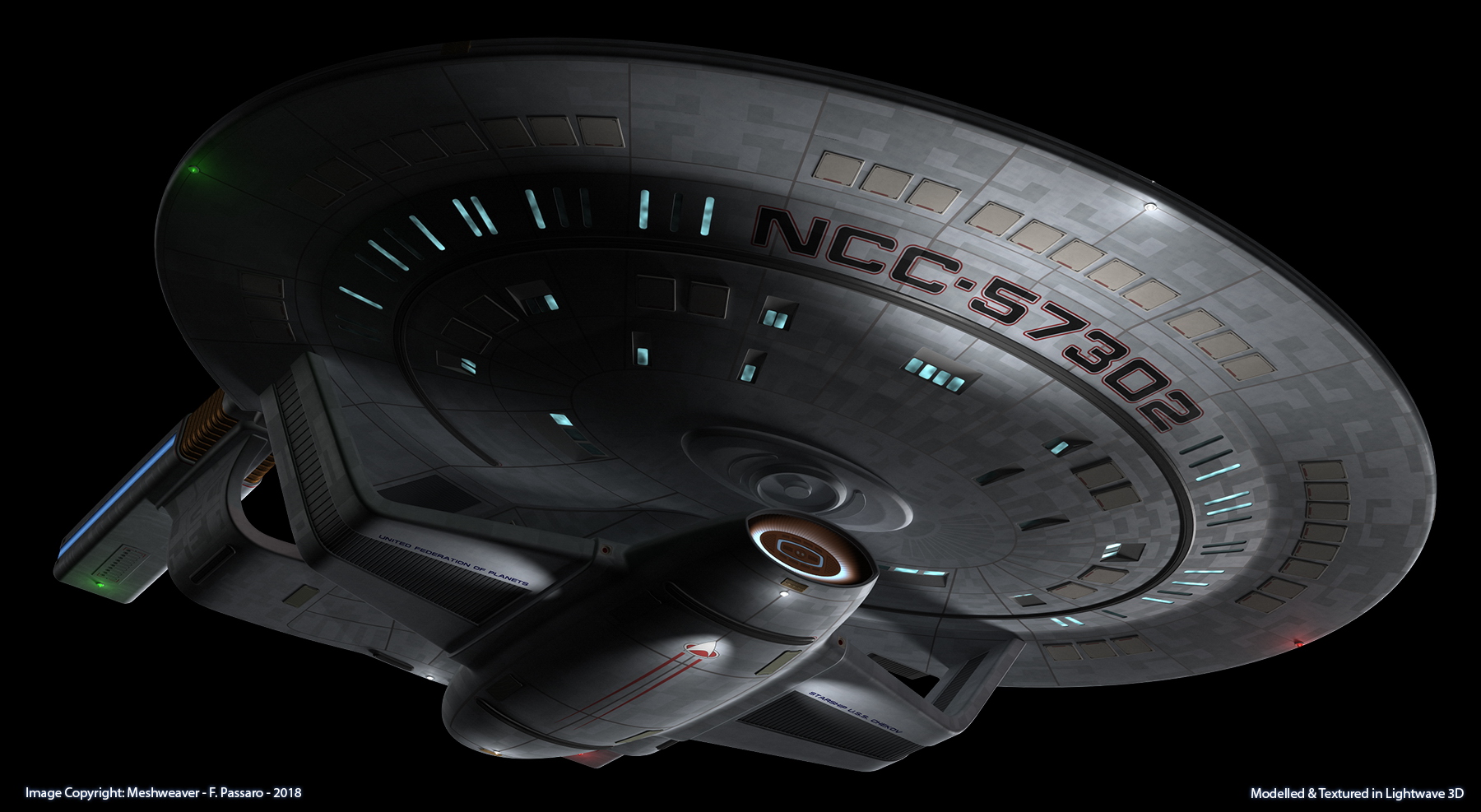 The Springfield-class is a medium-sized science vessel designed in the 2340s and produced throughout the 24th century. It is substantially better as a science vessel than the converted Miranda-class ships it was built to replace, and has remained a popular vessel among the scientific community, but it has never been produced in large numbers. They are a useful, modern vessel largely found within Federation space.

The Springfield-class is a generalist science ship that is adept at both planetary and stellar surveys. It is larger than the newer Nova-class ship, and so is able to house specialized labs for nearly every scientific sub-discipline as well as eight mission-configurable labs. Additional mission-configurable space is found in a large mission module mounted to the aft dorsal section of the ship. The engineering section contains a deflector substantially more powerful than is necessary for a ship of this size, which increases the ship’s long-range sensor power. Flanking the engineering hull are two forward and two aft launcher tubes, which can either launch photon torpedoes or probes, and the Springfield-class has the facilities aboard to construct new probes for novel scientific situations. Given her increased size compared to other science vessels, this class is adept at hosting scientific teams beyond her standard crew complement while continuing her normal duties. At any given time, a Springfield-class ship will be conducting several dozen independent scientific missions.

While primarily a scientific platform, the Springfield-class has a limited number of guest quarters and a single conference facility, giving it some ability to host dignitaries. This class is capable of handling first contact situations with minor powers, as it is well-armed enough to defend itself, but it is also a non-threatening vessel. Generally, however, it will identify potential first contact situations and signal Starfleet to send a vessel more suited to this purpose.

The Springfield-class shares a primary hull design with the Challenger and New Orleans-class starships, which is a smaller version of the one used aboard their larger Nebula and Galaxy-class cousins. Unlike these newer vessels, however, the Springfield has compact,

boxy warp nacelles. These older-style engines keep the Springfield’s top speed to a relatively modest Warp 8, with a standard cruising speed of warp 6. The warp core is mounted horizontally in the underslung engineering hull and is able to be ejected through the stern if necessary. This creates a more complicated power distribution system for the Springfield than other classes of its era, with warp plasma being routed through pylons up into the primary hull and then out through a second set of pylons into the warp coils. The ship has two small impulse engines on the aft end of the primary hull, which give it modest sunlight speeds.

A unique feature of this vessel is a replaceable mission pod located between the two warp nacelles. This shield-shaped pod contains two decks worth of mission space in the forward two-thirds, while the final third is a cowling that locks in above the ship’s shuttle bay. Unlike the Nebula-class, the Springfield-class pods are uniform to maintain warp field geometry and are reconfigured internally. They can easily be fabricated and reconfigured at starbases, but often they are used to contain additional sensors or laboratory space. During the Dominion War, they were often equipped with medical facilities, serving as makeshift hospital vessels.

Like other ships of her era, the Springfield carries a captain’s yacht. The small shuttle bay on the stern of the ship contains a small complement of personnel shuttles.

The Springfield-class has similar armaments to the other ships of her era, with comprehensive coverage provided by several small Type-X phaser arrays. Originally, the ship was built with Type-IX arrays, but these were upgraded in the 2370s. In addition, there are two single fire torpedo launchers fore and aft in the pylons holding the engineering hull. These are primarily intended for probe launch and retrieval, so they lack the fire rate of dedicated tactical vessels. However, they are also easy to maintain.

The Springfield-class has much better shielding than the Miranda-class and Oberth-class science vessels that it supplemented but because of all of the scientific equipment she carries, she is often considered too valuable to be used on tactical assignments. She is, however, suited to carrying out in research in areas that are not completely secure, given that she’s not entirely defenseless.

Life aboard Springfield-class ships is comfortable, as they have all of the conveniences of other modern 24th century starships. With holodecks, holosuites, an arboretum, and several gymnasia, crew needs are seen to easily by this ship, though few of them have been refitted with shipwide holographic projectors. These ships are a popular choice for science officers, as they typically do not run into trouble on their exploratory missions. Their captains are almost always former science officers themselves.

Compared to other ships of her size, the Springfield has a relatively high crew count at 200, which accounts for all of the additional scientific personnel she carries, but due to not spending unnecessary space on extra armaments or guest quarters, accommodation standards remain similar to the Intrepid-class.

With a greater endurance than the Nova-class, these ships’ crews often develop a strong rapport, on charting missions of up to three years within Federation space. Rivalries develop between different scientific problems and the atmosphere is like a prestigious scientific institute more than it is a military vessel.

The Springfield-class was designed in the 2340s as the first part of a fleet modernization program that would eventually lead to the Galaxy and Nebula-class ships in the 2360s. This class was the first off of the assembly lines and was intended to be a purpose-built science ship at the same scale as the Miranda-class, to supplement the hodge-podge of converted science vessels in Starfleet service. The design was not particularly revolutionary, but it did introduce the elliptical saucer design that would be a hallmark of Starfleet design for the next two decades.

The Springfield was developed before the new warp coil design introduced on the Challenger and instead retains a more modest engine system, but otherwise, it was a highly capable design for its time. So much so, that Starfleet never produced them in huge numbers, placing only modest orders. While they were significantly more capable than Miranda-class ships for scientific missions, they were also that more costly to build and maintain, while also being less versatile for other types of missions.

The Chekov and Dobrovolsky were both destroyed at the Battle of Wolf 359, and though this was not an indicator of this class’s specific weakness, production on this class was terminated after a run of about fifteen years with 150 of them in service, in favor of the new Norway-class which was a more combat-hardened design for a medium-sized science ship and the Nova-class as a planetary surveyor. These ships were refit with Type-X phaser arrays as part of other improvements to the fleet’s tactical abilities in the 2370s.

Several Springfield-class ships were destroyed during the Dominion War, but they were generally kept off of the front lines. Many of them were used for medical and transport duties, a role which continued into the 2380s. They remain a popular but relatively rare science vessel, one that saw its production slowed because it was simply not the right balance of resource expenditure and versatility for the Starfleet of its time.