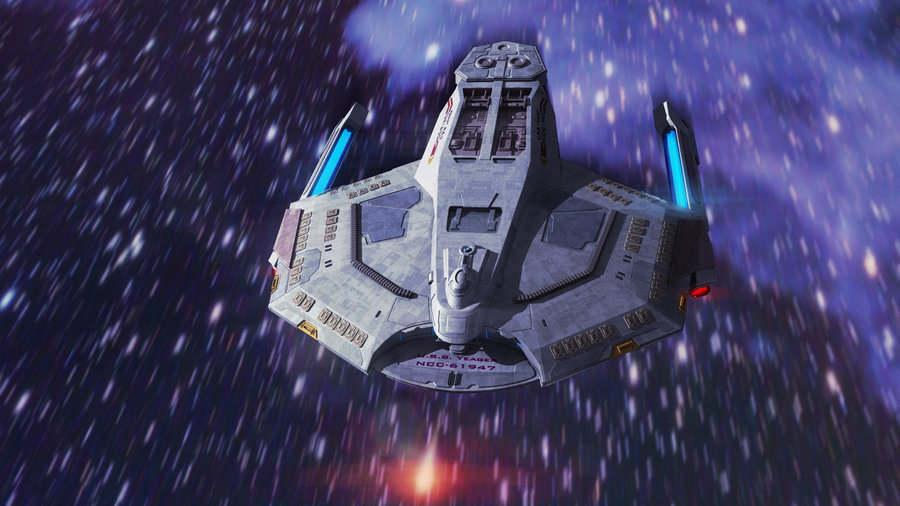 Produced in large numbers, the Saber-class is one of the simplest designs in current Starfleet service. It was designed to serve as both a scout and as a frigate, following the disastrous battle of Wolf 359, and served with distinction in the Dominion War as a modern, agile combatant that favors speed, maneuverability, and reliability over brute force. These ships have been in production since 2368 and remain a staple of the fleet going into the 25th Century. 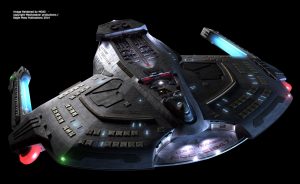 The upper forward quarter of the Saber-class featuring the dorsal phaser arrays, bridge, and shuttle bays.

Saber-class ships are not designed for independent exploratory missions but are often used to run initial surveys of new star systems before the front-line explorers or science ships are sent in, as they are adept at threat recognition and their small size allows them to escape from potential dangers relatively easily. Unlike the smaller Defiant-class, the Saber does have four standard science labs aboard, but unlike larger starships, her ability to conduct scientific research independent of her primary mission is very limited.

Because of her armored hull and compact shape, one area of scientific study that the Saber-class does excel in is the charting of nebulae and stellar nurseries, as well as exploration within the dense atmospheres of gas giants, as the ship’s structure is very resilient due to its simple structure and integrated reinforcements.

Saber-class starships’ diplomatic ability is extremely limited. At most, they serve as couriers transporting diplomats to their final destinations within Federation space, but they’re not particularly spacious or luxurious, so they are not preferred by the Federation Diplomatic Corps either for foreign dignitaries or for their own ambassadors.

The Saber-class was a radical departure from Federation starship design trends of the previous hundred years. While monohull designs like the Miranda had been in service for a long time, the Saber was the first Starfleet design to completely integrate a primary and secondary hull as well as the nacelles into a single structure, unifying support members across the entire body of the vessel to both simplify construction and give added strength to the design. To have the nacelles so close to the rest of the ship, thick layers of reinforcement around the warp coils were necessary to prevent radiation levels from becoming an issue, but the design performed favorably in maneuverability trials.

The ship’s designers were given a contradictory design brief: match the Galaxy-class in terms of speed so that this new frigate could keep up with the capital ship that she was meant to escort, while also minimizing maintenance needs and prioritizing survivability. The solution to this problem was to take the engine systems from the New Orleans-class and retain their size and configuration, but to put them in a starship with a much smaller mass, thus avoiding having to design a completely new, experimental engine. Reliability was further increased by using power conduits and couplings taken from the Galaxy-class design, which were so robust that the Saber would never even be theoretically capable of producing enough power to damage them.

Impulse power is provided by two over-sized engines on either side of the primary hull, giving the ship impressive speed and maneuverability it needs to perform as a picket in fleet engagements.

Other systems are comparatively simple; the deflector design was borrowed from the New Orleans and there is only a single computer core aboard. The ship does have a relatively large cargo hold in the aft section which increases its utility outside of combat situations, and there are two shuttle bays on the bow, though they are only capable of supporting smaller shuttles.

The Saber-class is an excellent tactical platform for supporting larger starships in fleet engagement and for handling smaller raiders on its own. These ships weren’t intended to be warships per se but defense is the area in which they shine. The compact hull shape makes it more difficult for enemy vessels to get a lock on her, and thanks to a layer of ablative armor, hits are distributed across the entire surface of the vessel to minimize damage. Unlike earlier ships, the Saber has a much smaller number of windows, which further allows for a reinforced space frame.

Shield systems were borrowed from the New Orleans and are substantially more effective on this smaller vessel, providing shield power far beyond the Miranda-class, which was evident by the Saber’s improved survivability compared to the Miranda during the Dominion War and Battle of Sector 001.

The Saber-class has three Type-X arrays on the forward quarter of the ship, two on the dorsal side and one on the ventral side, along with a single Type-X bank that fires directly forward, which was developed for this class and for the Norway-class. Fore and aft torpedo coverage is provided by one launcher between the two shuttle bays and another in the stern. The lack of aft phaser coverage was considered to be an acceptable trade-off for greater maneuverability, as this ship can easily bring its forward weapons to bear against most targets. 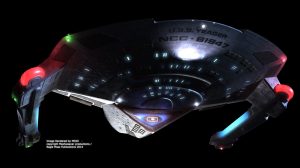 The lower forward quarter of a Saber-class ship, featuring the recreation deck and main deflector.

Saber-class starships are compact but still have a relatively high standard of living, with crew quarters comparable to other vessels of their age, unlike the spartan bunks found aboard the Defiant-class. All crewmembers other than the senior staff can expect to share suites, though. The Saber-class lacks full holodecks, but has two smaller holosuites. In addition, there is a relatively large recreation deck on deck eight, which is upside down relative to the rest of the ship–a unique design choice to allow for the room to take advantage of a flat portion of the ship’s underbelly with windows looking out into space. This room can only be accessed through a special turbolift junction which flips the cars over, and it has games, a lounge area, and impressive views of the stars.

The Saber has a standard sickbay module, as well as a gym and counseling facility to provide for crew wellbeing, but these ships are more dependent than most on starbases for shore leave. It’s rare for these ships to spend more than a few months outside of their home base, due not only to the limited rank of the ship itself but also because of their limited crew support facilities.

The Battle of Wolf 359 in 2367 led to a radical redesign program for the fleet’s construction projects. Four starship projects, the Akira, Norway, Steamrunner, and Saber-class, which were slated to come into service later in the century were pushed up and their designs were made more suitable for combat, with an immediate halt to production of the Challenger, Springfield, and Cheyenne classes. The Challenger did relatively well in its courier and scout roles, but its combat utility was severely limited, with few options available for a redesign that could remedy this. While construction of the Challenger-class was expected to continue until at least 2375, the Saber replaced most of its orders as a new scout, while the diplomatic functions it performed were shifted to the new Norway-class light cruiser. 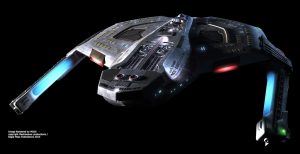 The aft quarter of the Saber-class featuring the large impulse engines which give her tremendous speed and maneuverability.

The Saber-class had been in development since the early 2360s as a conventional frigate design, but nearly the entirety of the work was scrapped to produce a smaller vessel with a hull profile that would make it difficult to hit in combat and resilient to attacks if it did get hit. The entire project was completed astonishingly quickly using off-the-shelf components and a radically simplified design profile, going from design study to prototype in only three years, with the USS Saber entering service in 2370.

While the design was not particularly capable, it met the design brief for a combat-capable starship that could be mass-produced (it took only three months to construct a Saber-class ship, with minimal shipyard berthing requirements) and which was capable of handling its own on border patrol missions, while also serving as a high-speed picket in fleet engagements.

The Saber performed much better than old-style starships such as the Miranda in the Dominion and Borg conflicts, though they did suffer losses. Given their small crew sizes and short construction times, though, they became the largest single fleet in Starfleet by 2385 and remain in production.