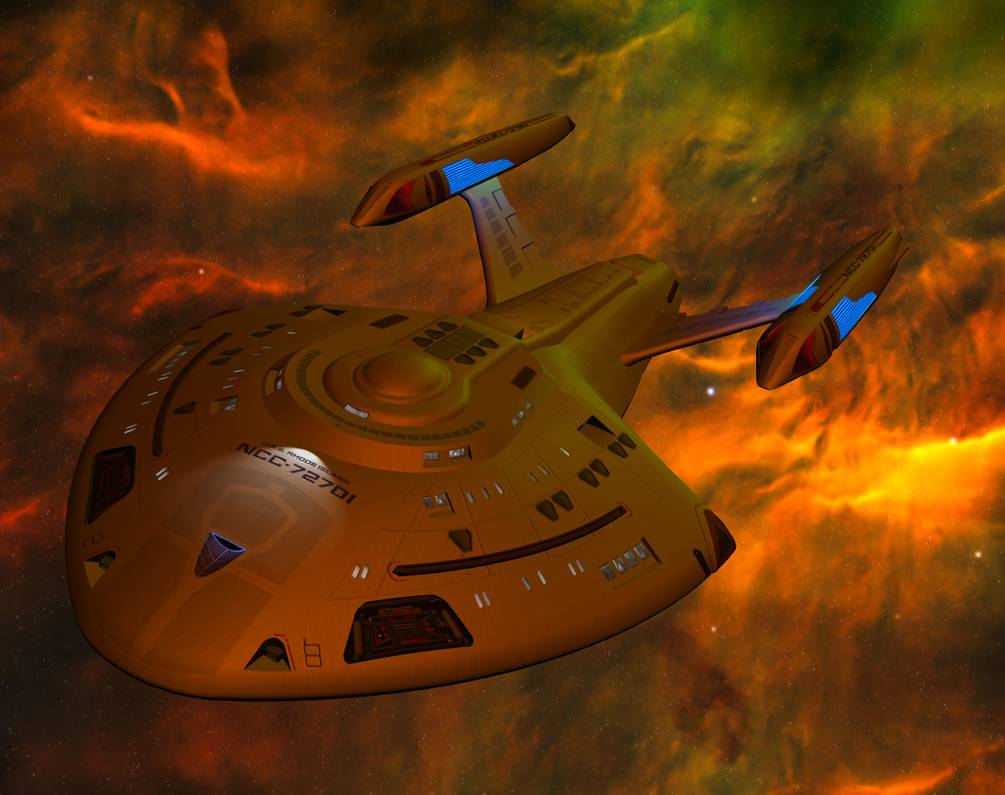 Based on the earlier Nova-class, the Rhode Island-class is one of the most advanced ships of her size. Sleek and fast, she is equally capable as a fast exploration platform that can quickly map unknown space and as a tactically-oriented scout that can use her powerful sensor platforms to seek out threat vessels.

The Rhode Island-class is a capable exploration platform, with a high top speed that gives her the ability to scout unexplored systems effectively. She retains many of the science labs from her older sister, the Nova-class, but more of these labs are mission-configurable and she has a smaller complement of scientific personnel aboard. With more labs available to be configured for space sciences, the Rhode Island is more adept at investigating spatial anomalies than her older sister. She retains the advanced sensors from the original design, which can be used for either scientific or tactical functions.

While this class does have one set of VIP quarters and two briefing rooms that could be used for negotiations, it is not suited for diplomatic duties. With a relatively high top speed, Rhode Island-class ships are excellent candidates to transport ambassadors or flag officers to trouble spots, even if they can’t host conferences on their own.

Virtually-identical to the Nova-class in terms of external appearance, the Rhode Island-class is sleek and angular with a triangular primary hull, rounded engineering hull, and two slender warp nacelles. Unlike her cousin, though, additional deck space has been found by reducing the size of the auxiliary deflector and instead giving additional space to decks 3 and 4.

In addition, the modest powerplant found on the Nova-class has been replaced with a smaller version of the Class-9 Warp Drive found on the Intrepid-class, which gives the ship a very high top speed for its size, but with fewer power management problems than found on the even smaller Defiant-class. This does increase the maintenance demands compared to her cousins, but it makes the ship very adept for scouting and patrol missions.

Computer systems aboard the Rhode Island are similar to the Nova, though she has always used bioneural circuitry, rather than having it added later. The ship is also equipped with full-ship holographic projectors as found on the Prometheus-class. Rhode Island-class ships require constant maintenance and a skilled engineering team to keep their advanced systems working together in such a compact platform.

One of the Rhode Island’s primary mandates is to patrol the Federation’s borders and to escort other ships on deep space exploration missions, so she has been fitted with impressive armaments for a ship of her size. Fitted with the same number of phaser arrays and torpedo launchers as her elder sister, they have been upgraded to Type-XII and burst fire respectively, giving her very impressive firepower for a ship of her size. She is still only fitted with forward-firing torpedo launchers, but her maneuverability doesn’t tend to make this a significant weakness.

On her own, a Rhode Island-class ship is adept at hunting raiders or engaging larger threat vessels to detain them until more powerful Federation ships can arrive. The ship excels in fleet engagements, where she is used to screen larger ships and perform in a point defense role. Her powerful sensor arrays make her a very effective scout.

Located on the stern, the shuttle bay is capable of carrying two small shuttlecraft, typically Type-8 or Type-9. It is not suited for runabouts except on a visiting basis. The Nova-class is, however, equipped with a docking cradle for a Waverider-class atmospheric shuttle, which is one of the fastest atmospheric craft in Starfleet. There are two variants of this craft built on a similar chassis, one with sublight-only capabilities and another with warp drive. Roughly similar to a Type-11 shuttle, this craft is capable of extended operations away from the mothership and is typically used to scout out planets.

With a crew of only ninety-five, life on board a Rhode Island-class ship means knowing everyone on the ship. There is often less of a divide between officers and enlisted personnel than on larger ships, simply because there are fewer communal spaces to allow for such a separation.

Senior officers have individual quarters with a combination living area and bedroom along with a private head. The captain and the executive officer have slightly larger quarters on Deck 1, giving them easy access to the bridge, but these are roughly the same as other officers’ quarters due to the size of the ship. Other officers share quarters with private bedrooms, and enlisted crewmembers have bunk beds in suites housing up to eight people.

There are two observation lounges, two mess halls, a gymnasium, and a recreation area, along with two small holodecks.

Following the return of the starship Voyager from the Delta Quadrant in 2378, Starfleet studied the upgrades the crew had performed to the ship with great interest, as well as combing over the logs and records from the starship Equinox which demonstrated the incredible survivability of the Nova-class platform. Intent on replicating these upgrades, Starfleet pulled the Nova-class starship Rhode Island out of active service to serve as a technological testbed, in concert with the large Century-class heavy explorer also in the prototyping stage at the time.

Over four years, the Rhode Island was slowly and meticulously upgraded, spending much of her time in the core of the Federation as various upgrades were integrated and perfected. Her sensible, easy-to-maintain warp core was replaced with a miniaturized version of the Intrepid’s Class-9 engine, with improvements made to the warp coils based off of upgrades tested aboard the USS Sovereign. Quantum torpedo launchers were fitted in place of the single-fire photon torpedo tubes and the phaser arrays were upgraded to the latest Type-XII standards. The auxiliary deflector was made smaller to increase the deck space on Decks 3 and 4 to accommodate additional power trunks to power the enhanced tactical equipment and enhanced life support systems for the slightly larger crew needed to maintain them.

While only ever intended to be a one-off prototype for other new designs, the Rhode Island herself was one of the fastest and most advanced ships in the fleet by 2382, all without the trouble of designing a completely new spaceframe. Maintenance was an issue–the advanced systems taxed her crew–but the longer she was in service, the more of these issues became less of a problem. Consequently, Starfleet ordered an initial production run of 60 of these ships in 2383, intending to use them in a number of roles where a fast, well-armed ship with a small profile might be useful.

During the 2380s and 2390s, these ships proved to be equally capable of deep space tactical assignments, scouting missions, and sustained independent exploration, thanks to their new armaments, enhanced speed, and greater endurance compared to the Nova. The Nova remained in production as it had acquitted itself equally-well as an efficient surveyor with a proven design, leading to a rare situation in which two designs based on the exact spaceframe were in production at the same time.

In the 2390’s, the Elysion-class light cruiser was introduced, following directly from the advancements of the Rhode Island and Century-class ships, completing a design lineage two decades in the making.