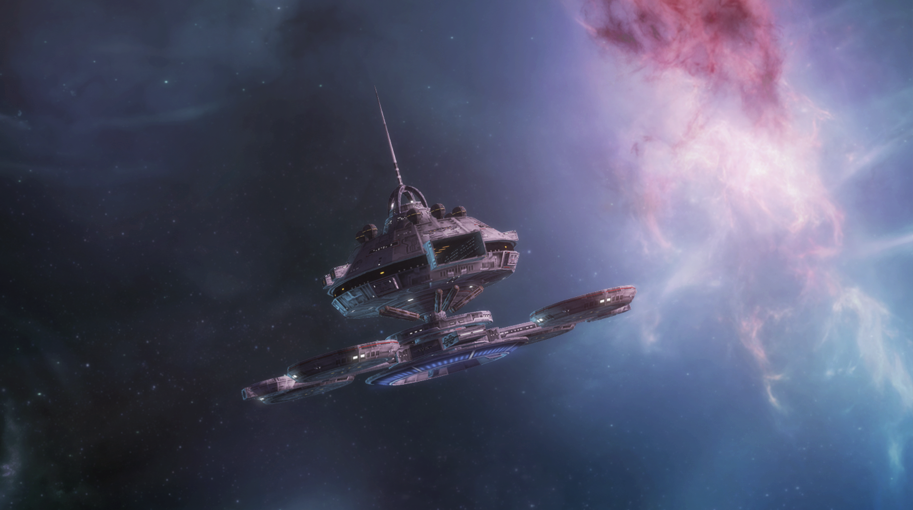 While Starfleet was celebrating the completion, they were also preplexed with another problem. While the new Spacedocks would be built in secure, high traffic areas of the Federation, other sectors needed starbases as well. These sectors didn’t need a massive Spacedock, and most didn’t have a Class-M planet for a planet side base either. In 2279, the first of the Regula Class of Starbases was built in Mutara Sector. This gave Starfleet a new, small type of Science and support base, however there was still a need for a larger base for Starship support and Sector defense.

One of the two major Starbase designs fielded in the 2340’s, and one of the two Regula Class sub-types, the ‘Starbase 375’ variant of the Regula type Starbase is the more combat oriented of the two. Compared to the ‘Starbase 173’ sub-type, this design has reduced scientific facilities, without the telescope dome, and a reduced capability to handle civilian traffic. The base is also designed to operate largely within planetary systems, and as such lacks large bulk cargo and fuel containers. More space is given over to weaponry, with roughly double the armament. The shield generator is identical between the two stations, but the removal of the cargo containers means that this type’s shields need to cover a significantly smaller volume, and this increases their overall strength.

Starbase 375 was established near to the Cardassian border, and was an important base during the Dominion War. Admiral Ross was based on the station, along with his aide Captain Sisko. Many important operations were planned and staged from here, including the operation to destroy the Dominions advanced sensor system and the operation to retake Deep Space Nine.

Today, there’s many of the Regula Type-3 Starbases in operation within the Federation. These include the original SB375, as well as SB503, AFY’s R&D Center and Echelon Station.