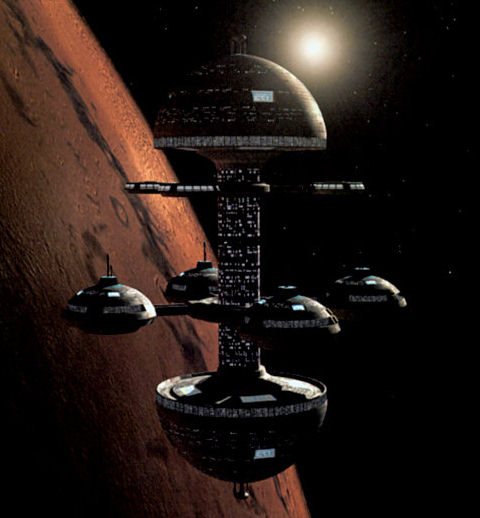 The Presidium-class starbase is Starfleet’s primary forward deployed starbase design. Unlike the larger Spacedock or Aurora starbases which serve as hubs of activity in the Federation’s bustling core, the Presidium is usually most often seen as the Federation presence on the frontier. Much like the prior Regulus-class it fills the Starfleet requirement for a mid sized, self sufficient orbital station. The station design combines the design elements of the Spacedock and its strong central core with the Regulus and modular expansions.

The station is centered around two large fusion reactors housed in the center of each central dome at each end of the station. Either of these two reactors are capable of powering the station alone and are traditionally run concurrently at reduced power output. These central domes also house the stations shuttlebays and runabout pads, divided equally between each dome. The shuttlebays are located at four equidistant points along the outer dome with the four runabout pads are on the inner surface. The upper dome is devoted primarily to Starfleet facilities and command and control and the bays are used exclusively by Starfleet craft. The lower dome by contrast is devoted mainly to port and civillian operations and the bays there are used for visiting craft including civilian transit. The two primary domes are connected in opposition by a central core with modular facilities radiating out from it. The lower modules are the habitat domes and often contain shops, dining establishments, and recreational facilities in addition to quarters for guests and station personnel. The smaller upper modules are mostly devoted to Starfleet and often contain labs, secure cargo bays, and other fleet facilities.

By the late 2350’s the Regulus-class was starting to show its age. Having served as the workhorse of Starfleet for the better part of the last century, the Regulus had lost its technological edge. As another round of refits to their existing space platforms got under way in 2355 Starfleet issued a design brief for the next generation of starbases. It was decided to use an existing spaceframe design to form the basic structure of this new station in order to expedite development.

The design that was chosen had originally been developed in the 2340’s to be constructed as orbital habitats throughout the Sol system. First deployed as part of the orbital facilities of Utopia Planitia Fleet Yards these habitats had proven quite adaptable and capable structures. Starting with the basic structural elements of these habitats, the Advanced Starship Design Bureau worked to develop a new independent station. The design brief called for a station capable of supporting several auxiliary craft as well as provide a secure anchorage and repair suppor for visiting starships. Additional tactical systems when compared to the older Regulus stations were called for as well with provisions for further upgrades and expansions.

Work progressed quickly with the initial prototype constructed in high Neptune orbit to serve as a replacement for several decommissioning orbital facitities in the outer Sol system. Initial module fabrication and assembley was completed at Utopia Planitia with the completed sections being towed at impulse speeds to Neptune for final construction. The new Neptune Station was brought online on March 3rd, 2363 for testing and systems optimization. These trials took the next six months with the station being declared operational in August of that year.

With the successful deployment of the initial prototype full production commenced starting in early 2364 with the goal of replacing several Starfleet facilities including most of the remaining K-class stations. Progress in construction of these new stations stalled the next year however as Starfleet’s focus shifted to the construction of new starships following the Enterprise’s encounter with the Borg. Following the reduction of the threat of Borg attack, the first stations were deployed starting in 2370. Production priorities shifted once again during the Dominion War as Starfleet needed to replace wartime starship losses. Following the cessation of hostilities starbase construction surged to levels unseen in the last century with Starfleet simultaneously retiring older starbases in addition to rebuilding stations destroyed in systems conquered by the Dominion.

Today the Presidium-class can be seen across the Federation serving in many different roles. While many are used as the standard Starfleet fixed facility, there are several serving as hubs of trade or as research outposts. Many planetside bases that have expanded their orbital facilitates have added the Presidium-class as their primary orbital presence.