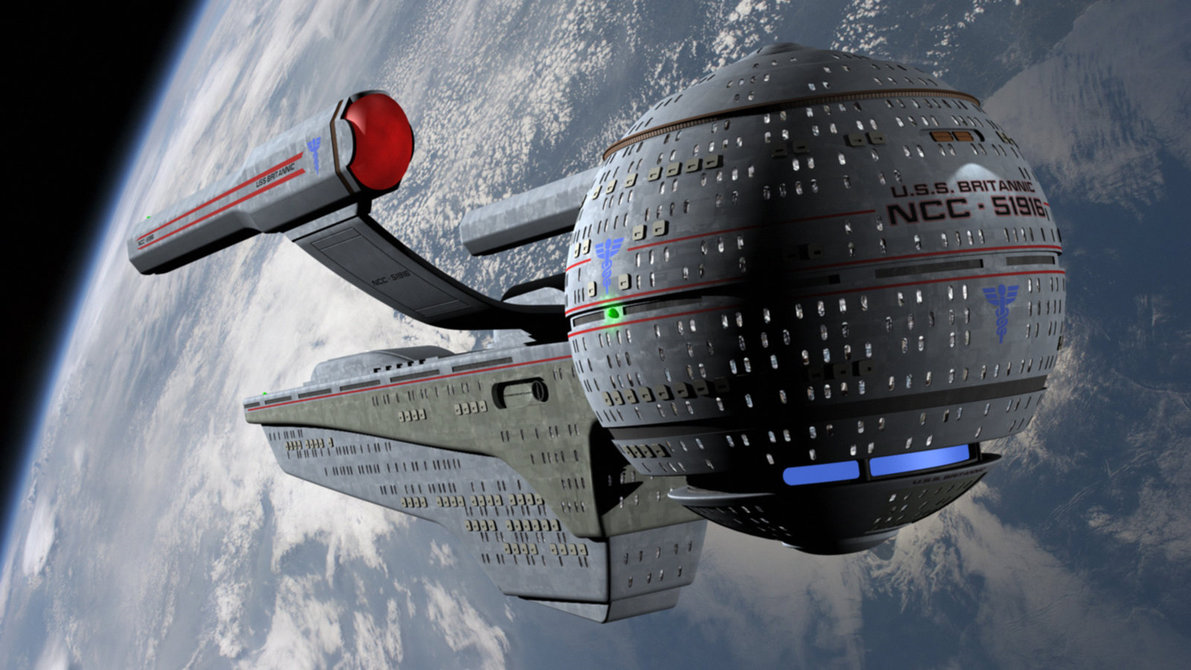 Most prominently known for its hospital ship sub-type, the Olympic-class cruiser is a large Starfleet and Federation civilian vessel that specializes in moving large numbers of people from place to place quickly and safely, especially within Federation space. The most common configurations manufactured are passenger transports, hospital ships, and research vessels. They can be seen throughout the Federation healing the sick, transporting civilians, and furthering the pursuit of knowledge.

Olympic-class starships boast long bands of lateral sensors on both their primary and secondary hulls, giving them expansive sensor coverage in all directions. In the medical and transport sub-types, these sensors are primarily used for navigation and to know well in advance before any potential threats intercept them. In the research cruiser configuration, they feed data directly into twin advanced computer cores and sensor analysis suites to allow their crews to scan space with incredible precision.

In the medical and transport sub-types, there are several science labs should the need arise. In addition, the medical variant has ten dedicated medical labs and ten general biolabs to facilitate medical research and the analysis of patient samples. In the research cruiser variant, there are 20 configurable labs, 10 space science labs, 10 planetology labs, and 10 biolabs, allowing for hundreds of projects to be completed at once. All three variants possess a launcher system in the primary hull for probes.

As compared to smaller science vessels like surveyors, an Olympic-class ship in its research configuration is one of the most powerful research platforms for work within Federation space; it is essentially the science department of a large explorer-type ship, without all of the additional tactical systems or the extra fuel and life support systems it would need for long-range missions without support. The medical and transport variants are not suitable for exploration.

Olympic-class ships represent the Federation’s humanitarian inclinations and are large enough to easily handle diplomatic negotiations, however their specialized mission parameters often make them unavailable or uneconomical for such missions. All variants of this class are equipped with a full diplomatic suite, conference rooms, and meeting halls. In the transport variant, these spaces are often used to entertain passengers, while in the science and medical variants, they are often used to host conferences for visiting scholars.

An Olympic-class ship is not a suitable first contact platform and requires an escort in most situations where an unknown race’s intentions are unclear.

One of the reasons for the creation of the Olympic-class ship in the first place was that many of Starfleet’s auxiliary vessels were repurposed light cruisers or frigates (such as the Miranda-class transport and science vessel variants) with varying and often inadequate power generation capabilities. The Olympic has a powerful, reliable warp core based off of the Ambassador-class design that provides all of its scientific and life support systems with optimal levels of energy, while also giving it an impressive top speed, given its much lower mass.

The design of the Olympic-class is built to optimize hull space for viewports, a philosophy that runs contrary to most other starship design philosophies. The purpose of this is to cater to most biological organisms’ discomfort with feeling confined, given that the primary purpose of this class is to move people from place to place. As such it has a large, spherical primary hull (a design only seen elsewhere in the Daedalus-class vessel), connected to a long, tall secondary hull, with two slender warp nacelles. Both of these hulls are covered in windows, as there are crew quarters (or passenger staterooms or patient rooms) on nearly every deck.

Designed to require a minimal engineering and command crew, most of the systems on the Olympic are automated. There are enough engineers aboard to keep them running and perform routine maintenance, but most of the crew space is given over to mission-specific personnel.

The large aft shuttlebay is capable of holding several dozen runabouts, large personnel shuttles, and other craft. It is positioned directly aft of a large transporter complex with eight personnel transporters, connected to the ship’s primary port and starboard airlocks. This complex serves as the common point through which passengers or patients enter the ship, to either be greeted or triaged as is appropriate. There is also a runabout pad on the stern of the ship, to allow multiple simultaneous departures or recoveries to occur at once.

The Olympic is not a combat vessel. It has three Type-IX phaser arrays, two on the north and south poles of the primary hull and one on the aft end of the ship. These are primarily used to warn off small raiders or for navigational and scientific purposes, such as cutting into asteroids. The probe launcher could theoretically launch torpedoes, but they are not stocked on any Olympic-class ships to maintain their non-combatant status. Security details aboard the ship are also restricted to hand phasers only, no rifles or other heavy ordnance.

The ship is, however, equipped with shields as powerful as you would find on an explorer, powered by her ample warp core. In addition, her best defense is her speed: she can easily outclass almost any threat long enough to get help. On top of that, the Federation has made it a policy to respond extremely aggressively to attacks on these peaceful vessels, so their reputation alone makes any pirate think twice before attacking one.

Olympic-class ships are quite comfortable to serve on. Demands on the command, engineering, and support crews tend to be low, as the ships are largely automated. Ships configured for medical or science duties have large crews of doctors and scientists who operate in a very collegial environment, typically with a captain drawn from the appropriate branch of service. There are a dozen holodecks and two dozen holosuites, which can also be used as medical facilities should the need arise, along with multiple lounges, an arboretum, gymnasia, and a library. The corridors are wide and bright, both to accommodate gurneys and to help the crew deal with extended periods in space.

A standard sickbay module is located near the center of the primary hull in all three variants, equipped with an EMH and substantial supplies. All Olympic-class ships have been upgraded to use full-ship holographic projectors, which can also be used to turn the cargo bays into medical facilities.

The transport variant is the simplest version of the Olympic-class and the most common. Simply put, she is a fast, well-appointed ship that can move 2,000 passengers from one end of the Federation to the other. The most common mission for this variant is as a colony transport, though a select few operate on regular passenger routes between the core worlds and the edges of the Federation. The majority of these ships are under civilian control with NAT registry prefixes, though Starfleet maintains a few of these ships for evacuation and troop transport purposes. In addition, two are under the auspices of the Starfleet Corps of Engineers which uses them to transport large numbers of engineers to worksites such as starbases under construction. All of them can be called up by Starfleet in emergency situations and all of them are suitable for conversion into hospital vessels within ninety days.

The medical variant is the most commonly employed version of this ship used by Starfleet itself, with two dozen of them stationed at strategic areas around the Federation and another two dozen in ready-reserve at starbases in the Federation core. This variant has a hospital staff of 750 and can treat up to 1,000 patients at once. The triage facility is located in the neck of the ship, directly forward of the transporter and shuttlebay complex, so as to triage patients effectively before they are sent either to the intensive, intermediate, or limited care wards.

Hospital facilities are located in the primary hull, which makes this variant unusual in that most of the crew quarters are located in the secondary hull. There are individual patient rooms for approximately 400 people, but these rooms can be doubled up when necessary. Several independent EMH programs are available, along with specialised nursing holograms to supplement the biological crew.

A few of these vessels are owned and operated by civilian agencies.

The science variant is the rarest version of the Olympic-class with only a handful of examples currently in service, using their large hulls to carry expansive labs and large crews to staff them. They are mostly used within Federation space because of their size, and frequently host hundreds of visiting scientists at a time. Several of these ships are operated by civilian institutions such as the Daystrom Institute and Memory Alpha. Typical assignments for this variant would be either bringing a panoply of resources to bear on a very specific scientific question or serving as a hub for several surveyors to report data back to.

Towards the middle of the 24th century, an increasing number of older vessels were being repurposed from frontline roles to auxiliary roles, including a large number of Miranda-class ships. These vessels were frequently turned into transports, science vessels, or medical vessels. Starfleet Medical had been lobbying for decades for dedicated hospital vessels, but it had never been a priority for the fleet, given that all Starfleet vessels were generally competent in most humanitarian duties and starships like the Ambassador or Excelsior-class were generally able to get patients to starbases when needed. This was becoming increasingly inefficient as the size of the Federation grew. On top of this, these converted vessels often simply weren’t very good in their new roles, especially when it came to transporting passengers long distances.

In 2355, Starfleet tasked the ADSB with designing a large vessel that would have a total capacity of at least 1,800, but which would omit the tactical systems found on larger explorers along with most of their science facilities, in favor of a design that could be configured as a personnel transport or as a hospital vessel. The design process for this vessel took approximately five years, as it was never a high priority, but what emerged was a solid, dependable design that took the best of what had worked in earlier classes and a few innovations from contemporary designs like the Galaxy and Nebula-classes, but mostly avoided innovation in favor of reliability.

With a type-six warp drive, she would have impressive speed given her lack of bulk compared to the Ambassador, but boasted facilities for 2,000 passengers or 1,000 patients, depending on the configuration, while only requiring a crew of 150 to operate in normal situations.

Starfleet initially ordered 24 hospital ships and 8 transports, with other Federation agencies ordering a further 30 transports, mostly for colony transport duties. During construction, Starfleet Science began to take an interest within the vessel and proposed a research cruiser that could be deployed within Federation space, without needing to be significantly reworked from the transport variant. This interest was shared with the Daystrom Institute and the Vulcan Science Academy as well, leading to a third variant, which Starfleet ordered 8 of for itself and a further 8 to be allocated between various research agencies.

The first units of the Olympic class began to leave the yards in 2364, with full commissioning by 2365. These ships became a rare but welcome sight in the Federation, serving with special valor in war zones during the Dominion War in the mid-2370s.