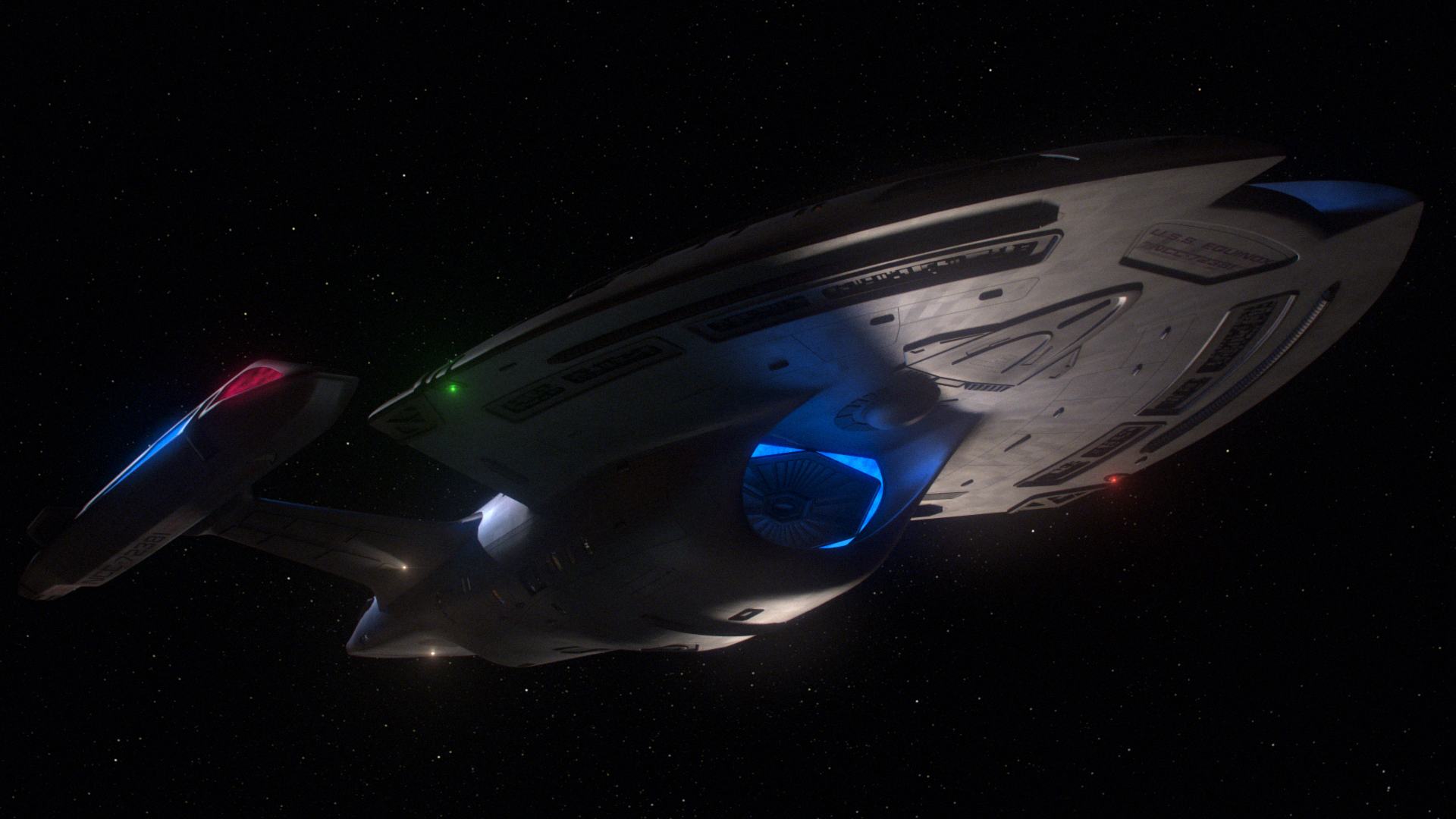 The Nova-class surveyor is one of the most common science vessels in Starfleet, with several hundred having been built since the class was introduced in the 2370s. Efficient and well-equipped, her primary purpose is to perform in-depth surveys of planetary systems and especially of M-class planets for possible colonization.

The Nova-class is one of the most capable scientific platforms in Starfleet for short-duration exploratory missions. The Nova’s primary mission profile is in-depth surveys of star systems and planetary bodies. While larger ships might visit dozens if not hundreds of star systems in years-long indefinite missions, ships of this class are often sent to a single star system where they will linger for six months or more and perform a comprehensive assessment based on initial scans by an explorer-type vessel. The Nova-class has scientific facilities specifically geared towards exploring M-class planets and evaluating them for colonization and resource exploitation, including eleven science labs of varying types, an extensive set of sensor arrays, and a large complement of probes. One key feature of this class is a project control center located forward of the main bridge which allows the science department to coordinate its effort across all of its labs and any away teams.

While this class does have one set of VIP quarters and two briefing rooms that could be used for negotiations, it is not suited for diplomatic duties. Its low top speed also limits its utility as a diplomatic courier.

Based on one of the rejected designs for the Defiant-class, the Nova-class has a compact, angular hull that is in a clear design lineage with her larger sister: the Intrepid. Spanning just eight decks, Nova has a roughly-triangular primary hull with a cut-out in the bow for an over-sized secondary deflector, which is also part of the ship’s long-range sensors systems. A single impulse engine at the aft end of the saucer provides sublight power, above a door connected to one of the cargo holds. The engineering hull is small and roughly cylindrical, and the small warp nacelles are mounted on angled pylons.

While the design was initially intended to be a tactical vessel capable of extremely high warp speeds, the modified Nova-class design replaced her powerplant with something much more mainstream that is both incredibly reliable and easy to maintain, but which limits the ship’s top speed to Warp 8. This is more than sufficient for the majority of her missions.

The Nova-class is capable of landing on planetary surfaces with a set of four landing legs. There is a ramp in the stern that extends to allow the crew direct access to a planet’s surface. This feature is often used to study planets with difficult atmospheres or to serve as a temporary research base near especially interesting objects.

Computer systems aboard the Nova are state-of-the-art to handle the vast amounts of data coming from her oversized sensor arrays. While not initially designed with bioneural circuitry, it was later installed once the technology had been proven aboard Intrepid. Later units include full-ship holographic projectors.

One of the major flaws of the Oberth-class design was that it was entirely unsuited to combat. This led to many ships of the class being picked off by raiders or pirates during their long service history. Thanks to having been based on a warship design, the Nova-class is much more capable of defending itself with two torpedo launchers on the bow and numerous Type-X phaser arrays providing 360-degree coverage around the ship. In addition, the bridge is more shielded than other starship designs, thanks to being located in the center of a larger-than-usual deck one.

Though slow for a Starfleet ship in terms of absolute top warp speed, the Nova is nonetheless highly maneuverable and speedy at sublight and is significantly faster than most civilian or pirate vessels at warp. Typical tactics for ships of this class are to literally fly circles around threat vessels, lob a few torpedoes at them, and then jump to warp. When that is not possible, they are capable of dogfighting in the hands of a talented helmsman.

The Nova is not fitted with aft-firing torpedo launchers due to size constraints, but the crew of the starship Equinox was able to jerry-rig a launcher system in the lower cargo hold during their exile in the Delta Quadrant.

Located on the stern, the main shuttle bay is capable of carrying two small shuttlecraft, typically Type-8 or Type-9. It is not suited for runabouts except on a visiting basis. The Nova-class is, however, equipped with a docking cradle for a Waverider-class atmospheric shuttle, which is one of the fastest atmospheric craft in Starfleet. There are two variants of this craft built on a similar chassis, one with sublight-only capabilities and another with warp drive. Roughly similar to a Type-11 shuttle, this craft is capable of extended operations away from the mothership and is typically used to scout out planets.

With a crew of only eighty, life on board a Nova-class ship means knowing everyone on the ship. There is often less of a divide between officers and enlisted personnel than on larger ships, simply because there are fewer communal spaces to allow for such a separation. This is also due to mission parameters that often require extensive collaboration between departments and laboratories–when they spend up to a year studying a planet, the crew often starts to develop an attachment to it and they take great pride in talking about the day’s discoveries.

Senior officers have individual quarters with a combination living area and bedroom along with a private head. The captain and the executive officer have slightly larger quarters on Deck 1, giving them easy access to the bridge, but these are roughly the same as other officers’ quarters due to the size of the ship. Other officers share quarters with private bedrooms, and enlisted crewmembers have bunk beds in suites housing up to eight people.

There are two observation lounges, two mess halls, a gymnasium, and a recreation area, along with two small holodecks.

There is a modest three-bed sickbay located on Deck 2, with an attached medlab. There is an additional biobed in a secondary medlab which can also be used for surgery or as an isolation room.

By the 2360’s, the Oberth-class had been Starfleet’s primary surveyor design for nearly a century and was beginning to reach the end of its useful lifespan due to a number of factors, chief among them being its low overall top speed, fragility, and cramped quarters. Starfleet charged the ADSB to develop a new class of surveyor that would improve upon these flaws and be better suited towards exploration in the increasingly dangerous galaxy. The Springfield which had come online in the 2340s ostensibly to replace the Oberth never saw production in large numbers and never struck the right balance between cost, speed, and capability that Starfleet was looking for, and the smaller Raven-class surveyors launched in the 2350s were simply not large enough to replace the Oberth as a fully-staffed research vessel for in-depth planetary surveys.

Several design studies were completed during the mid-2360s, but the project was not given a high priority, given the sheer number of Oberth-class ships still in service and other shipbuilding needs across the fleet, especially after first contact with the Borg in 2365 triggered a massive building project involving a host of new starship classes optimized to fight them. This fleet modernization unexpectedly benefited the Nova-class project, however, when a rejected design study for the Defiant-class escort was made available. Initially billed as a high-warp torpedo boat, the design was stripped of all but two of its torpedo launchers and fitted with powerful sensor arrays and science laboratories in their place.

Final design work and construction on the two prototypes, Nova and Equinox continued through 2370, when they were launched for their space trials and final fitting out. The project suffered a significant setback when Equinox was lost in 2370, pulled into the Delta Quadrant by the Caretaker. Construction on the remaining 8 ships in the initial order was suspended until an inquiry proved that the loss was not a fault of the design itself, but the outbreak of the Dominion War in 2373 put a hold on those units until the cessation of hostilities. This left the USS Nova herself in the unique position of being the only operational ship of her class–at least until it was revealed in 2376 that the Equinox had not been destroyed in 2370, but had managed to survive for 6 years alone in the Delta Quadrant in the harshest of conditions–for over seven years.

Once construction resumed, the class quickly proved to be popular among both the admiralty and the officers manning them, due to their modern facilities and reliable nature. Construction was increased to ten units per year starting in 2379, and then fifteen a year in 2383.

Following the return of Voyager in 2378 and after extensive analysis of her logs and the logs of the Equinox a companion class was developed that would be designed for long-distance exploration and patrol missions, rather than short-duration survey missions, but the Nova-class continued to be constructed as designed in parallel with this new class.

Because of her enhanced tactical systems, the Nova remains Starfleet’s first choice for performing surveys in areas of space that are not completely secure both within and outside of Federation space, but she has been supplemented for missions in safer areas of space by the cheaper, less well-defended Dumont-class surveyor since the late 2380s.