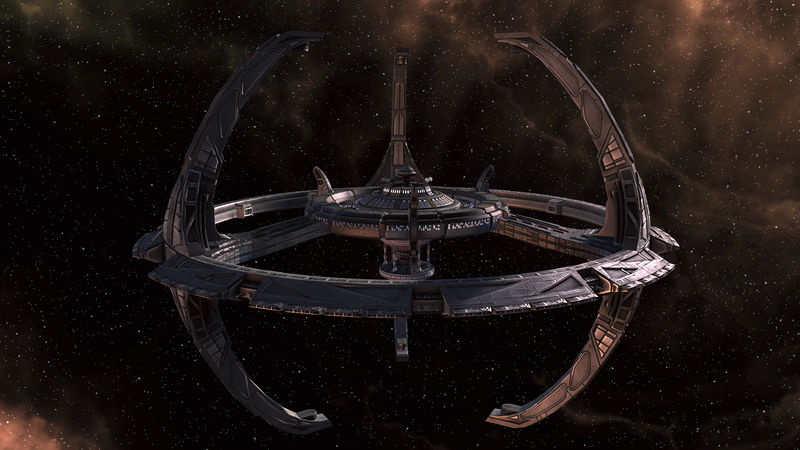 One of the most unique types of installations under Federation administration, Deep Space Nine and Deep Space 12 started their lives as Cardassian space stations. DS9 in orbit of the planet Bajor, and DS12 orbiting Markez II. DS9 was built in place by Bajoran slave labor during the Cardassian occupation of that planet. Terok Nor, as it was then known, served as a major administrative center for the Cardassian forces as well as housing a large ore processing facility manned by Bajoran workers. Little is known about the early days of DS12, Durok Nor. The base was built in orbit of Markez II, but during the Dominion war’s final months, the Cardassians withdrew from the base and it was later taken over by Federation forces and fortified by Starfleet. The stations have no Warp or Impulse drive and not suited for towing. They are therefore considered fixed orbital bases with a very limited ability to maneuver in space. However DS9 was slowly moved near the mouth of the Bajoran Wormhole to guard it, as was DS12 moved to a location near an Iconian Portal to protect it. Their sister station, Empok Nor is sits un-occupied just within Cardassian space, however the Cardassian government has been looking into re-occuping the station as a military base.

Following the Cardassian withdrawl, the Bajoran provisional government had neither the equipment nor the experience to run a space station like Terok Nor. In addition the intentions of the Cardassian government regarding their sovereignty were unclear, so the Federation was asked to take over command of the station and operate it for the Bajoran people. Starfleet appointed Commander Benjamin Sisko to run the station and he assumed command in 2369. Initially the station, renamed Deep Space Nine by Starfleet, was intended to operate as little more than an orbital port facility. The outgoing Cardassian forces had rendered the ore processing systems non-functional, while many other major systems had been badly damaged.

However, fate had other plans for DS9. Within days of Commander Sisko taking over the station a wormhole was discovered nearby. An artificial anomaly created by a race of sentient beings, this wormhole is unique in being completely stable. Chief Miles O’Brien was able to modify the stations shield system to allow it to be moved at modest sub light speed, and DS9 was moved to the mouth of the wormhole where a Bajoran officer claimed the anomaly for the Bajoran government, over the objections of the Cardassians.

Subsequently, Deep Space Nine has become a major stopping off point for traffic travelling to the Gamma Quadrant via the wormhole. The revenue generated by the station has been a great boon for the Bajoran economy, making both the station and the planet a major center of trade and diplomacy in the region.

In 2370 the Dominion declared that the Gamma Quadrant end of the wormhole now belonged to them. In the brief battle that followed the Galaxy class USS Odyssey was destroyed. A subsequent Federation threat to destroy the wormhole if a Dominion fleet attempted to come through established a fragile stalemate. As the front line against this new threat, Deep Space Nine moved much higher on Starfleets priority list. The USS Defiant was assigned to the station and Starfleet began to assign regular starship patrols to the area.

A general refit and upgrading of the station’s armament systems was also undertaken. The original Cardassian design mounted six compression phaser banks and six photon torpedo tubes on small towers on the Habitat Ring. Starfleet engineers installed Rotary Weapon Systems on each tower. These carried four Type-X phaser arrays and four torpedo tubes each. An additional fixed weapon emplacement on each tower carried one torpedo tube and eighteen phaser arrays. In addition to this a set of Retractable Weapon Emplacements was installed, twelve on the Habitat Ring flanking the towers and a further six on the main Docking Pylons. Each of these weapon emplacements carries another single torpedo tube and five phaser arrays.

The station got the chance to use its new weapons system in anger almost the moment it was finished when Captain Sisko rescued the Cardassian leadership from the Klingon invasion. A Klingon task force under Chancellor Gowron and General Martok attacked Deep Space Nine in order to capture the Cardassians. In the ensuing battle several dozen Klingon warships where destroyed or severely damaged, although the heavy disruptor cannon of the IKS Negh’Var where able to penetrate the stations shields sufficiently to land boarding parties. The arrival of Starfleet reinforcements forced the Klingons to stand down and withdraw back to Cardassian space, beginning several months of conflict with the Federation.

When the Dominion took over Cardassia and forced the Klingon fleet to retreat, Gowron reinstated the Khitomer Accords and a combined Federation-Klingon-Romulan fleet made a stand at Deep Space Nine against the expected Dominion assault. In the event, the situation proved to be a Dominion ruse designed to destroy the fleet along with the station and the rest of the system by detonating a trilithium device within the Bajoran sun. The attempt was unsuccessful, and an uneasy stand off against the Dominion ensued.

This situation lasted for less than a year. At the end of 2373 a Dominion fleet of over two hundred warships attacked DS9 in response to the Federation setting up a mine field at the wormhole exit. Although the station was overwhelmed and captured, the Federation crew under Captain Sisko were able to destroy over fifty Dominion vessels during the attack, and activate the minefield to block the wormhole. In addition, while the Dominion was occupied at DS9 a Federation-Klingon task force launched a major attack against a large Dominion shipyard in Cardassian space, destroying the yard, the ships in dock, the supporting facilities and supplies, and the small force assigned to defend the facilities.

Deep Space Nine remained in Dominion hands for nearly four months before a combined Federation-Klingon fleet was able to recapture it in a violant battle that took a heavy toll on both sides. The station remained under the command of Captain Sisko for the rest of the war, functioning as the home base of the Federation’s 9th Fleet.

Shortly after the war was concluded in 2375, Captain Sisko was able to stop the Pagh-wraiths from breaking out of their prison in the fire caves on Bajor. Sisko then joined the prophets in the wormhole, and Colonel Kira took command of Deep Space Nine in his absence. It’s uncentian when, or if Captain Sisko will return. He told his pregnet wife, Kasidy, he could return ‘tomorrow or yesterday’, as the Prophets live outside the normal space-time continuum.

Deep Space Twelve has had a much less eventful history, but nonetheless very important. In 2373, several Starships of the 4th Fleet took control of Durok Nor after is was abandoned by the Cardassians. The USS Pegasus-A was heading back toward the Cardassian/Dominion front lines following an ordered shore leave. At the time, the Federation/Klingon/Romulan fleets had pushed the Cardassians and Dominion out of 3 star systems. In one, the Markez system, there sat an old Cardassian Nor Class Mining station, orbiting Markez II. The starships Pegasus, George Washington, Calidorn, Thunderchild, Bonnventure, and Wildchild teamed up to check out the station and occupy it as a new Federation Deep Space Station. However, the Dominion attempted to regain control of the Station, but tough fighting kept the Station in Federation hands.

Currently, there are 3 in service within the Federation, all others that fell into Federation territory after the Cardassian and Dominion Wars deemed damaged beyond hope of repair. Intel estimates another 30 in Cardassian space with only a few known to exsist for a fact. Known Nor Class stations: