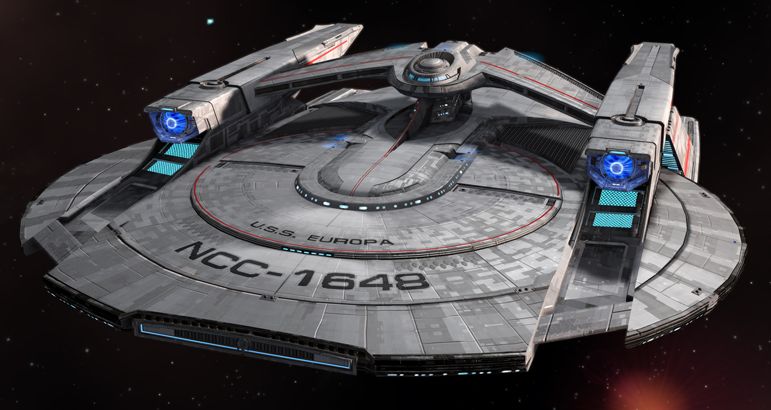 In 2242 the design plans that would become the Nimitz Class were put before the Advanced Starship Design Bureau after a short review of the design they were accepted and construction of the USS Nimitz was started at the Antares Ship yards in 2243. During the construction of the Nimitz advancements in hydrogen collection technologies led to a redesign of the Bussard collectors for the Nimitz. This redesign led to a longer construction time than expected. Originally the Nimitz was slated to launch in 2246 but did not launch until the later part of 2247. After a six month shake down cruise the USS Nimitz was officially commissioned.

The Nimitz class design stands out as one of the few ships classes that had a four nacelle design. Other ship classes that also supported a four nacelle design were the Cardenas, Cheyenne, and Prometheus classes. The Nimitz class had the ships bridge on deck one at the highest point on the ship with a connection pylon coming off each side of decks two and three leading to the dorsal pair of nacelles. These connection pylons house the ships impulse engines. There is a neck like section of the hull that extend from the upper command section to the saucer like main body of the ship’s hull. Near the port and starboard edges of the saucer there are the primary nacelle pylons. One set of pylons extend up from the dorsal surface of the saucer to the dorsal nacelles and are the primary support structures for these nacelles. There is a second set of support pylons that extend from the ventral surface of the saucer to support the ventral set of nacelles. At the forward most point of the saucer is the ships defector dish and at the aft most point of the saucer is the ships shuttle bay. The Nimitz class is equipped with a large cargo bay in the ventral side of the saucer. This cargo bay is equipped with a large, aft facing, bay door to facilitate the easy loading and unloading of cargo and ship supplies.

Like most Starfleet Vessel the Nimitz Class was primary designed to carry out missions of exploration and to this end these ships were equipped with a full suite of sensor systems and science and medical research labs. Ships of the Nimitz class could be found operating in the farthest regions of the Federation and in the sectors just beyond Federation borders.

The Nimitz Class ships were also capable of carrying out missions of a more tactical nature. With a total of four torpedo launchers with two covering the forward firing arc and the reaming two covering the aft firing arch and a total of eighteen dual emitter phaser banks. Ten of these phaser banks are mounted to the dorsal surface of the ships hull and the remaining eight phaser banks are mounted to the ventral surface of the hull. At least one ship of this class was seen at the Battle of the Binary Stars and more saw action during the war with the Klingon.