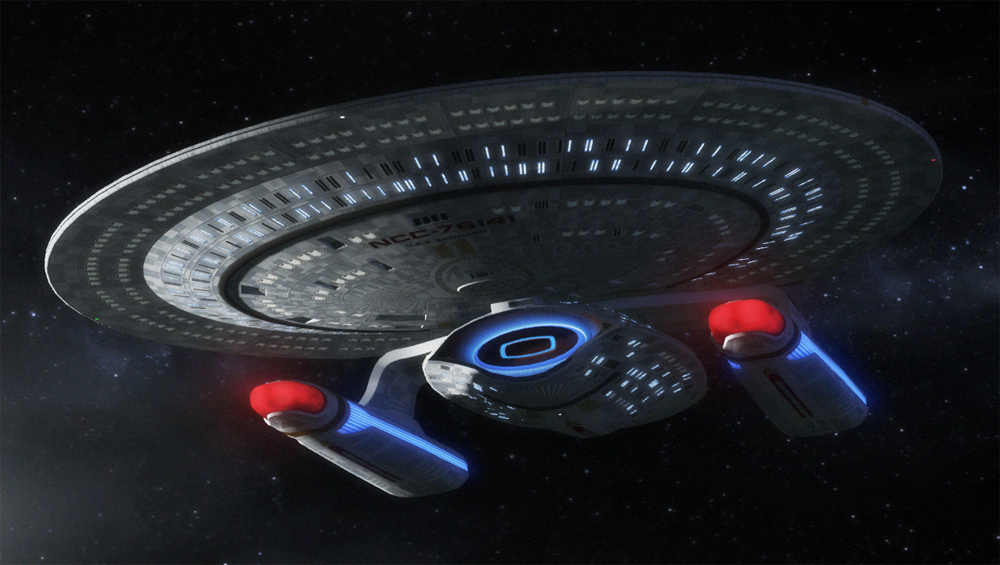 In the year 2343 the design for a new multi-mission starship, the Nebula Class starship, was approved. Compared to the Galaxy Class the Nebula has a more compact shape; the engineering hull is mounted directly to the underside of the saucer section, a measure which saves some 200 meters in length.

This enables the vessel to carry any one of a variety of special equipment Mission Pods – current models include a Sensor Pod, an enhanced Tactical Pod], a colony transport pod, an emergency field hospital unit, or a science laboratory pod. Although the basic Nebula design has approximately 80% of the capability of a Galaxy Class vessel in most areas, the addition of the mission pod brings that figure up to 95% or more in that specific area. This flexibility actually allows the Nebula design to accomplish almost almost identical missions despite its smaller size.

In service the Nebula Cass has proved highly satisfactory, and in many ways these ships form the backbone of Starfleet’s exploratory and scientific programs. Like the Galaxy class they have received regular upgrades to their systems, most notably a new warpcore design. With the advent of the threats from the Romulan, Dominion and Borg, Starfleet invested in sixty seven new enhanced weapon pods for the Nebula class; most of the vessels now carry this as a standard item.

As part of Starfleet’s war effort many of its ships have been upgraded to increase their combat capabilities. The upgraded Nebula design has a maximum warp speed of Warp 9.6 and incorporates improvements to the weapons and targeting systems, a high level structural integrity field, and various other classified changes. All Nebulas now being produced are of the upgraded model, and all of these are launched with the enhanced weapons pod as standard. Though production has shifted in favor of the Ronin and Kelvin Refit classes in the last decade, the Nebula remains a dependable cornerstone of the fleet and will likely remain in service for many years to come.