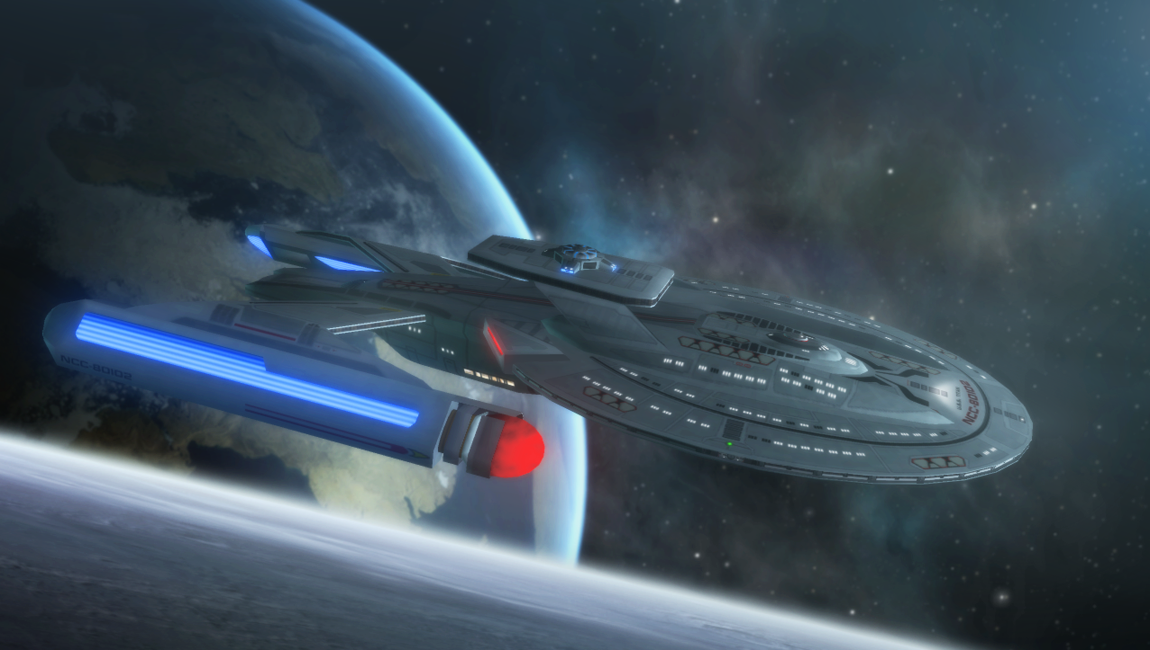 Meant to usher in a new golden age of exploration, the Luna-class was designed in the years after the devastating Dominion War as a modern successor to the Constitution-class: a heavy cruiser meant to embark on extended duration exploratory missions far from Federation space. While less than half of the size of any of the large explorer classes currently in service, the Luna has proven herself to be a highly capable long-range vessel.

Though much smaller than the larger explorer classes, the Luna was designed from the ground up to be able to undertake long-range exploratory missions with the same independence that the Constitution had before her in the 2250s and 2260s. Initially, she was meant for the Gamma Quadrant, but has since seen service in all four of the galaxy’s quadrants. Scientific laboratory space is extensive, with representatives from all scientific disciplines onboard, as well as space for civilian scientists for specific projects. Employing the same lateral sensor bands around her saucer section as the Galaxy and Nebula, the Luna can change out her sensor pallets on the fly to install specialized equipment fabricated in her industrial replicator bays.

With limited support from tenders, the Luna can successfully engage in missions of an indefinite nature, and completely alone she can operate without support for up to seven years. As such, she was one of the first classes to employ a shipboard quantum archive, which can store samples and other items with near-perfect accuracy for an indefinite period of time, which allows her to bring samples back to the Federation after extended excursions into the unknown.

Given that the ship was designed to house non-humanoid life forms and other beings who can’t live in normal class-M environments, the Luna-class science department is able to incorporate perspectives from among Federation member worlds that don’t always get showcased or included, which further leads to the strength of the intellectual community aboard.

The Luna-class is a perfect first contact platform, given that its missions will almost always bring it to areas with new species. It isn’t particularly imposing, though it can defend itself. It has a full diplomatic suite aboard, with multiple conference facilities and guest quarters that can support nearly any known form of life. All Luna-class captains undergo additional training from the First Contact Office on handling meeting new alien species without direct support from the Federation, and the ships have extended anthropology and social sciences sections to support these missions.

As more and more of these units come online, a handful have been retained for the specific use of the Federation Diplomatic Corps and the First Contact Office to conduct first contact missions and other sensitive diplomatic missions near Federation space. They are also adept at serving as flagships, though Starfleet Science has been particularly protective over making sure most of them stay on exploratory duties.

Many of the internal systems aboard the Luna are adapted from the Nebula and Intrepid-classes, with an emphasis on limiting maintenance and improving redundancy where possible. Everything aboard this ship is designed to both be long-lasting and easy to replace if necessary. It is equipped with two high-fidelity industrial replicators which can produce nearly any replacement part, other than dilithium itself. An effect of this is that the Luna is not on the bleeding edge of technology; everything aboard is tested and true, but generally not especially innovative. An exception to this is the advanced life support system aboard, which is extremely robust and redundant, with the facilities to produce atmospheres tolerable by nearly any form of life.

The ship’s shape takes cues from both the Intrepid and Akira classes, with a traditional primary and secondary hull, as well as large underslung warp engines. Above the main hull is a pod containing additional sensor arrays and the primary torpedo launchers. Like on the Constitution-class, the shuttle bay is located on the stern, though there is a longer “runway” present, which can be used to stage formation launches off of the end of the ship.

The Luna-class carries a unique integrated support craft—the captain’s skiff—which is a warp-capable transport equivalent to a runabout. It is docked behind the ventral sensor dome and is intended for diplomatic functions or the personal use of the captain. In addition, there is a standard complement of a dozen shuttles and two runabouts stored in the shuttlebay.

Computer systems are Isoliner-Bio-Neural hybrid, with the bio-neural technology being the primary system in use for many of the scientific systems, while the isolinear technology handles the majority of the ship’s other systems. The ship was designed in this way to facilitate repairs underway, and the entire ship can be converted to isolinear circuitry if it is out of resupply range for too long.

While the Luna-class is not meant for combat—indeed, it was meant to usher in a renaissance of exploration—it is well equipped for it, given that it is often working completely alone. There are two torpedo launchers under the main deflector dish, as well as a single one in the undercut of the secondary hull aft. The mission pod contains two forward and a single aft torpedo launchers as well, which gives the ship substantial torpedo firepower. In addition, Type-XII phaser arrays provide comprehensive beam weapon coverage. This makes the Luna a tough target for most threatening vessels, though her captains are trained to favor negotiation over returning fire in most circumstances.

Luna-class vessels have so far not participated in major fleet engagements, but their intended role is to serve in the cruiser core of a standard Federation battlegroup, using her phasers and torpedoes to defend both larger capital ships and the screen ships around them. These vessels are rarely used for strictly tactical missions, however, as their crews are biased more towards science and engineering.

Designed to be a comfortable place for crews to live for years at a time, the Luna provides well for her crew. Being close in size to the Nebula-class while having a crew of half the size, all crewmembers are provided with their own accommodations. In addition, there are a number of holodecks and holosuites. As featured in the Constitution-class refit of the 2270s, the secondary hull of the Luna includes a large arboretum deck that spans the width of the ship. There is also a lounge on the bow of the ship that is quite popular amongst most crews.

Luna-class crews are among the most diverse and multicultural of any ship in the fleet because of their ability to host so many different species at once. Crews are also generally going to be together for years at a time, which leads to a close-knit shipboard environment. These crews consider themselves to be the successors to the Constitution-class crews of old, and so there is a strong sense of pride that comes with serving aboard these vessels.

The captains of the original Luna-class ships were universally Dominion War veterans who wished to return to Starfleet’s stated ideals and goals of peaceful exploration, and many of those captains continue to hold their commands into the 2390s, which has led to an ethos that strives for peace above all else, and this commitment has been positive in these vessels’ first contact efforts.

The Luna-Class Development Project was initiated in 2369 in response to the discovery of the Bajoran wormhole, and originally conceived as leading a planned Starfleet wave of deep-space exploration in the Gamma Quadrant. The project was spearheaded by Dr. (Commander) Xin Ra-Havreii, a Starfleet theoretical engineer at Utopia Planitia. Field testing on the prototype USS Luna was under way by 2372 in the Alpha Quadrant, and construction of the fleet was scheduled to begin the following year. Unfortunately, contact with the Dominion and the subsequent outbreak of hostilities mothballed the project indefinitely, as Starfleet redirected its shipbuilding resources to the production of vessels better suited to combat.

Upon the war’s end in late 2375, Dr. Ra-Havreii correctly judged that the Federation’s cultural psychology would eventually shift back toward its pre-war ideals, and pushed to have the Luna-class revisited as a major step toward resuming Starfleet’s mission of peaceful exploration (even though the class would no longer be assigned exclusively to the exploration of the Gamma Quadrant). Construction of an initial fleet of twelve Luna-class vessels was completed by 2379, and the Titan was offered to William T. Riker, one of many command officers eager to put the strife of the last decade behind him.

Production on this class continued steadily in the years since then, and they have been extremely popular with their captains and crews. The mid-2380s saw resources again pushed to other construction projects with the Romulan evacuation, but it has resumed and the class remains in production.