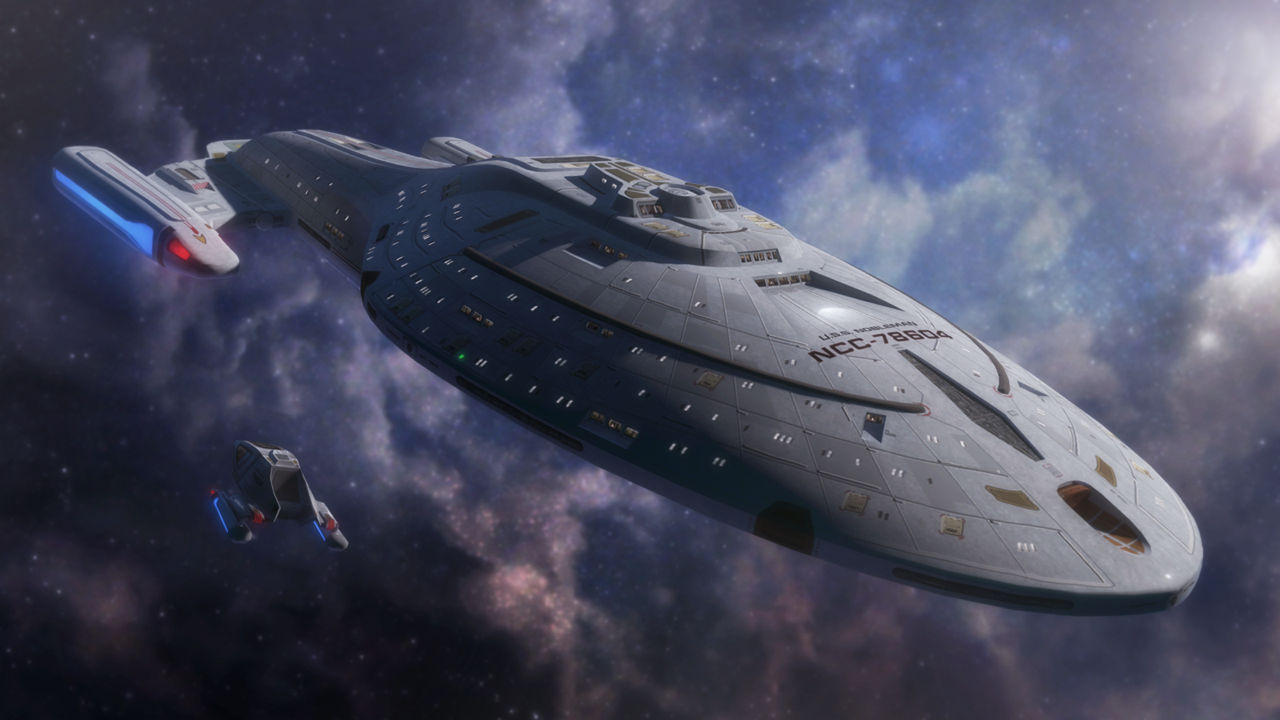 The Intrepid-class starship is the culmination of experimental technologies for Starfleet in its efforts to launch a new generation of exploration type vessels. As a test bed, the Intrepid was a decade in the making to offer the exploration and scientific capabilities of the Galaxy-class without the massive space frame or resources required to operate the much larger Galaxy. The seven year journey of the USS Voyager to return home from the Delta Quadrant only validated the versatility and endurance of the Intrepid-class, making it a mainstay of Starfleet’s exploration arm.

The Intrepid, at the time of its launch, was almost on par with the Galaxy-class sensor suite. Even decades later, few ships of its size are comparable and only large, front-line explorers like the Century-class are able to best it. The Intrepid is widely capable of long-term exploration missions without copious amounts of support; ranging from logging gaseous anomalies to planetary analysis to scanning sub-quantum mass particulates.

The only area that the Intrepid inherently cannot compare with its larger counterparts is available space. The Intrepid is limited in space due to its smaller size which downsizes the amount of labs, research space, and number of scientists it can carry. The limited space on the Intrepid also limits the available length of its deep space assignments. While the Century was built in the same vein of former front-line explorers of being able to complete many multi-year missions, the Intrepid was not. Until the circumstances of the USS Voyager was understood by Starfleet, it wasn’t even believed that the Intrepid could survive that long in deep space without any support.

The Intrepid-class was also given one more unique feature: the ability to land and take off from a planetary surface, a first for a Starfleet vessel. The Intrepid-class hull design allows for a smooth atmospheric entry and egress, while landing gear on the bottom of the vessel supports the starship firmly on the surface of a planet, allowing for all ships systems to be taken offline if necessary. Landing mode was a two-fold problem solver for Starfleet. It allows for both extensive repairs in the field that would otherwise require a spacedock, and also allows for easier transfer of equipment and personnel for any extensive planetary surveys.

Upon its launch, the Intrepid was the test bed for experimental, cutting edge technology that later became standard issue on all ships ahead of it. Among the largest of these technologies is the cutting edge class-9 warp drive, variable-geometry warp nacelles, integrated bio-neural circuitry, and the Emergency Medical Hologram system.

The Intrepid was the first design to implement the new class-9 warp drive which allowed it to top speeds of warp 9.975, which made it the fastest Starfleet vessel at the time of its launch. Additionally, it was the first Starfleet vessel to field variable-geometry warp nacelles. The nacelles, when at warp velocities, pivot up at an angle. These two things combined made it the most subspace friendly vessel that Starfleet had fielded to date with concerns of subspace damage due to extensive warp use spreading across the Alpha Quadrant. It also allowed the Intrepid to sustain much higher warp speeds for much longer periods of time than any vessel before it.

As a supplement to the ship’s medical facilities, the Intrepid was one of the first to also field the Emergency Medical Hologram. Utilizing the holographic emitters in the Intrepid’s sickbay, the program was meant to supplement medical staff in the case of an emergency, allowing a holographic doctor to help diagnose, triage, and treat patients. In the case of at least one starship, it was able to completely replace the ships entire medical staff with several expansions to its program. Overall, the technology proved to be incredibly useful to Starfleet vessels, particularly those Intrepid-class starships on the frontier, and has been supplemented, enhanced, and improved across multiple Starfleet classes since the first implementation on the Intrepid.

Finally, one of the biggest enhancements the Intrepid was first to field over any other starship was its integrated bio-neural circuitry. As a supplement to the traditional isolinear circuitry, the bio-neural gel packs act as a nervous system throughout the Intrepid. The bio-neural gel packs allows the Intrepid-class computer core and systems to process information more efficiently, using more instinctive data processing, speed up probability calculations, and cutting down on the amount of crew needed to maintain its systems. The Intrepid also proved as a steep learning curve for the bio-neural systems. While far more robust and durable than traditional circuitry systems, and therefore requiring far less maintenance, they proved to require just as much previously unforeseen medical monitoring as they do engineering monitoring.

Classified officially as a “light cruiser”, the Intrepid boasts a modest array of weaponry in its arsenal. While not necessarily going to stand toe-to-toe with a Romulan warbird, the Intrepid has impressive phaser array coverage with very little blind spots. The 13 phaser arrays are, shared from the Galaxy-class design, of the Type-X variety. However, the Intrepid lacks the vastly superior power supply that the Galaxy affords its main phaser array, putting out only a fraction of the firepower the Galaxy can while at peak operating power. The Intrepid also sports two forward and two aft torpedo launchers, all of which are capable of firing both photon and quantum torpedoes as needed. The launchers can also be configured to fire probes and tricobalt devices if mission priorities require it.

Another area that the Intrepid lacks compared to its larger explorer counterparts is available crew amenities. The Intrepid boasts a crew mess, an adjoining officers mess, two holodecks, a crew lounge, and a gymnasium. The holodecks of the Intrepid were unique as they were the first enhanced generation of holodecks since the implementation of the technology on the Galaxy-class. The Intrepid holodecks were more advanced, more efficient, and far more interactively dynamic.

The Intrepid-class was an astonishing feat of technological marvel that began its development in the midst of the launch of the Galaxy-class platform. As Starfleet pined for larger, more multi-mission starships in lieu of the Constitution-class starships a century before, there were some in Starfleet Command who wanted to bring forward a new line of smaller, faster, less resource-intensive exploration vessels; essentially bringing the Galaxy-class down into a starship with a crew no more than 200. In order to do so, the Starfleet Corps of Engineers would have to bring to life technologies that were only thoughts in the imagination.

The hull design for the Intrepid-class was simple and sleek, but it was the internal mechanisms that took over a decade to develop. When the Intrepid-class launched in the early 2370s it was believed to be a sufficient supplement to Starfleet’s exploratory wing. During the Dominion War, several Intrepid-class starships proved to be invaluable assets because of their incredible speed and extensive sensor suite. But it wasn’t until 2378 when the starship Voyager returned to the Alpha Quadrant after being stranded in the Delta Quadrant for 7 years that Starfleet finally knew it had a robust workhorse exploratory vessel that could withstand the rigors of deep space for extended periods of time. Now, the Intrepid-class can be found mostly on the frontier of Federation space exploring the unknown.