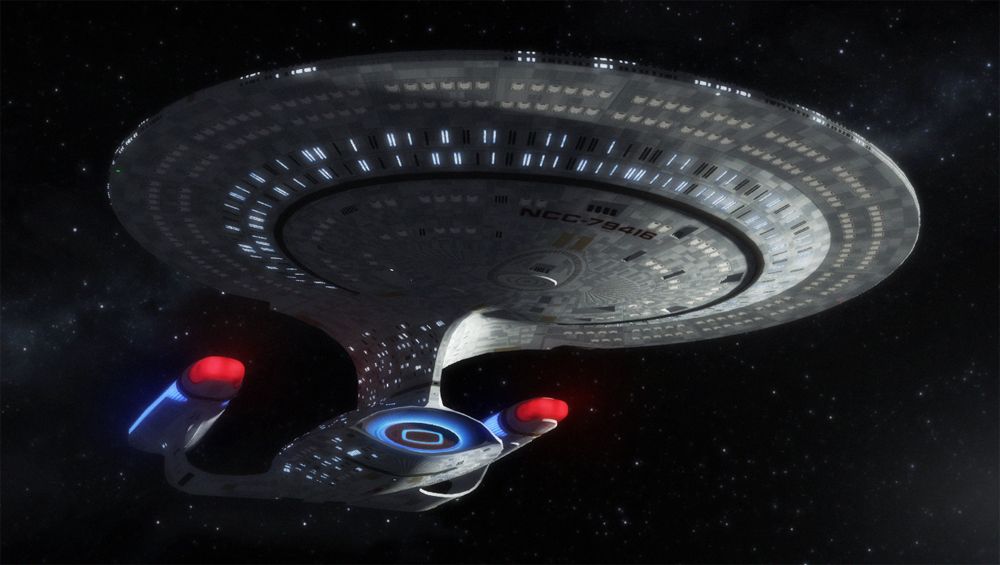 In the year 2343 design began on a new multi-mission starship. The Galaxy Class starship, after a few set backs, would become one of the Federation’s premier explore, diplomatic, and research vessels. She also packs punch in combat.

The Galaxy Class was developed to replace the aging Ambassador and Oberth Class starships as Starfleet’s primary exploration vessel. In fact, many came to regard the requirement as too challenging; the project suffered from numerous delays due to a wide range of design, manufacturing, and construction problems. The first of the class, the USS Galaxy, was launched in 2357 and commissioned in 2362, nearly two decades after initial approval.

The increased internal volume allowed for 800,000 square meters of mission adaptable facilities. This allows the Galaxy Class to support a wide range of ongoing research projects independently of the vessels primary mission. Although not a new idea in Starfleet vessels, the Galaxy Class is unique in the extent to which this is possible. These ships are capable of supporting up to 5,000 mission specialists, while the decentralized nature of the secondary power grids allows laboratories to function effectively even during combat operations.

The three burst fire torpedo tubes are each capable of launching ten photon torpedoes every six seconds, while there are twelve type- X phaser arrays. As with many recent Federation designs, the use of long phaser arrays rather than banks gives the main Phasers of the Galaxy Class a great capability for sustained firing and rapid recharge/cool down time. The Galaxy Class is the first on which all segments of every phaser array are supplied by a separate power system; although this increases the complexity of the system tremendously, it gives the phaser arrays a tremendous survivability in the face of combat damage.
In service the Galaxy Class at first proved exemplary, but by 2371 no less than three of the initial six ships had been lost, one with her entire complement of crew and families. This alarming record led to many changes being introduced during refits of the remaining three vessels, and also to the construction of six new Galaxy Class ships from space frames held in reserve against future need. The unfortunate history of the Galaxy Class vessels combined with the recent escalation’s in tensions within the alpha quadrant has led to all six vessels being subsequently completed, and all are now on active service against the Dominion.

Major changes to the Galaxy Class have included a new more powerful warp core, a redesigned shield system intended to perform far better against phased polaron beam weapons, various changes to the ships computer systems, plus many minor changes to the ships systems. There are currently nine Galaxy Class vessels in service. Production of these vessels continues today. Five Galaxy Class ships took part in the recent operation to retake Deep Space Nine from the Dominion and the class gained a fearsome reputation during the war, operating without loss. At this point further production is expected to be terminated in the next few years in favor of the new Sovereign Class.