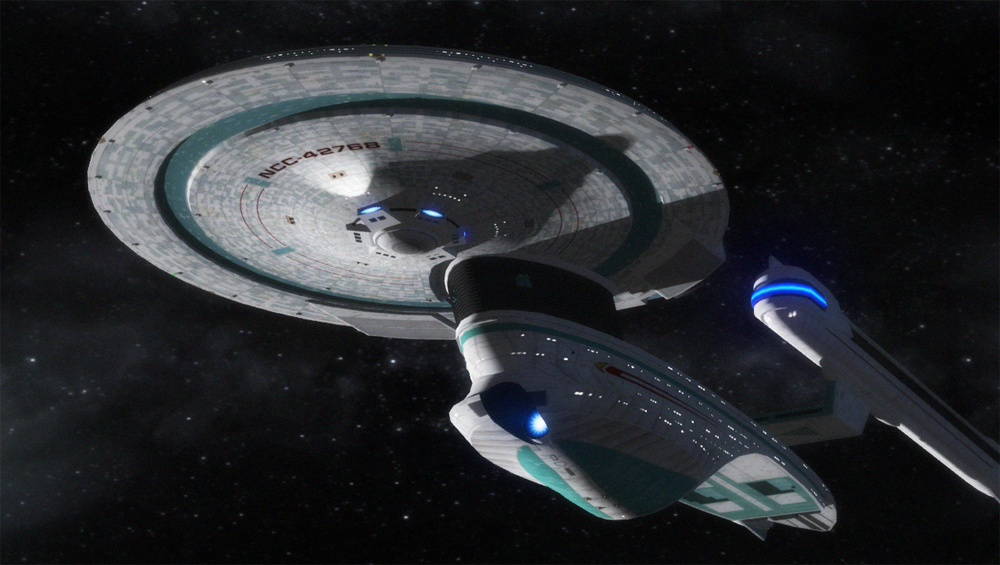 Like any ship class, changes were made to the Excelsior throughout her build program. While most of these were relatively minor and left little outward appearance of change evident, in 2293 a very significant change was authorized for the USS Enterprise NCC-1701-B which was then in the later stages of construction. These included an extra set of impulse engines on the saucer section, flares on the side of the engineering hull, and a minor change in configuration for the warp nacelles. These changes were a result of the recently decommissioned USS Enteprise-A confrontation with the Bird-of-Prey commanded by the conspirator General Chang. The advent of Klingon vessels who could fire while under cloak was understandably alarming to Starfleet planners, as well as the possibility of this technology falling into the hands of the Romulans via Ambassador Nanclus.

Faced with the possibility of enemy craft that could evade the sensors of Starfleet’s best ships, designers at the Advanced Starship Design Bureau hastily made changes to the Excelsior design to help combat this newly perceived threat. The advanced sensor systems that had assisted the Excelsior and Enterprise in their battle against Chang were not part of the standard sensor package on Starfleet ships at that point, and so they were added in to the main sensor array. This would, however, necessitate the forward shift of many other systems of the class’ sensor systems and navigational deflector which resulted in the hull flares that flanked the deflector. Additional impulse engines were also added outboard of the standard main engine systems in the hopes of improving the maneuvering systems of the class in the face of the threat of engagements with larger numbers of smaller, highly maneuverable Klingon attack craft.

Following the successful completion of the Enterprise-B, forty-five of the following ships of the class were completed to the altered design. While a technical success, the alternate configuration was simply one that was created to face a threat that never materialized. Chang’s Bird of Prey ended up being the only ship to be equipped with the experimental cloaking system. It turned out that the system had been developed by several isolated engineers with Chang taking the secrets of the completed system to his grave. The Romulan government also never deployed the system, either because they lacked access or because of its inherent weaknesses. By the time the Treaty of Algeron was signed in 2311 the changing political climate minimized threats from both the Romulans and Klingons. The former had retreated beyond the Neutral Zone into a period of isolationism while relations with the latter had been improving ever since the Khitomer conference and the likelihood of a direct conflict seemed remote.

This new reality would combine with technical changes to spell the end of the variant build program. By 2310, the advanced sensors that the vessels had been outfit with had become part of the standard sensor package on all Starfleet ships. The promised increased maneuverability of the additional impulse engines had never truly lived up to Starfleet’s expectations, and it was becoming increasingly felt that the hull space that was given up for additional impulse reactors and engine systems could be put to better use in order to house advanced scientific equipment and facilities. By 2315, all following Excelsiors were once again built to the original configuration. The altered design have been variously refered to as the “Enteprise-class”, the “long-hull group”, or the “Excelsior refit”. However, Starfleet never held any institutional difference between the long-hull and standard Excelsior configurations, and refits and upgrades have been applied to both groups equally in the intervening years leaving little difference, aside from the obvious cosmetic ones, between the two.