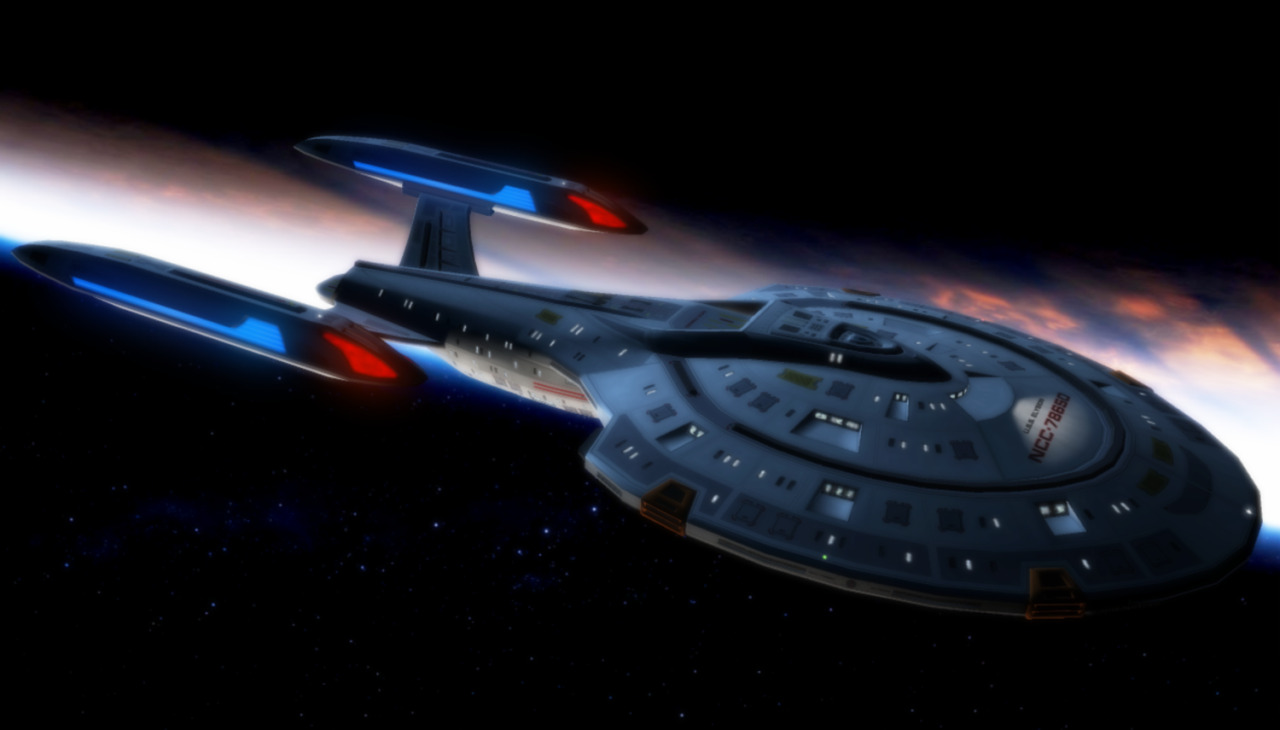 Although from the same design lineage as the Century, the Elysion is much more severely limited in its diplomatic capacity as its larger sister. The Elysion has a secondary purpose of diplomatic duties, but like its scientific abilities, it is limited by its own size. Much like the Intrepid, the Elysion’s size limits it to only specific diplomatic functions which it carries out at a standard above most other Starfleet vessels.

The Elysion-class is the design and engineering culmination of the proven worthiness of the Century-class spaceframe. The Elysion derives much of its design, both internal and external, to Starfleet taking the Century space frame and making it smaller, easier and quicker to build, and more resource-friendly.

Like its larger sister, the Elysion sported the latest in technology including the second generation of bio-neural circuitry first fielded on the Century, holographic projectors throughout the entirety of the ship, ablative armor, the vetted class 9 warp drive originated by the Intrepid. Directly derived from the Century, Elysion also includes the highly advanced automation systems for many of the systems of the ship which required less crew to control them, and an equally advanced vocal command interface that would allow a single person to command the ship if necessary.

The Elysion is officially classified as a light cruiser, and is armed accordingly. The ship boasts an impressive tactical loadout, but much like all its other capabilities is limited by its size. The Type-XII phaser arrays give nearly full coverage of the ship’s arcs but are severely limited by the ship’s power generation capabilities limiting it to only a fraction of the bigger Century’s Type-XII arrays. The Elysion also uses the same burst fire launchers as the Century, but is limited by its overall payload. Overall, the Elysion could tactically be more comparable to the Intrepid, but is more than capable to hang around in a fight than its “light cruiser” designation would indicate.

Unlike the oft compared Intrepid, the Elysion allows for more comfort aboard ship mostly due to its highly automated systems. This leaves less need for unused crew quarters and more room for crew comforts.

The ship sports the standard crewman-officer-senior officer quarters layout that any Starfleet vessel does. However, it boasts four state-of-the-art holodecks, a crew lounge on par with the Galaxy-class Ten Forward Lounge, a comprehensive gym facility, and a phaser range. The ship even boasts a modest arboretum; although the arboretum is just as much for research purposes as it is for crew amenity.

Although the Elysion is derived directly from the Century-class design, its inception came years after the Century launched as a proven platform. As Starfleet Command was shifting more steadily away from the wartime philosophy that dominated the time of the Dominion and Borg threat, the desire for more explorers was at hand. The Century was birthed from that desire but even with its highly automated systems and much lower crew count than ships of similar size, it was still resource-intensive as a capital ship explorer. Starfleet desired something to share the niche side-by-side with the Intrepid.

The mandate was simple: shrink the Century platform into something smaller, easier to build, and more resource-efficient. However, that proved more difficult than originally anticipated, forcing the designers to make slight changes in the hull configuration. The Elysion design ended up being relatively the same, but proportionally slightly different. The unique deflector on the Century was also unable to translate to the Elysion, causing a visual difference. Once the prototype was completed, however, the Elysion was easily in spirit the smaller sister to the Century. Walking the corridors of the Elysion felt like you were in the Century and her capabilities matched. The first five Elysion-class starships to be built were all tasked with frontier exploration, and are expected to be common sights on the frontier supporting their much larger sister class for decades to come.