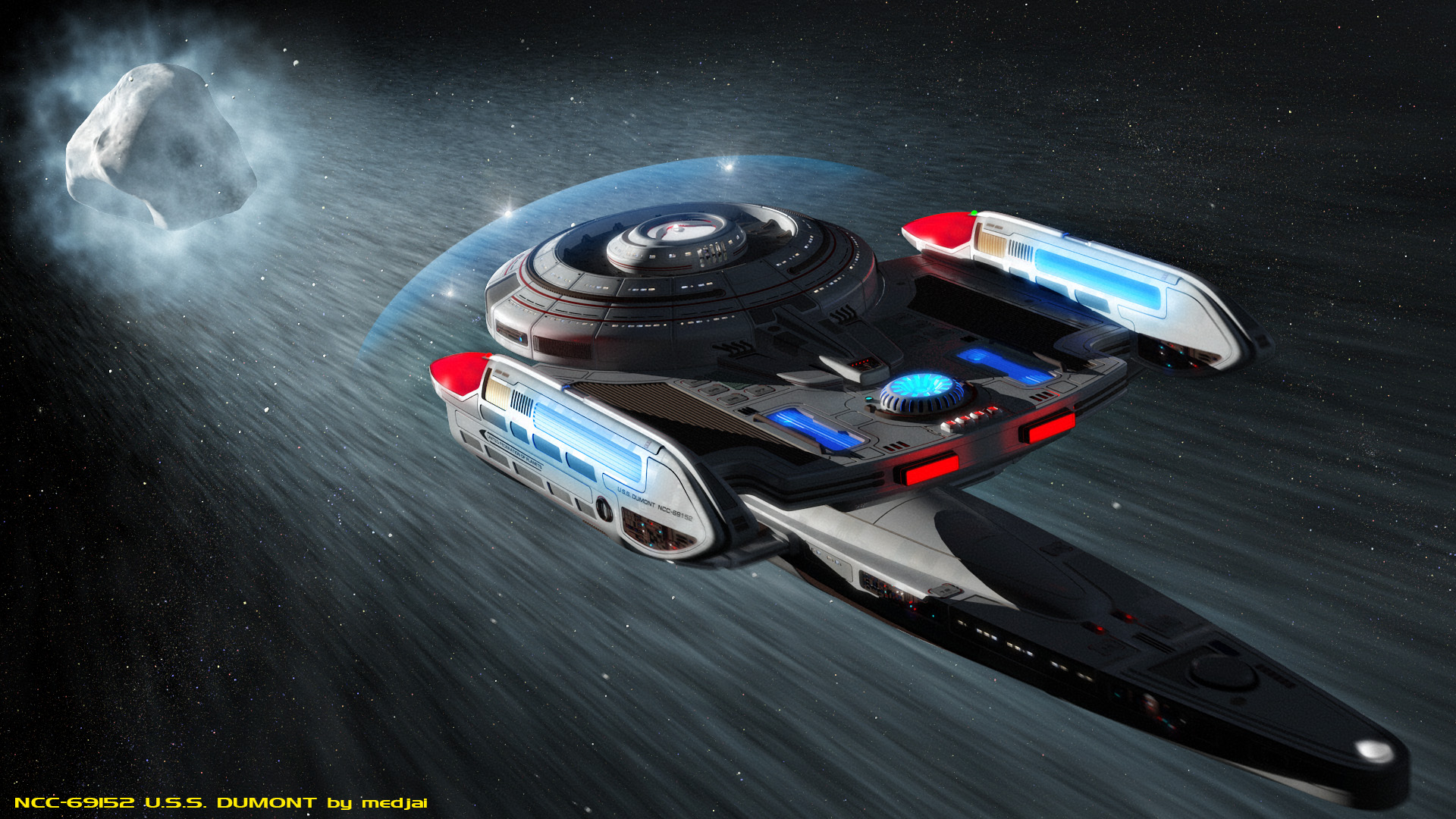 In the wake of the Hobus Incident, the Nova and Rhode Island starship classes were forced to be sent further and further out into the reaches of the Federation, providing much needed support for beleaguered task forces and starbases along the Romulan and Klingon borders.

The Dumont class Project was considered a “stop loss” option for this. The decision was slated to begin massively upgrading and updating the current Oberth Class ships within the fleet, in order to replace the short range support and science vessels currently assigned to the Federation’s interior.

Work began on the frame of the USS Dumont, one of the newer Oberth class starships, in early 2387, only months after the Hobus Incident. The Advanced Starfleet Design Bureau quickly came to the realization that many of these vessels were simply too old and lacked the infrastructure to support the updated systems. Rather than shelve the project, though, the ASDB decided that it still held merit. They would take the original design specifications (and ease of construction) of the older Oberth class, and update what was necessary in order to make it a capable ship in the current fleet.

They would be able to build out the ships to their own specifications, and much like the Oberth class, they would be able to build them quickly, and with minimal resources. Much like the Oberth class, 8 Dumont class vessels could be built out using the same resources it would take to build a single Sovereign class vessel. Moreover, they could be built, outfitted, and commissioned in four to six months. Also like its predecessor, the Dumont would be able to be built or repaired by any starbase capable of outfitting shuttlecraft, owing to the relatively small size of the ship.

The ship would, as had its predecessor, perform most well in the area of sciences. With adaptable labs, and a high level sensor suite, the ship would be tailored specifically to science based missions. In any of the labs (and indeed most of the rooms throughout the ship), consoles and various equipment could be slid in and out of the bulkheads and decks, making much of the ship adaptable to serve any need the crew would be able to find.

The class was afforded a small shuttlebay, with a single shuttlepod present (typically type 10 or type 18.) As most of the interior was to be used for science labs and crew living areas, it was determined that the space for small craft would be sacrificed, in order to maintain the comfort of the crew.

The ship would have a single holosuite aboard, and officers of Lt(jg) and higher rank would be afforded their own quarters. Officers rated Lt and lower would share quarters with one other officer, and enlisted and non-commissioned officers would share “hot-bunk” quarters with two others.

Another design change was to be found in the Secondary hull, or “Pontoon” as the engineers had come to call it. Previously, this area of the ship had been largely unmanned. It was decided that with the advent of a small pylon to connect the two portions of the craft together, more cargo and workspaces could be added to these lower decks, and as such a high speed turbolift was added, which would take passengers from deck 4 to deck 5 only. No other turbolifts would be added to the vessel, and indeed the decks would be connected via stairwells to the fore and aft.

In December of 2387, the first four space-frames of the new Dumont class were commissioned. The class’ namesake, the USS Dumont, was sent out for trials first, and performed admirably in all tests.

The ship was agile, but lacked a decent top speed, owing to the need for an easy to build, mostly automated warp core and engineering system. The engines could be briefly “overclocked,” but not for any long amount of time, without causing damage to the coils.

After a week of field testing, the class was considered a success, and all four vessels were formally commissioned, and deployed to short-range scientific duties as well as short-range support duties.

The Dumont class is unique in that a set number of vessels was not requisitioned at the class’ onset. Rather, should the need arise for a short range science cutter or short range support vessel, one could be reasonably commissioned from any of the starbases throughout the Federation. In the four months it would take to build out the ship, a crew could be assembled and transported to the departing point.

Various civilian entities have also been in talks with Starfleet and the ASDB to commission civilian versions of the Dumont class, making it, in every sense, a true successor to the Oberth class.