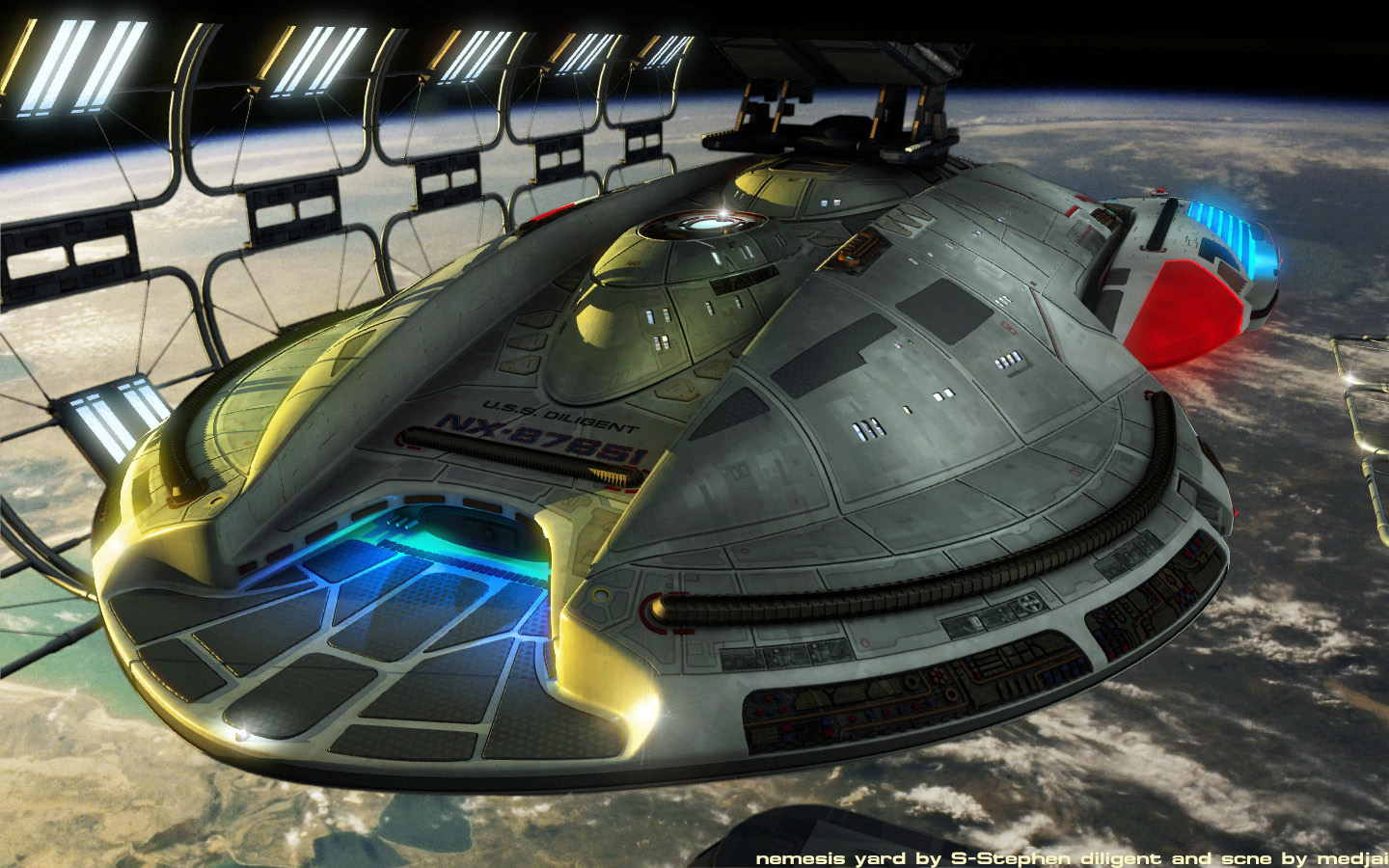 Developed after the Defiant-class had proven its quality, the Diligent class has demonstrated its success as the larger cousin. A short-range vessel designed primarily for combat, the Diligent still boasts further diplomatic and scientific capabilities. This makes her a flexible vessel for short-range missions, from escort and patrol duties, to reconnaissance even for exploratory or diplomatic assignments.

With only one dedicated science laboratory, the Diligent lacks the resources for thorough or versatile exploratory missions. The Diligent’s limits are to conduct an initial survey and analysis to ascertain the value of sending a more dedicated vessel. It is most likely to be given such a mission due to its convenience as a first-response vessel, or if there exist tactical concerns.

The laboratory itself is of a versatile design to allow a refit at starbase to suit any anticipated mission. It lacks the crew numbers, however, to support many scientific specialists, especially Academy-educated or commissioned science officers. Due to its combat applications, the Diligent does boast a robust sensor array, though it is particularly lacking when it comes to orbital scans or multi-spectrum analyses, and the ship contains only a limited number of simple probes. Overall, the Diligent by design under-performs in scientific duties compared to other Starfleet ships of its size.

With two sets of VIP quarters and a conference lounge, the Diligent is one of the smaller vessels capable of undertaking diplomatic duties between multiple parties. It also has access to amenities such as a gym, a galley, and a holodeck to provide greater comfort to such visitors. This has made her suitable for second or third contact missions, or to play a role mediating disputes with third parties.

However, the arrival of a Diligent is seen as a sign not only that Starfleet is prepared to defend itself, but that Starfleet chose to not send a more suitable diplomatic vessel, which can colour any negotiations. It is most commonly assigned when there is a need for swift transit or some threat is anticipated.

With a high top speed and sophisticated bio-neural interface, the Diligent is a success of efficiency as much as technology. Its innovations were developed from previous starships; the warp coils are based on a scaled-down Sovereign platform, while the warp core is a dilithium swirl chamber, based off the Intrepid class design, which allows for excellent power and speed.

The warp engines are mounted on variable orientation pylons. When not at warp the nacelles are held close to the ship, minimizing the ship’s target profile from the front and rear. This affords the nacelles some amount of protection since they are less exposed. Shortly before going to warp, the nacelles are deployed to help create a warp field that does not harm subspace, similar to the way an Intrepid Class vessel’s nacelles pivot upwards prior to engaging warp speeds.

It is in tactical engagements that the Diligent truly shines, though in development and performance it is often compared to the Defiant-class. It sacrifices the heavy pulse phaser cannons and greater maneuverability for a high top speed, and relies upon complete weapons arc coverage, hence the large number of phaser arrays incorporated into the design. In times of anticipated conflict, the probes may be replaced with additional quantum and photon torpedoes.

Overall, the Diligent is fast enough and well-enough armed and armoured to face off against a range of enemies, especially under the command of an experienced tactician. This speed and versatility has served it well in both solo engagements and as a part of fleets, where its rapid deployment capabilities have been used to out-manoeuvre enemies of larger, slower vessels.

For its size, the Diligent provides a fairly pleasant shipboard life. Officers ranked Lieutenant Junior Grade and above have their own staterooms; Ensigns and Chief Petty Officers share bunked quarters with one other person, while petty officers and below share quarters with three other crew. The starship is equipped with two holosuites, a gym, and a mess hall. While this provides comfort and amenities, the mess hall usually lacks the character of the dedicated lounge on larger starships, and official use of holosuites can limit access for recreation.

Because a Diligent would be unsuitable for any deep space assignments lasting longer than a year, more often it regularly comes into contact with starbases and Federation worlds, if it is not outright assigned to report regularly to a specific station. This, and the limited living space for most of the crew, means a Diligent is usually not treated as a long-term home by most personnel. There is no room aboard for family, and the limited privacy tends to keep romantic fraternisation amongst the crew low and casual.

However, the confined living space and often dangerous assignments of the Diligent can lead to very close bonds among the crew. It is inevitable that a Diligent crew together for some time will all know each other at least by face, and those working together have likely accumulated a wealth of intense experiences as well as the connections from living in close proximity.

By 2376 the Dominion War was over and Starfleet was faced with the herculean task of rebuilding the fleet. While classes like the Akira, Intrepid, Saber, Defiant and Steamrunner were being produced at record rates to bolster Starfleet’s numbers, it was decided that new designs were also needed to address gaps in functionality made apparent during the war.

The Defiant-class design, for instance, demonstrated vividly the difference between a vessel designed primarily for exploration and one designed primarily for combat. While the war was over and diplomatic and scientific discovery needed to resume, Command decided it was not about to grow lax and so-called for a vessel with a compact design and significant combat capabilities, like the Defiant, that also had the capacity to execute scientific, diplomatic and explorative missions on a small scale, when larger explorers were not required.

The Diligent class was the resulting proposal. Equipped with the latest technology, including bio-neural circuitry, new sensor suites and propulsion systems, at the expense of being somewhat larger, it represented an overall improvement over the smaller Defiant-class in terms of non-combat mission interoperability, while still maintaining nearly the same combat potential.