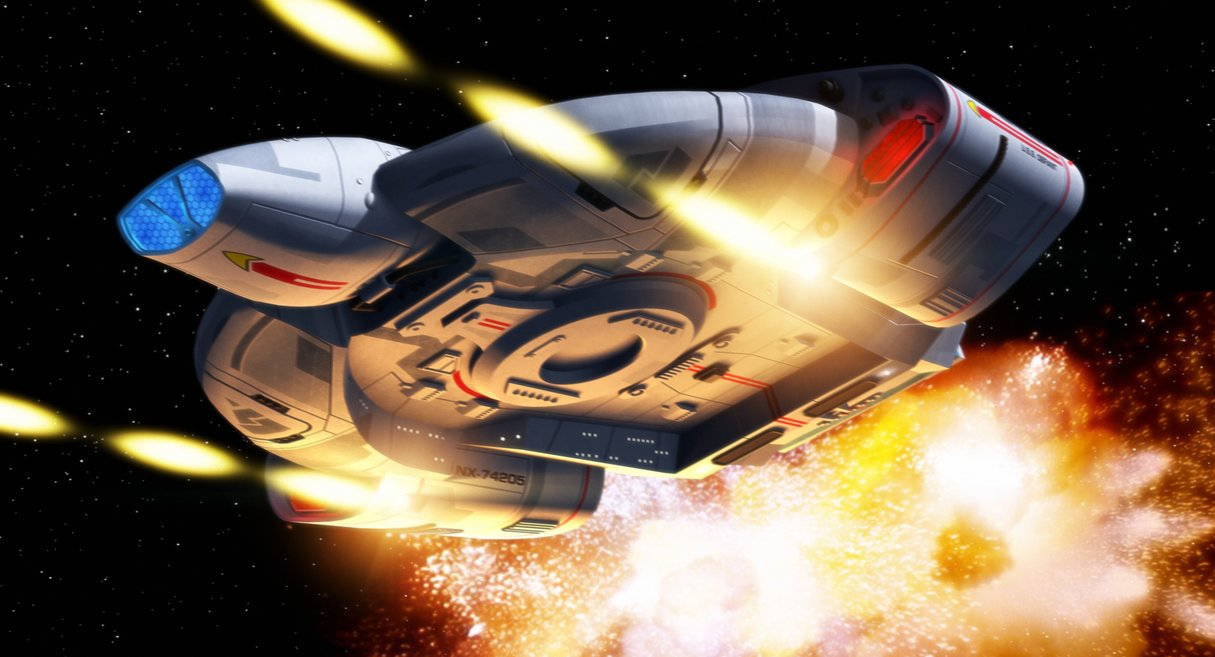 The Defiant-class starship was developed as the first official ship to combat the Borg Collective incursions into the Alpha Quadrant. Originally, the design was unstable and as the Borg threat diminished, the prototype was shelved until the beginning of the conflict with the Dominion in 2371.

The Defiant-class has a surprisingly capable sensor suite for a ship meant for combat; this is because the sensors on the Defiant are tuned in for defensive operations and intelligence gathering. The Defiant is not outfitted for the ability to complete highly detailed, extended scanning, and analysis tasks, but is capable of performing most standard scientific query.

Due to the size of the Defiant, the ship is also severely limited in its ability to perform exploration duties. The ship is incapable of any type of long-term, deep-space exploration assignment without the ability to regularly resupply.

The Defiant-class lacks any real semblance of diplomatic abilities. It lacks any facilities for ambassadors, is unable to hold any diplomatic functions, and has no special quarters for dignitaries. The limits of its diplomatic ability is ferrying around diplomats in an emergency situation.

Most of the Defiant’s diplomatic capabilities are actually in the ship itself; its raw firepower tends to make others think twice.

The Defiant-class is the first time in Starfleet history that a ship was built from the ground up with the idea of combat in mind. It was the first ship to offer the raw power of the Type-XII pulse phaser cannons, has an ablative armor matrix built into its hull, and was the first ship to field the new quantum torpedoes.

The design elements of the Defiant are unlike any Starfleet vessel before it. However, the small, simplistic design allowed exactly what Starfleet Command desired: an easily and quickly buildable ship to combat the Borg. Its size also gives it a huge advantage in maneuverability as the rest of the Alpha and Beta Quadrant empires desire larger and larger vessels.

While Starfleet officially doesn’t sanction warships or battleships, the Defiant was given the moniker of an “escort”. The combat systems of the Defiant, however, are undoubtedly those of a warship designed by a Starfleet desperate for an answer against the largest threat they had ever faced.

The ship boasts most of its raw firepower by running a plasma conduit through the primary phaser coupling, almost doubling the phaser power. The class-7 warp drive powers the undersized ship so much so that initially the ship almost shook itself apart at full power. Many of these flaws were eventually solved by the crew of the USS Defiant and projected forward to the full production of the class.

Defiant-class starships lack any sort of recreational facilities, and the only place for informal gathering is the cramped mess hall area. The ship lacks holodecks of any sort and only the captain gets his own crew cabin. The rest of the crew quarters are separated into bunks with each crew sharing with at least one roommate.

The ship’s medical facilities are equally spartan, equating to, at best, an emergency field hospital. There are two science and medical labs on board that are more specifically suited to field testing and investigations rather than large scale scientific operations.

Life on the Defiant is boiled down to the word spartan, but it might also be the most efficient ship in all of Starfleet for its specific mission profile. No space is wasted.

During the course of the 2360s the Federation had seen it’s fair share of increasing threats directly to the safety of its core territories; the reemergence of the Romulan Star Empire, disastrous first contact and subsequent hostilities with the Borg Collective and growing threats as a result of increased exploration abroad. After the extreme loss of life at the Battle of Wolf 359 Starfleet insisted that it was in need, for the first time in its history, of a dedicated tactical warship. Starfleet tasked the engineers at Utopia Planitia Fleet Yards with designing such a vessel, which would be small and maneuverable, with Starfleet’s latest defensive and offensive tactical systems.

In 2366, the engineering crew drafted a design that incorporated many new experimental technologies. The Defiant-class was quickly shaping up into being one of the most powerful designs Starfleet had ever conceived, especially for a ship of its size, but suffered in other areas of design. The Defiant only had limited scientific capabilities, barely any medical facilities other than for battle triage and the crew accommodations were spartan at best. Engineers decided that with the limited nature of the Defiant’s mission and role design that those problems wouldn’t be critical flaws. The space frame and hull for the prototype, USS Defiant NX-74205, was laid down after over a year of design and began construction in 2368. Commander Benjamin Sisko, a veteran of the Borg attack of Wolf 359 a year earlier, was made the project lead as construction began. Construction took a little under four months and the shakedown cruise began. Some design flaws soon became obvious, including the Defiant’s inherent ability to nearly tear itself apart due to overpowered engines for a ship of its size.

Due to the critical flaw in the ship’s engines and the apparent subsiding of the Borg threat the USS Defiant was put into dry dock storage until engineers could figure out how, if at all, they could rework the ship’s engines. In 2371 the Defiant was pulled out of storage at the request of its former project lead, Commander Sisko, who was now commanding space station Deep Space 9. The need for a ship to help combat the growing threat of the Dominion in the Gamma Quadrant required the ship’s flaws to be refitted and repaired in the field. Throughout the coming months chief engineer Miles O’Brien and Sisko were able to modify the ship’s main pulse phaser systems and its engines to allow for free flow of power throughout the ship and mostly eliminate the problem of the ship tearing itself apart, although if pushed too far the ship could still pose a risk to itself.

After the successful testing of the USS Defiant in the field under the command of Sisko and the growing threat of the Dominion, the class was scheduled to go into full production. During the conflict with the Dominion, nearly 50 of the class were able to be launched before the Romulans joined the war and it subsequently ended. At that time the remaining ships in production were either completed or scrapped for other exploration-designed ships, depending on how far into construction they were. With the Federation returning Starfleet’s efforts to that of exploration and discovery, the Defiant-class found itself going from the front lines as an “escort” to finding itself assigned to frontier outposts and high-risk targets. Still, in limited numbers, the Defiant-class starships that are active, few and far between, are considered jewels in combat and are reserved for the possibility of war ever breaking out again and to combat the ever-looming Borg threat.