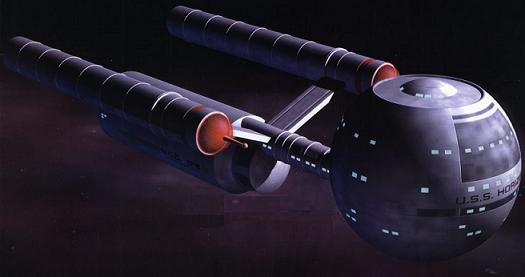 The design of the Daedalus Class was composed of a spherical primary hull and cylindrical secondary hull. These two hulls are connected by a cylindrical neck that is two decks in height and where this neck attaches to the secondary hull two nacelle pylons are also attached. These pylons extend upwards at forty-five degrees and support the ships warp nacelles which are located to either side of the ship at a height just above the mid deck of the primary hull.

To accomplish its mission as a vessel of exploration Daedalus Class ships are equipped with a full complement of science and medical labs. These research facilities are complemented by an extensive suite of sensor systems with the majority of these housed in two sensor domes. One of these domes are located at the Dorsal most point of the primary hull an the other is located at the ventral most point of the same hull.