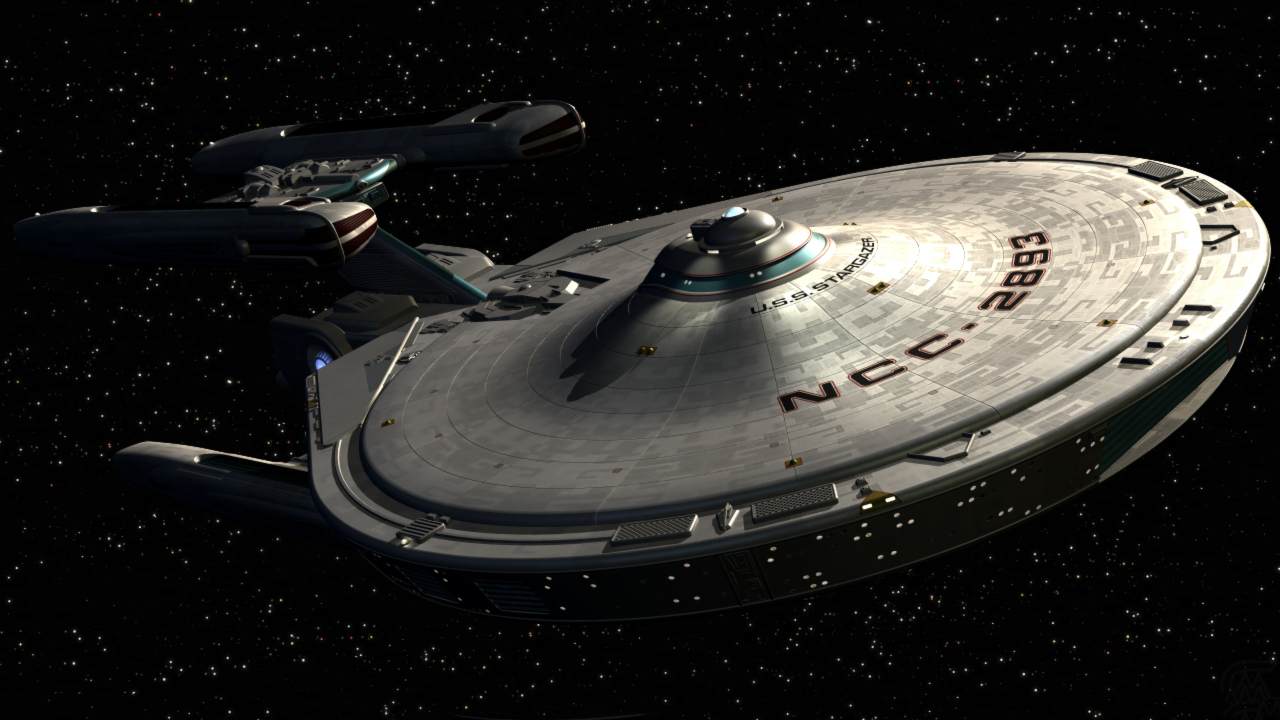 The Constellation class was fielded during the 2280’s as a modern counterpart to the Constitution class. Like the Constitution Class, the Constellation’s requirements, issued in 2272, called for a vessel capable of long duration exploratory, scientific and diplomatic missions. The new ship was to be able to perform this role over the longer ranges called for now that the Federation had acquired new members beyond its previous borders. In addition, the Constellations combat capability was to put it ahead of any current or projected vessel in the Romulan and Klingon Empires.

The Constellation’s configuration marked a substantial change in Starfleet design practice of the time. During the era, Starfleet had experienced significant problems generating and controlling the large scale structural integrity fields required for heavy cruiser class ships. The solution adopted was to build smaller vessels within one single hull unit, while larger vessels required two hull units fitted with independent SIF’s The Constitution class is a classic example of this philosophy. With the Constellation it was thought that SIF technology had advanced to the point where a Heavy Cruiser class could be fielded within a single hull. This would allow much duplication to be avoided, freeing up space for extra equipment and improving the efficiency of the design. In addition to their unusual hulls, the Constellations employed four warp nacelles instead of the usual two, the first Federation starship to try this variation. It was thought that this would give the Constellation class a significant increase in speed and maneuverability across the warp flight envelope and improve the fuel efficiency at medium cruise speeds by some 15%.

In retrospect, it can be seen that the Constellation designers attempted to accomplish too much in one step. Severe problems were encountered with the development of the new warp core and several vessels experienced a variety of failures with this system.

After a great deal of time and effort it was decided that the warp core of the Constellation class were simply not up to the job of producing the power required. It was learned that the more nacelles required more power, inspite of the speed and acceleration advantages. Starfleet was denied the resources required to produce a new design and refit the fleet, so instead a “stopgap” option was chosen, the power output of these ships was restricted by limiter software in the engineering systems.

Unfortunately while it solved the near constant emergencies, this measure also robbed the Constellation class of some of their most important advances. They were seriously under powered for their size, a factor which adversely affected almost every aspect of their operation. Despite this Starfleet was committed to the production of these ships on a large scale. This went ahead as scheduled, and 46 Constellation class ships were ordered, which was later boosted to an even 50.

Over the years many attempts were made to rectify the problems with the Constellation class, and eventually some success was achieved. Between 2300 and 2310 six units received a new upgraded warp core which brought them close to their original designed power output. Other units of the fleet received new control software which allowed their power to be safely boosted by some 15% on average. However, by this time the class was some twenty years old and had fallen well behind the leading edge of technology. It was decided that an extensive refit of the Constellations would not be an efficient use of resources, so most of these ships were forced to soldier on with their problems. With the advent of newer designs in the 2330’s some of these vessels were retired altogether, while others were assigned border patrol duties. In the 2370s, the 18 remaining in service were finally upgraded, giving them the power they needed. While the class is nearing it’s 100 birthday, this upgrade assures the remaining ships will be active and useful for at least another decade.

The Constellations have had a generally undistinguished career, with some notable exceptions, one being the USS Stargazer. The first vessel commanded by Captain Jean Luc Picard, the Stargazer was the first vessel in Starfleet to perform the “Picard Maneuver” which it used to destroy an attacking craft now known to be a Ferengi Marauder. The Stargazer was heavily damaged in the engagement and was abandoned and believed destroyed. In 2364 the ship was recovered and now resides in the Fleet Museum. The last Constellation ship was retired from service in 2375