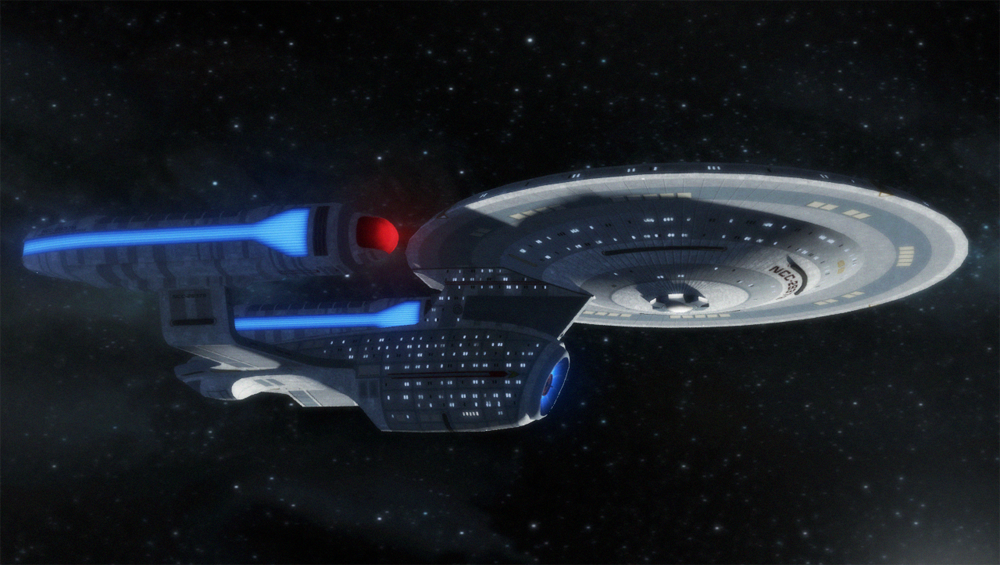 Ambassador-class heavy cruisers are venerable workhorses for Starfleet. Originally designated as explorers, they have since been pulled back from most frontline operations and serve capably as diplomatic, scientific, and tactical platforms for duties within Federation space. For their time, they were revolutionary, and they still remain quite powerful for their size.

The Ambassador-class starship was intended to be as revolutionary to the exploration of space as the Constitution was in her time; an order of magnitude more capable than the Excelsior-class ships serving as Starfleet’s premiere exploratory vessels in the 2330s. Indeed, this class was the first to be designated as an explorer rather than as a cruiser, given that she was designed to undertake true five-year unsupported missions outside of Federation space.

By the early 2370s, she had been reclassified as a heavy cruiser but retained impressive scientific and exploratory capabilities that have continued to make her a desirable command. The class contained the most powerful spaceborne sensor arrays of their time, and her eighteen modular sensor pallets continue to be able to use the latest scientific scanner equipment. Twenty-eight large dedicated laboratory facilities are included in the ship, along with facilities to convert three of the cargo bays to hold extra scientific equipment if necessary. This gave the Ambassador an estimated 325% increase in research capabilities over an Excelsior, and she remains significantly more capable than light cruisers and smaller, more modern-exploratory vessels.

With more and more of these vessels having been pulled off of front-line duties in the 2380s and later, some of them have been retrofitted with even more impressive scientific suites in place of crew quarters or engineering support areas, to allow them to perform in-depth surveys of planetary systems with much greater speed than purpose-built surveyors, which tend to be a fraction of the size of an Ambassador.

As her name would suggest, an Ambassador-class starship has long been one of the most capable diplomatic platforms in Starfleet and she is still the ship of choice for most diplomatic missions in and near Federation space when a Galaxy or Odyssey-class ship is not available. She was one of the first classes to include extensive support for variable atmosphere and gravity accommodations to assist in diplomatic dealings with lifeforms who are not from M-class environments. A full 50% of her high-quality guest quarters and all of her elaborate conference facilities were originally able of being quickly configured for K, L, O, or P-class environments, and this capability was extended in the 2370s to include high-temperature environments. Most vessels of this type have also been retrofitted with holographic projectors either in the whole ship or in diplomatic areas to allow for quick reconfiguration of facilities for different negotiations.

An Ambassador-class ship is capable of hosting multi-party talks in great comfort, while also being a suitably-powerful ship to not need an escort when going into hostile areas.

Ambassador-class ships were among the fastest vessels of their time, retaining speed records that weren’t broken until the Galaxy-class was launched in the late 2350s. These vessels were the first to use the second generation of the semi-toroid warp coils that became standard after the launch of the Excelsior-class three decades earlier. Their large warp cores provided ample power for her scientific and tactical systems as well, and they boast large engineering crews to keep everything operating effectively.

An Ambassador-class ship also maintains relatively large cargo bays and auxiliary craft facilities, alongside industrial replicators and other systems that make her a very effective vessel for humanitarian missions or construction projects. Given her comfortable accommodations and facilities, she is also effective as a tender for frigates and escorts.

The Type-IX phaser array was developed for use aboard the Ambassador-class. This measure greatly increased the ability of the Ambassador Class to fire sustained bursts, and greatly reduced the recharge and cool down times. The use of an independent power system for every group of ten emitter segments in the array triples the survivability of the array compared to a ball turret, while there are also benefits to the reaction time, greater control of thermal effects, field halos and target impact. Overall the phaser arrays of the Ambassador are over 50% more

effective than the Type-VIII ball turrets found aboard -class ships. Torpedo coverage is fired by a single burst-fire torpedo tube forward and another aft. These ships generally do not carry quantum torpedoes, but they are able to use them. Ambassador-class ships were updated with Type-X phaser arrays in the 2370s for the Dominion War.

An Ambassador-class ship is still a force to be reckoned with, even seventy years after their initial launch. They had a much higher survivability rate during the Dominion War than the Excelsior-class did, and continue to be used for routine patrols of the core sector. They do lag behind newer ships in maneuverability and overall power, but most pirates and raiders would think twice about engaging one without support.

As with many designs that were once launched as flagships, the Ambassador-class is now a reliable workhorse for the Federation. Crews aboard these ships tend to enjoy their assignment, as the class has been retrofitted with most of the amenities you would find aboard newer explorers, such as holodecks, arboretums, and lounges, as well as comfortable crew quarters. Captains assigned to these vessels tend to be relatively junior, as more experienced captains are generally given assignments further away from Federation space, but a number of them are commanded by diplomatic or scientific veterans.

More and more of these vessels are being retired, but they are very popular with their crews, who often consider it an honor to keep these venerable ships going, which leads to a mix of officers and crew who have refused transfers to newer ships and very junior staff who were posted to them as a first assignment. Like the Galaxy-class, they can accommodate civilian scientists.

Initially envisioned as early as 2300, the Ambassador-class was designed as not only the next greatest exploratory ship for Starfleet but also as the first of an entirely new classification of starship: explorer, as opposed to a mere heavy cruiser. Development was done at a relatively slow pace, given that the Federation was in a sustained period of peace and the Excelsior-class was performing above expectations. Starfleet wanted a design that would introduce as many revolutionary systems as her predecessor had, which led to a long prototyping period with other less-capable ships, such as the Renaissance-class light cruiser and the Freedom-class frigate. These technologies included the next generation in warp coils, phasers, shields, and scientific systems, as well as diplomatic facilities that would make the Ambassador a powerful symbol of the Federation’s values.

Construction on Ambassador, Surak (renamed Enterprise before launch, while the name Surak was transferred to a second-run vessel of the same class), and Zheng He began in 2323 at Utopia Planitia Fleet Yards. Ambassador was launched in 2329, followed by her sister ships in 2332 and 2333, respectively. Despite retaining a crew size of 750, they required nearly twice the time and twice the resources of an Excelsior-class starship, while only giving approximately a 50% improvement in overall capabilities. Though they were markedly better at scientific and diplomatic missions, they were too expensive to replace the Excelsior in her role as a capable multi-mission platform, and both classes continued to be produced alongside one another until Excelsior and Ambassador were replaced by the Nebula-class in 2355 and the Galaxy-class in 2358, respectively.

During her production run, the Ambassador-class was generally built at a rate of two units per year, with 75 of the class built in total. This made them rare compared to the Excelsior-class which was built in the hundreds and they were generally reserved for high-status assignments. They proved popular in service to both their crews and to the admiralty, though they were eclipsed by the Galaxy-class which was substantially more powerful and useful in every respect.

They were generally a rare sight within the Federation for the first thirty years of their lifespans, as they were sent on long-range missions or reserved to put out diplomatic brushfires, but they gradually became more and more common within the core as they were supplanted. One was lost at the Battle of Wolf 359, and a handful were destroyed during the Dominion War, but they proved to be substantially tougher than the Excelsior-class thanks to their more powerful shields, something that was simply less important to the Federation during their initial production run.

Currently, Ambassador-class ships have been reclassified as heavy cruisers and see service in most areas of the Federation, remaining a rare but welcome sight. They have received regular refits to keep them up to modern standards. A few of them have received more specialized refits either for scientific, engineering, or diplomatic duties, though most of them remain capable multi-mission vessels. Starfleet expects them to be in service until at least 2425.