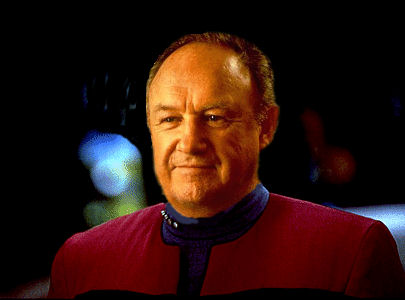 With the incursion of the Gorn, Leslie was tapped to become the Executive Officer of TF93 and the Commander, Federation Forces (COMFEDFOR) for the Gorn Theater. He is currently stationed at HQ TF93, Providence Fleet Yards.

Strengths:
Leadership, connecting with people, and getting his way.

Ambitions:
A bit of a war hawk, Ramsey is happy to command.

History:
Leslie Allen Ramsey was born in 2345 to Frank, a Starfleet Operations Officer, and Mary Anne Babineaux, an Attorney, in quaint Mobile, Alabama. The family moved to Mississippi when Leslie was starting high school. He was captain of the Basketball Team in High School also. After graduating, Leslie decided to go straight to Starfleet Academy, instead of going to a private college so he could blaze his own career like other family members.

After the Academy, Leslie began his career as an eager Ensign aboard the USS Constitution, the third ship to bear the name. When he was promoted, he was placed in the USS Liberty’s Operations Department where he learned various department functions. During a battle, the Chief Security/Tactical Officer became incapacitated and he stepped into the role. The CO recognized Ramsey’s skills and promoted him to Chief Security/Tactical Officer.

Leslie had his first chance of leadership in Starfleet when he became Executive Officer aboard the USS Lafayette. He continued to serve in leadership positions until he was given his own command, the USS Mississippi.

With the incursion of the Gorn, Leslie was tapped to become the Executive Officer of TF93 and the Commander, Federation Forces (COMFEDFOR) for the Gorn Theater.