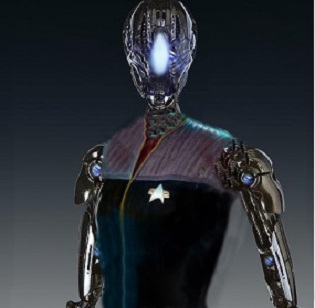 Nobody has physically seen Calida and lived to tell the tale. She is an electromagnetic non-corporeal being. While onboard Starfleet vessels, Calida inhabits a mechanical mobile frame that is roughly humanoid in appearance. Within her quarters, she often transfers to a protective carrier pod whose dimensions are approximately 1m x 1/2m x 1/2m. Calida has a transcendental perspective which is not given to excesses whether positive or negative, though her wry sense of humor never fully leaves even in the worst of circumstances. Baser lifeforms may wrongly interpret her as mercurial.

Calida emerged to sentience over long ago in the sacred and ancient Visalayan breeding grounds on the Medusan homeworld of Xi Hydrae IV. Much of her past remains a mystery along with the history and culture of her species.

Most of her Starfleet career was at Starbase 12 where she oversaw and predicted various astronomical and military events in and around the Romulan Neutral Zone. Once war broke out with the Dominion, Calida joined the newly commissioned hospital ship USS Huang Feihong as a diplomat and reserve helmsman. She pulled the ship out of a few tricky situations during the war, and gained a love for navigation and piloting as a result. Once the war ended, she remained aboard as a reserve flight control officer in her capacity as a diplomat.

When the Odyssey received its commission to explore the Romulan region and beyond, Calida pulled every string afforded by her long career in Starfleet to place herself at its helm.