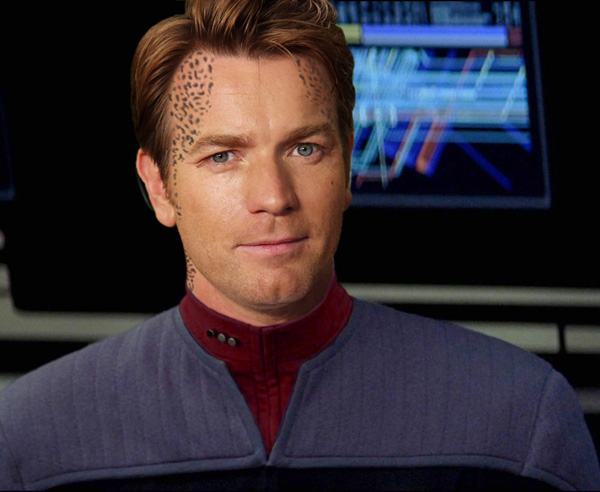 A bit shy at first approach, Temerant Lochees was studious, methodical, and a bit of a perfectionist. Inspired by his father’s experiences as a joined Trill, he petitioned the Trill Symbiosis Commission for joining. After a rigorous process, he was finally selected, but had to wait four years before the Bast symbiont became available. Joining gave him deeper wisdom, aplomb and self-confidence, and broadened his artistic interests.

Physical Description
Tall and slim, Temerant has short brown hair and hazel eyes, with a rounded jaw. Spots, characteristic of the Trill, run down the sides of his face and body.

Strengths & Weaknesses: Self-confident and sure of himself, he excels at multi-tasking and is very efficient at his job.
Hobbies & Interests: He is a good cook, having learned more than the basics from his previous Hosts, as well as from his sister, who is a top chef.
He loves running, and frequently goes on 20k runs on the Holodeck.
He is a disciple of the Lethani, a Trill martial arts technique.

Biography
Temerant (host) is a 29-year-old Initiate who has earned his rank of Lieutenant in the Starfleet Corps of Engineers.

He graduated from Starfleet Academy with honors, and received his Engineering credentials with commendations from his instructors.

He has served on several Starfleet ships and starbases, before receiving word of his acceptance as an Initiate. He took a leave of absence to complete the Initiate training, and finally received the Bast symbiont after the previous host, Wilem, was critically injured in a rock climbing accident.

A specialist in structural integrity and power systems, he is also well-rounded, and possesses a solid base in every field of Engineering. After joining, the expertise gained from his previous hosts’ lives, combined with his Engineering credentials, allowed him to apply for a position in Operations.

The Bast symbiont is fairly young, by Trill standards. First joined to Lamorra Bast, a classical musician. Lamorra was a strong performer, playing in the Mak’alan Orchestra, as a featured soloist. Her specialty was the Trill piano, though she also mastered the harp, lute, and flute. She performed at several official events, such as diplomatic receptions. From her, the Bast symbiont inherited patience, a good ear for music, and learned to be very methodical and to always invest in practice.

Lamorra’s consort was an unjoined Trill male, a visual artist famous for his impressionistic landscapes and portrayals of everyday life on Trill. She was the mother of two children. She died of respiratory failure at the age of 82, surrounded by her family and friends.

The Bast symbiont went to Wilem Bast, a Trill scientist, who specialized in particle physics. Wilem was called upon to help with the war effort during the Dominion War, specifically in countering the Breen weaponry that could penetrate Federation shields. He was granted access to special research material, and studied Thalaron radiation from documents received by the Romulan delegation.

Wilem Bast’s consort was an unjoined Trill female, with whom he had three children. She was a university professor, specializing in linguistics. From Wilem, the Bast symbiont inherited a love for the sciences, a love for rock climbing, swimming and running, and the importance of being methodical and rigorous. Wilem Bast was also a teacher, mentoring Lieutenant Commander Casey during his internship at the Trill Science Academy. He also loved cooking, which is a trait that he passed on to the Bast symbiont.

Shortly after being Joined, Temerant Bast was assigned to Deep Space Eleven, in the Gamma Quadrant. As the link between Host and Symbiont was still fairly recent and thus not firmly established, Commodore Terlexa, the commanding officer of DS11 and, unbeknownst to Starfleet, leader of the Consortium forces in the area, administered a substance to Temerant designed to break the mental link between the Host and the Symbiont. He was subsequently telepathically manipulated into betraying Starfleet, and assigned to the USS Black Hawk as Chief of Operations.

The treachery was revealed during a battle with the USS O’Carroll. Injured, Temerant Bast was sent to Sickbay, where Doctor Kij detected the substance blocking the symbiotic link, and reversed its effects. Temerant returned to active service, now committed to bringing about the fall of the Consortium.