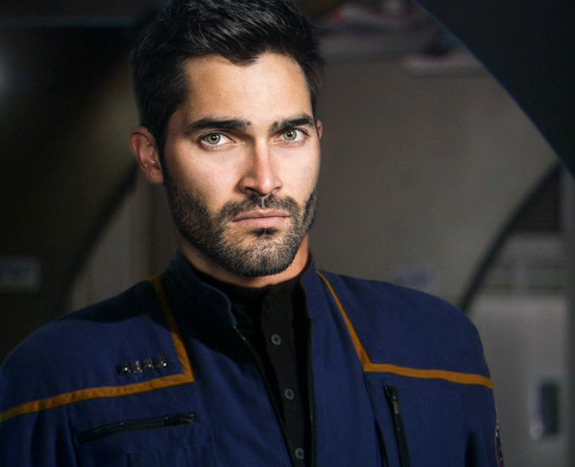 Ben Isakov is a no-nonsense individual. His military training prior to joining Starfleet had instilled in him a sense of duty which he sees as his primary guiding force in life.

Ben Isakov was born on September 2nd, 2111 in Vancouver, Canada. His parents were both in the United Earth Space Probe Agency, serving as scientists and researchers. From an early age, Ben was facinated by space and the promise of humanity reaching to the stars. During his early education it was clear that he was destined for a career in space. By the time he was 18, he enrolled into the University of British Columbia’s Astrophysics program, following his parent’s footsteps.

By the time he graduated, his interests had changed and he felt as though his talents would be better put to protecting Earth and it’s colonies, so he joined the UE Military and within days found himself in boot camp.

Thanks to his college degree, Ben was put through officer training, and spent the next four years in classrooms and battle simulators, soon, training became a way of life for him. When he graduated, his hard work paid off and he was awarded the rank of 1st Lieutenant and assigned to Proxima colony to oversee a platoon of soldiers, primarily consisting of local militia. Since they weren’t in a state of war with any major power, Isakov trained the soldiers in his platoon against pirate raids. He also oversaw the deployment of orbital defenses. For his exemplary services to the colony he was promoted to the rank of Captain and given command of Proxima Company, which consisted of all UE military troops on the planet.

By 2144, word had reached Proxima that Starfleet was looking for military officers to join, with the promise of retaining their equivalent rank. At this time in his life, he no longer felt like he was contributing anything worth while. He’d helped repel the occasional raid on the colony, but most of his time was spent sitting at a desk coordinating troop training with the platoon commanders. This notice from Starfleet seemed to be fate calling, so he put in for a transfer.

While the UE military was hesitant to let a promising young officer go, they couldn’t persuade him to stay. In a few days, Ben was on a cargo ship bound for Earth.

For the next three years he spent most of his time in San Francisco at Starfleet Academy. Given his experience in the military, he was exempt from taking some of the introductory courses that new cadets had to take. Deciding to bank on his experience in the military Ben chose the armory officer career path. He also took classes in engineering and science as needed to get his Starfleet certification.

By the time he graduated, he was in high demand by the commanding officers of the day. He was hand picked to be the Chief Armory Officer of the SS Resolute, Starfleet’s first warp 3 ship. Even though the ship was small, Ben felt proud to serve aboard her. Time seemed to snowball and before he knew it years had passed and he was given another promotion and a new position of First Officer.

In 2151 the keel for the NX-04 was laid and a year later, Admiral Forrest contacted Ben personally and offered him command of Discovery.