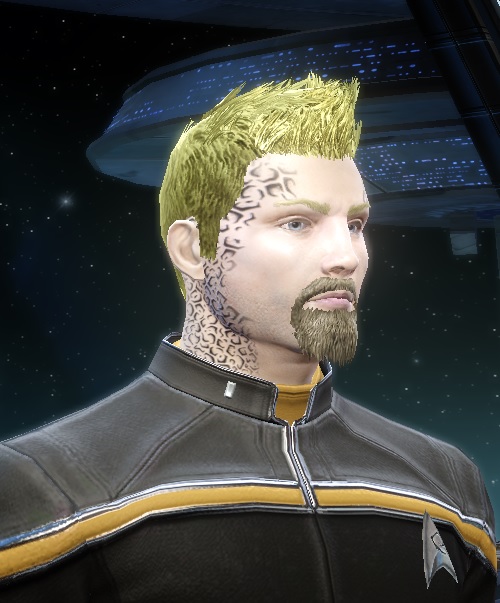 Based in the Devron Fleet Yards, Lieutenant Tarvos is the commanding officer of Task Group 44, a part of Task Force 93. Formerly a maintenance engineer on the Starbase, he joined the Command Training Program in a bid to add more variety to his duties and to challenge himself.

Joryn was born in 2371 on-board the U.S.S. Telesto, a Luna-class Federation science vessel. The first child born to Lt. Cmdr Mella Tarvos, the Telesto’s Science Officer, and Lt. Aador Tarvos who was part of the Engineering department.

He was raised and schooled on the Telesto and was fascinated by the ship’s systems, frequently following his father around, asking questions, and getting in the way of repairs. He soon learned how to bypass the parental controls on the replicator in the family quarters by mimicking his father’s voice, but neglected to alter the logs and was discovered after making himself ill with junk food. As he reached his teenage years, his father persuaded the Chief Engineer to allow Joryn to help out in the department, as much to keep him out of trouble as to encourage him to pursue an engineering career in Starfleet.

Despite being Trill and having Trill parents, Joryn has never actually visited his racial homeworld. Since the Telesto had a mostly human crew, Joryn is more familiar with Earth culture and food than anything from Trill. He grew to 5’10” in height and filed out to a large build. He enjoys Ion Surfing and the occasional game of Velocity on the holodeck when not tinkering with (disassembling) some piece of technology that has caught his interest. He is introverted and prefers to spend his free time alone, but is sensitive to the emotional states of others and can often be found socializing because his peers sought the company.

Joryn departed the Telesto in 2389 to enroll in Starfleet Academy as an Engineering Cadet. His familiarity with The Telesto’s systems gave him a head-start with the technical subjects and his classmates frequently sought his assistance when it came to technical simulations. He struggled more than most with the theoretical science classes however his classmates reciprocated the assistance and helped him to achieve decent grades.

Joryn’s first assignment out of the Academy was to the Engineering department of the Devron Fleet Yards. Initially maintaining the Starbase’s complement of small craft, he was soon included on short-range humanitarian missions to repair failing infrastructure in the local colonies that had grown much faster than intended due to the influx of Romulan refugees fleeing the Hobus supernova. The colonies were often resentful of Starfleet, believing that they were entitled to more protection than the resources allocated to the sector allowed for, and holding Starfleet to blame for leaving them vulnerable to organized crime syndicates and self-styled warlords that frequently raided or exploited the colonies. He learned how to be diplomatic on these missions, allowing the colonists to vent their frustrations and making them feel heard so that they would be more accepting of the help he came to give and more likely to report problems to Starfleet instead of undertaking vigilante action on their own. He did have one close call with an Orion ‘trader’ who believed that the aid from Starfleet undermined the local market for her products and services. Joryn introduced a harmless anomaly into the colony fabrication systems that left a telltale ‘signature’ in all items produced. After the colony was raided, the Orion trader arrived to sell the needed components but the offered components contained the anomaly in their structure, indicating that they were the same ones that had been stolen. The Orions were less than happy when their scam was exposed and attempted to kidnap Joryn, but support arrived in time and they were persuaded to leave without their ‘merchandise’.

As his experience grew, Joryn was given the opportunity to manage the refit of one of the first Atlantia class starships. New at the time of the Romulan evacuation efforts, the ship was due to be assigned to Task Force 93 in an attempt to discourage smuggling and vigilante actions in the resource-strapped local colonies. Promotion to Lieutenant (Junior Grade) came with the assignment, giving him the authority over the engineering staff working on the refit.

The refit was completed ahead of schedule with much credit due to his management of the project. His commanding officer suggested switching to the command career path to make the most of his organizational skills and offered to sponsor him as a candidate on the Command Training program. Looking for a greater challenge than a second refit project, he accepted.

On completion of the Command Training Program, Joryn received a promotion to full Lieutenant and was given command of Task Group 44, a subdivision of Task Force 93.