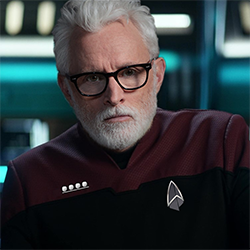 Since birth, Marc has always been fascinated with technology. Taking things apart to see how they work and then putting it back together to see if it works again. Growing up, he had parents that encouraged this type of behavior, pushing his drive to adapt and learn so he could to better understand the world around him.

Always at the center of technology through the ages, Seattle developed into the leading area for technological advancement in the Terran system. As someone who was not only born in the region but growing up around this advancement provided an opportunity to really dive in and explore. As he got older, Marc began to really flourish in tech, not a prodigy by any means but someone who understood and could advance his own development while at the same time capable of showcasing his work in an understandable way to others.

It was during his high school years that his attention turned away from hardware and the mechanics of technology to the underlying code and how just lines of beautiful syntax seemingly coming from nothing could create an operation, a function and the ability for something to work.

Marc’s proficiency with object-oriented programming started advancing at a level that was unparalleled among his classmates. He strived to continue building whatever he could to learn and develop his skill set. It was now that he really started considering the languages necessary to start programming bits and pieces of Starfleet’s library computer access and retrieval system or LCARS. The minimal scripts he began to write came to life in a way that he never thought possible the integration with LCARS was something he wasn’t ready for as it fueled his passion to develop bigger and better subsystems that could really do something amazing. Mark knew this was going to be his life was going to be his drive, his passion, his future.  the only way he could really develop into a serious programmer and maybe even some day and engineer, he would need to join Starfleet and dive right in building out more and more advanced subsystems.

In 2350, Davis had enrolled in Starfleet Academy in San Francisco.  He made sure it was well-known that he was going to join Starfleet Engineering and he was going to pursue a career in Starfleet as an LCARS engineer. During an initial assignment at Starfleet Academy Marc was bunked with a young man named Mike Kasia, an aspiring warp-core technologist who was fascinated with the development of evening faster warp drive capabilities, his passion equal that of Davis’. They instantly became best friends spending every waking moment together talking about technology about development in both the programming side as well as warp-core. They were inseparable attempting to get every class they could together and really build off each other as they became each other’s strength.

Starfleet Academy was an amazing time full of great experiences, opportunities to learn and of course making friends who like Marc, had the drive to do more in life. The year was 2354 and his time at the Academy was nearing the end.  Davis tried immensely to become an LCARS engineer at Starfleet Research and Development right off the bat but because he was not nearly at the top of his class his choice of assignments was rather limited. He accepted the first available assignment he can get his hands on and that was as an LCARS engineer for uplink subsystems at the Communications Research Center in San Francisco. His buddy Mike, on the other hand, could secure a spot as a junior officer aboard a galaxy-class Starship so that he could learn practical applications for warp use.  Davis knew this was probably going to be the last time he would see Mike for quite some time but he knew both needed to part ways and really dive into their specialties. He would see him again he was sure of it.

The Communications Research Center was a completely different beast than that of Starfleet Academy. Marc had gotten used to programming and creating subsystems in a learning environment that encouraged him to develop new and exciting things. It was a real culture shock when he got to his actual assignment and realized that his initial duties were nothing more than refactoring somebody else’s code, taking care of bugs and optimizing already-established subsystems. Initially discouraged over his lack of creativity and the constant mind-numbing programming that came with reviewing implemented code, he decided to take the initiative and start adding little subsystem scripts here in there that didn’t necessarily altered the code in any way but improved upon it.

His efforts did not go unnoticed has more senior engineers and supervisors at the research center began to take note of his additions and the improvements they were making two overall up link subsystems. In no time at all, Starfleet took notice that more and more data could be pushed uplink to ships operating across the sector at lightning-fast speeds.  the transfer of data was impressive and it provided Marc the opportunity to showcase his skill set to senior officers. After only two years of working at the Communications Research Center improving uplink subsystems, Davis was offered a promotion to Lieutenant Junior Grade and a new assignment as an LCARS engineer for development at Starfleet Research and Development. It was this assignment that Mark was going to be able to make changes, be creative and really push out code that could change and alter the way Starfleet operated because everybody else new the flow of information is what could change the course of a battle, the evolution of society and the advancement of its people.